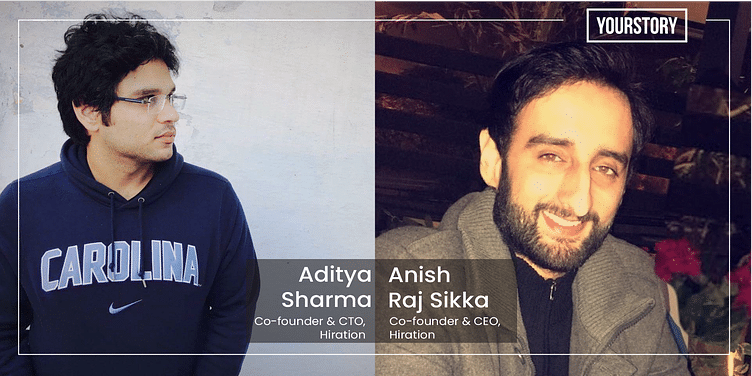 AI-powered career platform Hiration, which helps professionals create high-impact resumes, will use the funding to further develop its product, scale its operations in India and the US, and for hiring.

Hiration, a career software that uses Artificial Intelligence (AI) and Machine Learning (ML) to help professionals find a new job, has raised Rs 21 crore funding led by Prime Venture Partners, Venture Highway, and Y combinator. Amit Ranjan, one of the co-founders of SlideShare and an angel investor, also participated in the round.

Founded in 2017 by Anish Raj Sikka and Aditya Sharma, the New Delhi-based startup helps qualified candidates write an effective resume that is customised to ensure that it passes through today’s tech-powered candidate review tools and gets in hands of those doing the hiring.

Apart from directly helping professionals, the startup works with over 75 leading universities like IIT Madras, Stanford University, Indiana University–Purdue University Indianapolis (IUPUI); and edtech companies like UpGrad, Times Learning, Pearson, Edureka, and others to offer new graduates a leg up in an unpredictable post-pandemic hiring environment.

“Artificial intelligence will have as much if not more impact on our lives than even the internet. Hiration is using AI and ML to help job seekers auto-magically create resumes from scratch with little to no human intervention. Not only are these resumes much easier to create, but they are better than the ones authored by humans since they are built for humans and software alike that are evaluating them for hiring positions.”

“Hiration wants to help job seekers in all aspects of their job search process. They also have an impressive roster of world class universities, job boards, and companies using their technology. Prime Ventures is very excited about this missionary set of founders as they transform the hiring market,” he added.

Starting up and the problem it solves

The startup leverages AI and ML to help job seekers build and optimise their resumes to ensure they rise to the top, providing a crucial differentiator to applicants vying for the most competitive companies and roles.

Anish and Aditya met during their MBA programme at IIM Calcutta, where they were given intensive training on the art of finding a job such as networking, writing great resumes, and preparing for job interviews.

“But when we were hiring at our last startup, we saw how today’s hiring technology is tilted in favour of the companies that are hiring. We realised that while people invest time and money learning the skills for their jobs, they aren’t taught how to excel at the hiring process. We saw this as an opportunity to offer the same technology to job candidates, offering tools to those who may otherwise have been overlooked because they didn’t have access to the same resources or training,” adds Anish.

According to the co-founders, they faced these issues while graduating and while looking for jobs.

“We didn’t have anyone to help us out. When I was job hunting, I sent my resume to many recruiters, but they weren't focused on getting me a job. Instead, their focus was to help companies close the open positions,” adds Anish.

Anish quickly realised that this was the same case with family members, friends, and colleagues. Almost everyone has a tough time when they decide to look for a new job - because it is a tough process which no one is really trained for, unless you have the fortune of getting into a good B-School.

Ultimately, the market seems to favour people who have more knowledge about the job search process than people who might be more skilled. The duo wanted to level the playing field by democratising career and job change related information.

“We want to create a one-stop personalised digital career assistant for professionals to manage their careers - anything and everything career related will be solved by Hiration,” says Anish.

Working behind the scenes

While resume writing, optimisation and design is the core of Hiration’s offering, the platform’s customised flow also supports job seekers throughout the different stages of finding a job, including writing cover letters, creating online portfolios, optimising LinkedIn profiles, and comprehensively preparing for interviews.

The company is a team of 20 people. Anish explains that for the first two years, the startup was bootstrapped because it wanted to get to the core of the problem.

“We spoke to 2,000+ professionals over two years, manually wrote resumes for 1,000+ of them, conducted mock interviews, updated their LinkedIn profiles, etc. We were coding our software product parallelly and launched the same in 2018,” adds Anish.

The main challenge at this point was liquidity. They hired a team of eight people and were focused on making revenue from Day 1. We made it through the services that we offered – and then eventually we shifted to revenue from our software product.

“Over the past three years, we’ve analysed millions of job postings and resumes to identify signals that determine whether a candidate is suitable for a job or not. Making sense of data at this scale has only become possible with the recent advancements in natural language processing and deep learning. Using OpenAI's GPT-3 and other in-house machine learning models, we have developed a career assistant that guides job seekers in real time, while they are crafting their resume or preparing for their interview. As a result, our users end up getting better jobs in less time than they otherwise would have,” said Aditya.

The market and plans ahead

HR technology is a significant part of the human resource industry. According to a report published by Grand View Research in February 2020, the human resource management market is anticipated to reach $38.17 billion by 2027, registering a CAGR of 11.7 percent from 2020 to 2027.

Hiration charges job seekers Rs 399 for one month and Rs 899 for a year to avail its services in any industry. Some of the other startups operating in the space include Dockabl, HireSure.Ai, DarwinBox, and others.

Samir Sood, Founder, Venture Highway, said, “While multiple players are solving for recruiters, we have not come across platforms that are focused on candidates and meaningfully solve for the entire candidate employment journey. Hiration is building a uniquely powerful, customised career platform for job seekers, which is candidate first and tech-first, starting with an automated resume offering. There are strong tailwinds for this model due to the pandemic. We are very excited to partner with the Hiration team as they continue to disrupt the employment vertical.”