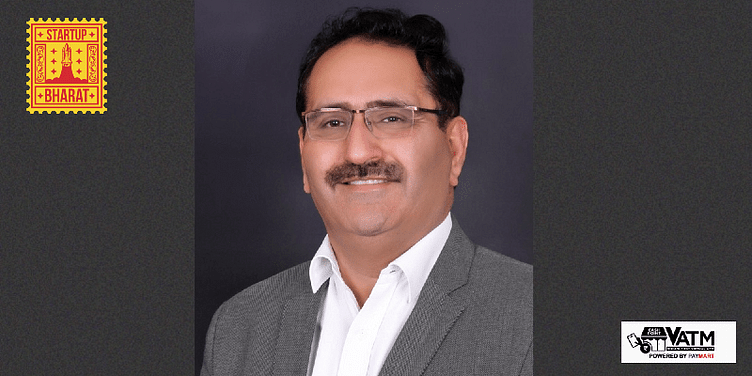 Founded in 2018 by Amit Narang, Chandigarh-based startup PayMart eliminates the need for an ATM, Micro ATM, or a POS machine to withdraw cash.

Digital transactions may have received a booster shot during the pandemic, but cash still continues to drive a majority of transactions in India.

While cash withdrawals from ATMs continue to surge, their low penetration and accessibility are worrisome factors. The distribution of ATMs across India is erratic with only 17 machines per lakh people. In some places, people still have to travel miles to withdraw cash.

This is the gap being bridged by technology platform PayMart, which converts next-door merchants, retail outlets, kirana stores, pharmacies, restaurants, and petrol pumps into virtual ATMs, and enables cash withdrawals through them.

Founded by serial entrepreneur Amit Narang in 2018, the Chandigarh-based startup has built a network of over 50,000 merchants across Mumbai, Chandigarh, Ambala, Mohali, Indore, Ahmedabad, and Delhi, and has tied up with reputed banks of India.

It took Amit almost three years to get permission, build a strong merchant network, and convince stakeholders to join its platform.

In a traditional setup, a debit card is inserted into an ATM/Point of Sale (POS) machine that sends the request to the core banking system. The request is processed and the account is debited with the required amount, instructing the ATM software to shell out the requested cash.

Once a customer sends the cash withdrawal request on its mobile banking app, an OTP is generated by the bank. The customer can take this OTP to any nearby partnered merchant who feeds it into PayMart's software on his phone and processes the request.

Once approved by the bank, the merchant hands over the cash to the customer, whose account is debited.

The platform receives a fee per cash withdrawal from the bank and shares 70 percent of that with the merchant. The merchants receive a consolidated commission by the end of the month while cash disbursed by them is credited into their accounts on a regular basis.

The service remains free for customers.

PayMart is Amit’s second venture. He had worked with Paul Merchants, Foreign Exchange Western Union, and other financial service companies for almost 30 years before taking the entrepreneurial plunge in 2013 with service startup FX Mart Pvt Ltd.

FX Mart, which operated in the electronic payments, remittance, foreign exchange, and travel-related businesses, was acquired by Flipkart in 2015 and rebranded as PhonePe, which is one of the largest payments companies in India.

“We are the world’s largest cash economy and an ATM deficient country at the same time. The current cash withdrawal mechanisms are inadequate to satisfy the extensive demand for cash across the country. A pan-India virtual ATM network can help in correcting the existing mismatch,” says Amit.

Besides the virtual ATM opportunity, the platform has received a foreign exchange license and will commence operation in future.

It also conducts regular digital literacy camps in association with banks across the country. The startup has tied up with corporate partners like Shop Kirana, Altruist, and SR Plus for expanding its merchant network.

PayMart claims to have gained the first-mover advantage in the virtual ATM space in India. There is a huge opportunity, given the dearth of ATMs in a highly cash-driven economy. There are over 100 crore bank accounts and cash withdrawals exceeding Rs 1 crore per annum.

A lot of banks and fintech companies like Mswipe are working in the microATM (POS Machine) space while platforms like PhonePe provide ATM service to their users via nearby partnered merchants.

“We eliminate the whole requirement of ATMs, POS terminals, biometric devices, or any other kind of hardware. India’s smartphone penetration is currently 44 percent and is expected to be 51 percent by 2025, which will complement our smartphone-based transaction flow,” says Amit.

Besides next-door merchants and Kirana stores, the startup is targeting petrol pumps, forex terminals, pharmacies, restaurants, and hotels, which could disrupt the cardless cash withdrawal market in India.

Global companies like Sonect AG, Socash, and Spare CS Inc are already operating in the space and transforming nearby shops and stores into ‘cashpoints’.

Moving forward, PayMart plans to close a Series A round of $2 million by next quarter.

“Our aim is to capture 10 percent of the ‘cash-out’ industry and expand the merchant network to over 10 million by 2026,” says Amit.

The startup is also in advanced talks with banks and big retail chains like Big Bazaar, VMart, and petrol pumps.

“We will be in a position to break even in the next three years of operations and expand our suite to offerings such as payments, insurance, loans, and remittances to build a full-stack fintech platform,” says Amit.