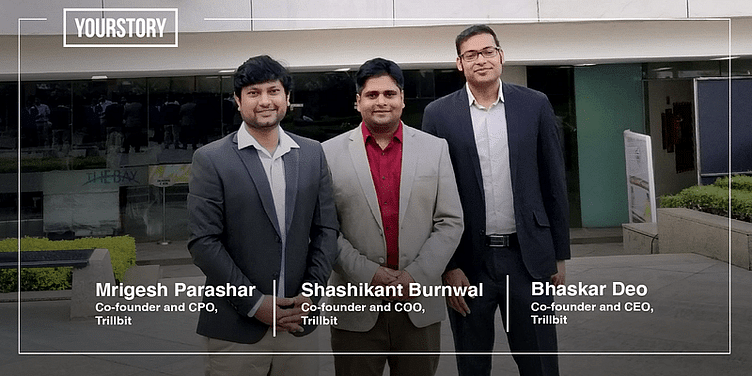 Boston-based Trillbit, with an office in Bengaluru, raised $1.5 million from Refex Capital and Good Growth Capital. The funding will be utilised for business development activities.

According to an official statement, the startup will be utilising the funds for its business development activities.

Founded in 2017 by IIT Kharagpur and ISB alums-Bhaskar Deo, Shashikant Burnwal, and Mrigesh Parashar, Trillbit’s proximity intelligence platform lets standard audio speakers, smart devices communicate and authenticate without the need for the internet or any additional hardware. It is aimed at disrupting the authentication space by creating the “Internet of Sound.”

The Techstars and Cisco-backed startup has built a technology that sends data over an acoustic channel to enhance end-user experiences and add value to existing hardware. Any existing device that has a microphone can operate using its platform with no added infrastructure.

“Trillbit’s aim is to lead the IoT authentication space with the most secure and seamless solution, and the funds will be used for business development activities in the USA and other geographies. Not only will we be catering to existing use cases of device setup and authentication but we see a bigger opportunity here. Voice commerce is expected to explode and so are deep fakes which is a big problem for voice commerce. We are the only protocol that is PSD2 compliant and truly brings authentication to voice commerce and circumvents deep fakes, ” Bhaskar Deo, Co-founder and CEO said in a statement.

The startup claims to be working with several companies across India and the US for several applications ranging from device provisioning to device authentication.

Sridhar Parthasarthy, Managing Partner of Refex Capital, said that newer technologies are being adopted at a faster rate across the globe.

“Globally, the adoption of newer technologies is happening at a pace never seen before. This has been made possible by smarter and cost-effective IoT devices which, according to a global study, are expected to triple from the current level by 2025."

"A strong foolproof authentication mechanism and a seamless provisioning process have become two important prerequisites, and we see Trillbit’s compelling solution providing frictionless connectivity playing a significant role in addressing this. Our interaction with some of the global tech majors reinforces this. We are quite impressed with the Trillbit’s team and are excited to be part of this journey,” Sridhar added.