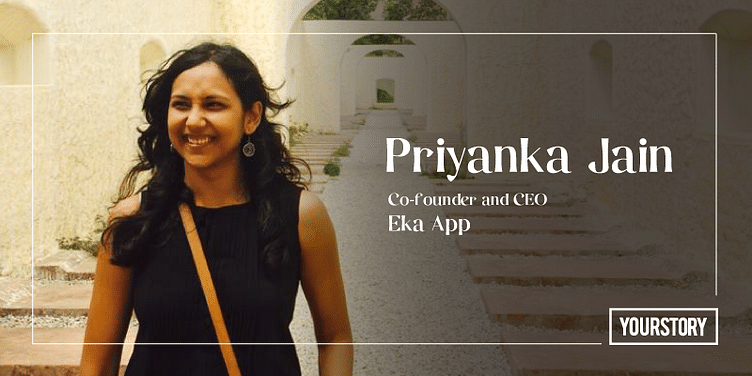 A chemical engineering student from IIT Bombay and a consultant for three years, Priyanka Jain felt her job lacked a purpose. Wanting to do something different, she quit her high paying job and volunteered for non-profits, working briefly for social enterprise Technoserve.

Her work in the social impact space helped her focus on mental health, wellness, and yoga and got her to start the Eka app in 2019.

The app has daily meditation classes four times a day to help people take a break from anxious and stressful life, and learn the tools and techniques to manage the mind – directly with a teacher.

Priyanka says it wasn’t a single experience that helped her take the entrepreneurial plunge, but several journeys throughout her life.

She says, “I worked on a project to enable livelihood opportunities for Tibetan refugees in India. I stayed with them and spent time with the refugees and Buddhist monks. That project left a deep impact on me, and I got very interested in the impact sector, and immediately, I tried to start a social enterprise in the crafts space, where I spent time working with rural artisans.”

Reskilling and understanding the energy sector

While pursuing her MBA from Cambridge Judge Business School, the UK, Priyanka interned with a startup in the energy management space and travelled to Africa for an e-learning project.

“After returning to India, I worked with environment and energy startups in the water and solar sectors and travelled widely to rural India to understand the water and energy problems on the ground,” she says.

While working in the impact sector, Priyanka realised that action depended more on the people who were facing the issues.

The need for working on the self

“Self-esteem, motivation, confidence, common sense, and positivity differentiated the very few who did well even in dire situations. I am not saying people don’t need charity or a good government, but what they need more is a belief in their own self, a sense of purpose, and a sense of right and wrong,” explains Priyanka.

She was inspired by the very people she thought she wanted to help. Around 2014, Priyanka was introduced to yoga, and she became a regular practitioner.

“I was deeply drawn to yoga, and completed my 200 hours yoga teacher training course in 2018, and more than that, I have practised yoga almost every day for many years now. It also led to the birth of the Eka app,” she says.

Not the first but different

Priyanka agrees this Eka isn’t the first yoga app in the market. Other apps include Daily Yoga, Asana Rebel, Yoga Studio, Gaia, Down Dog, and others.

She says, “Often, yoga is understood as only a physical practice. Yoga originally was a practice for the mind, and the higher practices of yoga, such as pranayama, yoga nidra, and meditations, are not well understood. As people grow in their yoga journey, they begin to see the importance of these higher practices. And, yoga as a whole, is emerging as a complementary practice to manage mental health issues such as anxiety and lack of focus.”

“After my daughter turned two, and as I finished the teachers’ training, I was contemplating on how to take yoga to more people. At the same time, my husband was looking to expand his business. We already had the funds and the initial team. I started researching this space vigorously, and after just a few weeks of research, we launched Eka,” adds Priyanka.

She says the startup found great teachers, such as Swami Yogaratna Saraswati and Bernie Gourley, who have played a key role in designing the Eka programmes.

“Eventually, I also found someone equally passionate about this space, Sudeepta, who joined me as my co-founder. Over time, our app has been greatly appreciated for anxiety relief. We have a few psychologists who recommend our app to their patients,” says Priyanka.

The startup claims the Eka meditation and yoga app has over two lakh installs. It offers three subscription models — Rs 249 per month, Rs 599 for three months, and Rs 1499 for annual subscriptions.

“We have four 20-minute daily meditation classes at Rs 749 per month, where you can learn and practice with a teacher,” says Priyanka. The startup’s goal is to combine the best of the Eastern and Western philosophies and bring a variety of approaches to the user to manage mental health issues.

“My advice to everyone will be that work can be either a source of anxiety or it can be a great concentration tool for the mind, which brings peace, calm, enjoyment, and satisfaction,” Priyanka adds.

Priyanka recommends everyone find work they enjoy and keep evaluating whether their work is a source of calmness or anxiety. “Money comes, at least the money we all need to live joyfully comes,” she says.