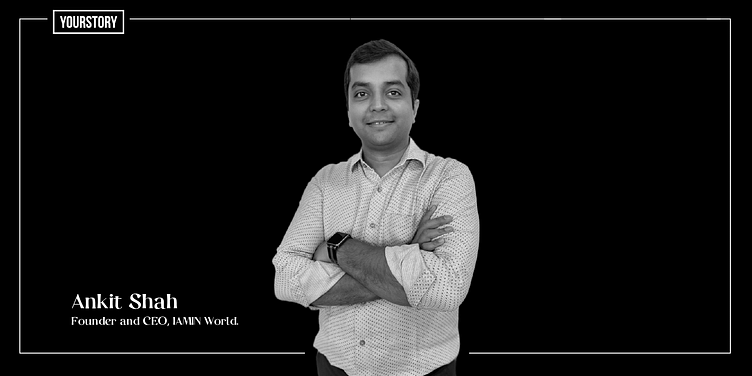 Mumbai-based edtech startup IAMIN World startup is focusing on building one vital life skill in children and teens: financial literacy. It makes finance and its concepts easy to understand and implementable.

Ankit Shah knew which space he wanted to start up in long before he decided to start up: financial literacy for children.

Aware that most children have no knowledge or training in this vital life skill, Ankit launched Mumbai-based financial literacy platform ﻿IAMIN-World﻿ in July 2020. The startup aims to help children and teens get started on their financial literacy journey early in life so that they are empowered to make smart money decisions. It also allows the target audience, children attending Classes 1-12, to kickstart their investing/saving journey early, with real money.

“IAMIN World makes finance and its concepts easy and implementable, making this life skill interesting. In India, parents do not talk about money to their children and teens, leaving them to gain their own understanding in college or jobs. We are looking to solve this fundamental problem of not understanding finances at an early age,” Ankit says.

He adds he feels extremely strongly about this space as the habit of keeping accounts was inculcated in him by his father at a young age.

“He offered inexhaustible pocket money on one condition; I needed to keep a record of all the purchases and carefully save all the bills. If I bought from a store that wouldn't issue bills, my father asked me to simply stop going to that particular store,” he recalls.

When he was 19 years old, Ankit also borrowed some money from his father to invest in the stock market and lost 90 percent of it. The lesson learnt was that “one needs to educate oneself before investing”.

“The third reason is my daughter. She’s eight years old now, but was five when she was adamant about owning a toy van. So much so, that she broke her piggy bank, asked for contributions from family, and was still falling short of the Rs 10,000 she needed until I chipped in. This process made her value not just money but also what she purchased with it — the toy that she continues to play with,”  Ankit says.

Learning to value money is important, and that’s what IAMIN World wants to help children and teens do.

How Dunzo scaled its revenue by 1.6x in FY21 with a focus on Dunzo Daily

Once Ankit had the idea, he worked to build his team through mutual connects and references. An MBA from SP Jain Institute of management , Ankit earlier ran his family business, which is into real estate and plastic manufacturing. Today, the IAMIN World team is 15-people strong.

The name of the startup, IAMIN World, reveals the founder’s philosophy. The I AM IN denotes “I am investing”, and the platform focuses on five important quotients of financial literacy: spend, save, invest, earn, and learn.

For Classes 1-3, this could be learning about the concept of money, experiencing real money in reality, handling skills, the idea of financial security, basic finance terms, implementation of financial ideas, and learning to save, invest, buy, and spend prudently.

The sessions take a deeper dive into the world of finance for teens studying in Classes 10-12. The focus is on real-life skills that matter: estimating future income, monitoring bank balance, meeting financial commitments, the concept of insurance, student loans, paid employment and self-employment, and setting priorities in spending.

The modules may differ, but the end goal is the same: building a solid foundation in finances, learning to be smart about money, and being equipped for a better financial future.

Every child who signs up has access to a learning platform where they can learn at their own pace.

“We have made the programme in a web series format where we will be releasing a new episode of learning every week. Along with the LMS, every individual will be exposed to real-world tools like a prepaid card, app, and personality cards. These tools are limited to only senior group learners from Classes 7-12,” Ankit says.

The team has partnered with RBL bank for a prepaid card; the bank uses the parents’ KYC.

With children under the age of 18 constituting nearly 41 percent of India’s total population, fintechs have found a new and thriving customer base.

Startups such as Birdfin, a fintech app that teaches children money management through gamification; ﻿FamPay﻿﻿, India’s first neobank for teenagers that lets parents track spending and savings; ﻿Finin﻿, a neobank that provides AI-driven insights on expenditure and tracks savings; and ﻿Walrus﻿, a payments app for teens, are creating big waves in the fintech for children and young adults category with their creative offerings.

“Our business model is enrolment fees. As an edtech startup, we are selling programmes where parents enroll their kids after paying admission fees.  Since we are completely digital and the content is already created by us, the unit economics will work in our favour as we can scale rapidly. However, the unit economics will be highly dependent on the customer acquisition cost,” Ankit says.

“We have plans to take this product global as there is a need worldwide for parents to raise money-smart kids. We plan to launch internationally in three months. Over the next 12 months, we see ourselves present in at least five-plus countries,” Ankit says.