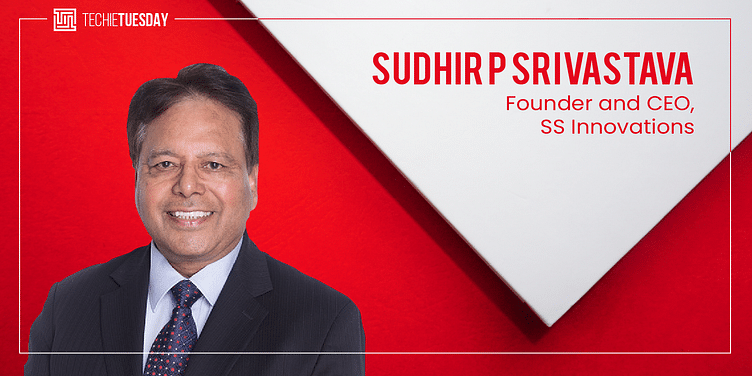 In this week’s Techie Tuesday, we feature Dr Sudhir P Srivastava, a surgeon who is known not only for his robotic surgeries, but also for building robotic surgery products with his Delhi-based company, SS Innovations.

One of nine siblings, Dr Sudhir P Srivastava’s decision to get into medicine was a personal one. The son of an English literature professor, Sudhir would draw inspiration from biographies of the great leaders in the world.

“The hard work and sacrifices they made motivated me to do better,” Sudhir says. A desire to make a difference led him to look at medicine, and he graduated from JLN Medical College in Jaipur, Rajasthan, with an outstanding student award in 1970.

Sudhir went to the US in 1972 and while practising as a surgeon there found that the popularity of minimally invasive surgery was growing at an unprecedented speed.

“I did some pioneering work between 1998 and 2000, and found that minimally invasive surgery had many remarkable features that conventional surgery lacked. This was when the Da Vinci system (robotic system) received FDA approval and hit the market successfully,” he recalls.

[Techie Tuesday] From building interfaces for mammograms to automating customer workflows, how Intuit’s Namita Devadas found her calling in coding

In July 2002, Sudhir founded Alliance Hospital with 10 other doctors in Texas. The facility was considered centre of excellence for treating cardiovascular disease in Texas.

Sudhir says he had an amazing stint as the chairman of Alliance Hospital for four years, and would spend hours researching how to provide the best medical services to patients.

“My search took me to robotic cardiac surgery. I got involved with robotic cardiac surgeries and was also a part of the trials for FDA approval of the Da Vinci system for coronary bypass surgery. During this period, I performed the world's first single vessel beating heart TECAB in the US, and proceeded to perform the world's first double and triple vessel TECAB on a beating heart,” he says.

Sudhir is still actively associated with the Society of Thoracic Surgeons, AATS, and International Society for Minimally Invasive Cardiothoracic Surgery (ISMICS) as a member and the founder of the Robotic Revascularization Society.

“My life and career were good and settled, but I wanted to come back to India. In 2011, when Fortis invited me to launch the robotic surgery programme in India, I packed my bags and came back,” he says.

Rediscovering his love for robotics

In 1996, he was introduced to minimally Invasive Direct Coronary Bypass (MIDCAB) Surgery in West Texas in 1996. Then in 1997, he became the first surgeon to perform Quintuple Coronary Artery Bypass Grafting using the Heart Port System.

Recollecting his love for building and experimenting with spacecrafts when he was in Classes 7 and 8, Sudhir in 2011 decided to start his company SS Innovations in Delhi, to build robotic surgical instruments.

“I started to seriously look at surgical robotics in 2009. At that time, I visited some universities where the early stages of surgical robotic development were on. I subsequently went to Germany to explore this further,” Sudhir says.

[Techie Tuesday] From working on oil fields to building an AI startup that was acquired by a Valley unicorn: Deepti Yenireddy’s journey

The price of building robotic systems and arms, however, is high and time consuming.  Sudhir decided to bring his design, surgery, and tech experience to build prototypes and create products that are needed for surgery, and make the whole process as less invasive as possible.

The core technology that he decided to build and work on included:

“Lack of awareness and heavy costs were a great hindrance, and I am now working on both these aspects. SSI Mantra is an outcome of years of research and working in this direction, and I am happy that this advanced robot will be soon available to the world,” Sudhir says.

Currently, Sudhir and a group of scientists and engineers are working on a multi-arm surgical robotic system called Mantra. They are also in the stages of development of single-arm applications to include automated ultrasound as well as a camera pulling application.

“We will be involved in various diagnostic applications using robotic arm and focused targeted therapies as well. In the future, the idea would be to remotely control a lot of these technologies to be able to bring it to areas normally deprived, in relation to access to high-level medical technologies,” Sudhir says.

The team has gathered data to design and develop some novel technologies to facilitate the future in Robot Assisted Minimally Invasive Surgery. These include:

OMNI 3D HD™: Designed to provide a live 3D HD view of the surgical field to the entire surgical team in any robotic surgery operating room. A comprehensive high-definition 3D Video visualisation system, it can be paired with the MANTRA™ Surgical Robotic System to aid the tableside surgeon and the surgical teams in assisting the most challenging robotic surgeries.

An identical 3D HD view through the Omni 3D HD™ enables the surgical team to be in better synchronisation with the surgeon on the console. The surgical team is highly benefited by an improved depth perception, which helps in easier coordination and higher control to the tableside surgeon.

It also enables better teaching and training of trainees, and has recording, playback and live streaming capabilities. The OMNI 3D HD™ can be used for tele-training and tele-mentoring.

Multi-Fire Clip Applier: A unique clip applier that eliminates the need for removal and reload of the clip applier, this will make the surgical task more efficient.

[Techie Tuesday] After building systems at Trilogy, Myntra, and Amazon, he aims to simplify financial inclusion with Chqbook

Sudhir believes his decades of experience in robotic surgery “helped me chose my team very carefully”.

“Proper training is the biggest challenge for robot-assisted surgeries. So, we ensured that all our team members know the nitty-gritty of this cutting-edge technology and created our in-house talent pool,” he says.

However, the pandemic was tough for Sudhir and SS Innovations as it became difficult to continue work at the same pace.

Raising funds and reaching out to doctors and other stakeholders was affected.

“We had placed orders for components and electronic parts essential for manufacturing surgical robotics systems, but they did not reach us as per schedule because of the pandemic. Despite these odds, we continued our trials and our commercial launch for SSI Mantra is scheduled later in the year,” Sudhir says.

The 40-member SS Innovations team aims to miniaturise current surgical robotic systems, develop specialty specific procedures and robots, and initiate simulation at every level so surgeons can practise without needing to practise on humans.

Sudhir believes India has tremendous talent and various engineering colleges, IITs, and different technical fields. However, limitation of resources means these students “do not get hands-on experiences on updated and most recent technologies that are available otherwise”.

“They have tremendous theoretical knowledge but practical applications are generally not taught in colleges. This creates a challenge in terms of hands-on experience to be able to implement things faster. Indians are present in all significant technology hubs in the world, leading to the mass-level brain drain from India, which is affecting the Indian technology landscape,” Sudhir says.