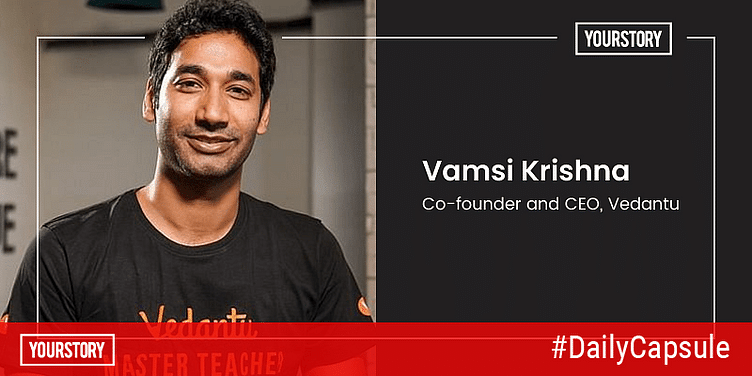 India just got its newest unicorn as ﻿Vedantu confirmed that it has raised $100 million in Series E funding led by Singapore-based impact investing fund ABC World Asia. The round also saw strong participation from existing investors — Coatue, Tiger Global, GGV Capital, and WestBridge among others.

With this raise, the live online tutoring platform’s valuation is at $1 billion — making it the 5th edtech startup to turn unicorn after ﻿BYJU'S﻿, ﻿Unacademy﻿, ﻿Eruditus﻿, and ﻿upGrad﻿.

In a candid conversation with YourStory's Shradha Sharma, ﻿Vedantu﻿ Co-founder and CEO Vamsi Krishna takes us through:

- being an early entrant in the online education space

- the challenges and learnings from Vedantu's early years

- how Vedantu’s philosophy is designed to disrupt the ‘herd mentality’ in learning,

- what makes him happy about the milestones achieved so far.

“But what I am really proud of today is the fact that from the first live class I took in 2014 till date, there are now millions of students doing this and this is becoming mainstream. That is something that makes me happy and proud.”

Being the largest player in the K12 segment, the edtech unicorn is open to making strategic acquisitions in categories where it does not yet have a presence.

Vamsi also revealed that Vedantu is eyeing an IPO over the next two to two and a half years. However, the edtech startup's core focus, Vamsi emphasises, remains that of building a long-term sustainable company that continues to centre on innovation and impact.

Vedantu plans to use these funds primarily to strengthen product engineering functions, as well as expanding into newer categories through both organic and inorganic routes.

Vedantu is the latest among 27 startups that crossed the billion-dollar valuation this year, surpassing all projections by research firms and industry experts.

Between January and August 2021, edtech has been among the top three funded sectors, inviting over $1.9 billion in capital across 80 deals, according to YourStory Research.

Click here to find some useful tools to help you find the nearest vaccine centres in real-time.

Kamal Bali, Managing Director of Volvo Group India, tells EnterpriseStory about the trillion-dollar manufacturing opportunity for India. And why it is essential for the country as a competitive advantage.

Recently, ﻿Freshworks﻿ became the first Indian B2B SaaS unicorn to be listed on NASDAQ, raising $1.03 billion at a valuation of over $10 billion.

In an exclusive interaction with HerStory, Girish Mathrubootham, Founder and CEO, Freshworks and Suman Gopalan, CHRO, Freshworks talk about how the NASDAQ-listed company was able to create an executive team comprising 33 percent women. Read more.

Building the ‘Shopify for hotels’

Many small and medium-sized hotels continue to depend on legacy processes and/or decadent software as they don't have in-house tech teams to build customised products.

Bhubaneswar-based SaaS startup ﻿Bookingjini﻿ aims to help hotels convert “lookers to bookers” by making passive visitors on their website transact instead of letting them drop to completing the booking on aggregator platforms. Read more.

“While unicorn statuses are consequences and though an important milestone, but what I am really proud of is a million students learning online, and edtech becoming mainstream.”