Aditya Ghosh, Board Member of OYO and Fabindia, shares his framework to get more women decision-makers at the table 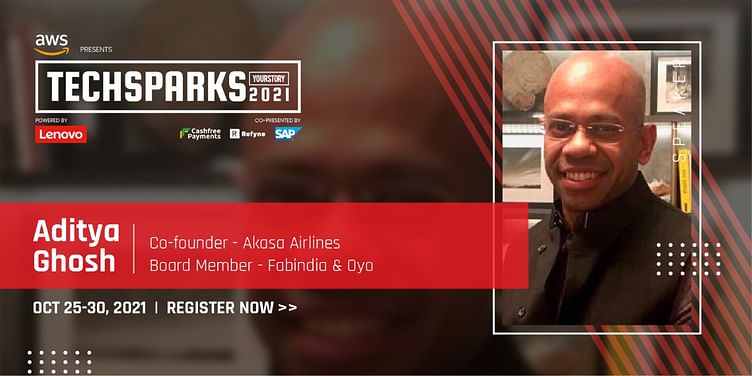 At TechSparks 2021, YourStory's flagship startup tech event, Aditya Ghosh, Board Member of OYO and Fabindia, spoke about how he is ensuring an increased women representation across corporate hierarchy.

India is at the cusp of a technology transformation fuelled by the digital economy. Yet, the contribution of women to India's GDP is 18 percent, one of the lowest proportions in the world. Moreover, the COVID-19 pandemic has forced more than two million women to consider either taking a leave of absence or leaving the workforce altogether, according to McKinsey.

At the launch of Elevate, YourStory’s private community for emerging women leaders, Aditya Ghosh, Board Member of ﻿Oyo﻿ and ﻿Fabindia﻿, opened up about various practices he implemented during his tenure at Indigo, which led to the increase in women representation across all levels of the corporate hierarchy.

Around 15 years ago, Aditya decided to make the hiring process at Indigo gender-equal by bringing in policies like equal pay for equal work and equal opportunities for all genders. But policies are only as good as their implementation.

“One of the rules I set is that even the initial lot of candidates that we evaluate has to be a 50-50 in terms of gender ratio,” he said.

This way, Indigo ensured that its hiring funnel had equal representation, and the probability of women taking up leadership roles was not stacked against them.

As a result, over a third of Indigo’s top leadership team under Aditya were women.

[Women in Tech] Inclusion means being open to ideas and leadership styles fundamentally different from the norm: Sandhya Balakrishnan of Brillio

Retaining women at the top and leading by example

Aditya recalled another example during his stint at Indigo, wherein a senior women executive from his team decided to quit the firm to focus on her daughter's Class 12 board exams.

This female executive led Operations Control at the company, a role that is known to involve high stress and long work hours. Acknowledging the problem, Aditya pulled all stops to retain this executive while solving for her constraints.

For instance, he introduced a new practice of flexible working hours to stop women professionals from dropping out of the workforce or taking a break in their career due to avoidable personal reasons. He even ensured that the said executive followed this practice.

“I would call her office extension, not her mobile. And if she picked up the phone, I’d ask, what are you doing in the office? Aren't you supposed to be in the car already? I did this for about a month,” he said.

The aim was twofold — to retain top talent, and set an example for other leaders in the organisation to foster the same culture.

These practices are significant and more relevant in a post-COVID-19 world. As stated above, the challenges created by the pandemic led to two million women leaving the workforce. This is a huge step back towards achieving gender equality at workplaces.

Changing career paths is difficult. And that’s one area Aditya personally navigated through too. Interestingly, he was a lawyer, working with J Sagar Associates and IndiGo was one of his clients. He eventually joined IndiGo as legal counsel, and four years later, became President at the firm. Under his leadership since 2008, Indigo became the most profitable and the largest airline in India.

However, for women, a break or a shift in their career mid-way can be a bigger pain point. For instance, women get discouraged from returning to work after a break in their career due to many reasons but the most important is the misconception that they will not be able to cope up with the fast-paced environment and the changes that have taken place since their departure.

On being asked about a framework for a career switch, Aditya explained how he solved it at Indigo. “I introduced the concept of internships in other functions as well. So you get exposed to new areas of work, and you realise what you're good at and what you're not. And if you're good at something, you start developing those skill sets,” he said.

This was more beneficial for women who were looking to switch careers due to personal reasons. For instance, a flight attendant looking to take a more permanent job at the front desk or corporate office. “Usually, career progressions in these jobs are very linear. But we changed that,” he said.

Is the technology ecosystem doing enough?

“I think the tech world is still very, very male-oriented. The whole thing of hustle is important and that basically means that you sacrifice everything else... And that shocks me” said Aditya.

Last but not least, he opined on the approach we should take to increase women representation in the ecosystem.

“I think this shift that has definitely happened is definitely a policy and compliance-oriented thing. The shift that needs to happen even more is, one, we've got to do it much faster, and we have to just try a little bit harder to take that to reality. People need to try harder, and they can't give up. Otherwise, it'll just be something that will show up in a compliance report. We need to go deep into the weeds to ask — why  is it happening?”