On building a legacy, leaving the world a better place, and being appreciated for his brains: Steve Wozniak speaks his mind at TechSparks 2021 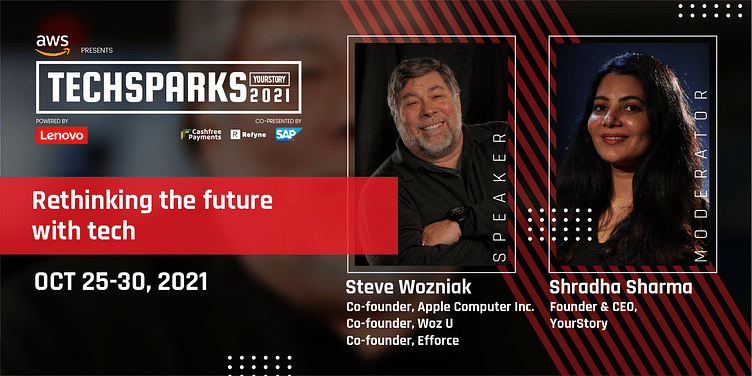 The things Steve Wozniak has picked up in his life building not just one successful company, but many, could fill a book. At TechSparks 2021, we take a sneak peek.

﻿Apple﻿ Co-founder Steve Wozniak recalls the time in his life when he told his father he’d rather have a computer than a home. An avid tinkerer of things, and a true blue engineer, he says his vision when he founded Apple Inc, along with Steve Jobs, was to revolutionise the personal computer space.

It’s common knowledge today that HP —  known at the time as Hewlett-Packard —  rejected the Apple Computer I because it was inconceivable that a computer could be so small. And although it hurt at the time, Steve says in retrospect, it was probably the best thing to have happened.

“HP couldn’t see the product the way we’d envisioned it... And it was probably good they rejected us —  I think I wanted them to turn us down. It inspired us even more,” he told Shradha Sharma at YourStory’s TechSparks 2021 event.

His lesson for young entrepreneurs today comes from the rejection he faced at HP —  have one good product that you can place your conviction in, and take it all the way.

He added that everyone, especially the young brains of today, should build a small company they’re passionate about, and have the ability to impact the world. More importantly, though, people building companies should remember to have fun.

“I believe so much in happiness and laughter. I believe happiness is smiles minus frowns.”

It was for that reason —  happiness —  among others, that Steve says he transitioned out of Apple to go build something that made him happy and passionate.

“I’m an inventor and an individual. At the time I left, Apple had grown too big for lone engineers to come up with something on their own. I had another idea, so I went out to make it happen,” he said, adding “the most fun thing in life is to have a company of your own, where you can keep building things.”

Intelligence and ethics over money

Steve said if he could have the world remember him for anything, it would be his brains. More than big money or big power, he hopes engineers appreciate him for his intelligence and his work.

And that philosophy of placing “intelligence” above everything else reflects in the way the maverick does things today at ﻿Efforce﻿, a platform that allows contributors to benefit from the energy savings generated by energy efficiency projects worldwide, using blockchain technology.

For engineers building AI/ML today, he said the important question they need to ask their technology is what good it can do for the world, and how intelligent it really is.

“Intelligence always should be able to take the next step on its own,” he said.

And while intelligent tech and machine learning has helped make the world a smaller place, Wozniak alludes to the fact that the social web and targeted ads today skew people’s intelligence and instils behavioural biases —  all of which is a problem.

"Ethics are the most important thing of all. Transparency is at the heart of everything. Unfortunately, today money outweighs ethics and money outweighs the truth. We have 200 different internets today..every country has its own..It’s very painful for some of us to have seen a beautiful world and then see it taken away," he said, adding he might build internet of his own one day.

On building tech for the future generation

When he isn’t building something that, for most of us, would be straight out of a sci-fi novel, he thinks about the environment, clean energy, and how tech could help make the world a better place.

Having been an environmentalist all this life, he laments the lack of things from the environment that gets passed down to the next generation.

“All my life I thought, we would turn over the same river, clean air and water to our upcoming generations. Every year it’s something less —  that’s a big problem. Every generation gets a little less than the generation before,” he said.

Privateer, his space-tech startup, is his effort to clean up space debris and launch manned and unmanned space missions.

“I am so happy, I can’t stop working for some reason. I am so busy. There may come a time when I can sit and fish each day,” concluded Wozniak.

But until that day, it’s onwards and upwards for Steve ‘The Woz’ Wozniak.