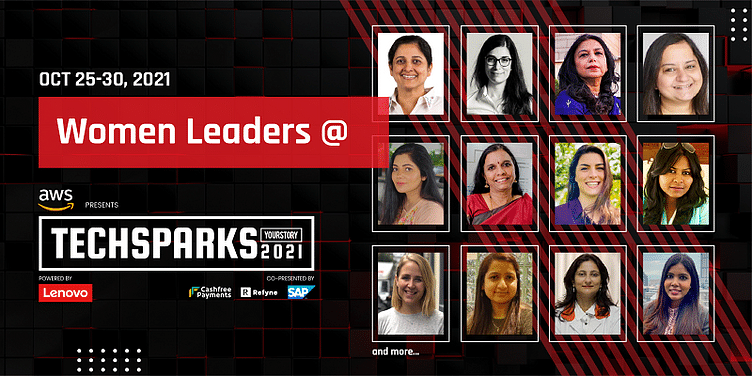 From technology, fintech, femtech to cybersecurity and more, women leaders from across sectors are all set to add rare insights, depth and perspectives at TechSparks 2021.

From conscious technologies to innovations, women are at the forefront across sectors.

And most recently, women have been at the centre of leading the fight against the social and economic consequences of the pandemic.  They have played an important role in the revival of the global economy, creating jobs, reimagining sustainability, and driving conversations around inclusion and equal opportunity.

All this while —  mostly single handedly —  looking after their households.

At TechSparks 2021, India’s largest virtual startup-tech conference, we’re spotlighting some of the most inspirational women leaders in the startup and investor ecosystem, as we delve into key areas they’re disrupting, the diversity and inclusion agenda that’s at the top of India Inc’s docket, and the new generation of women entrepreneurs they’re helping create.

In line with previous editions of TechSparks where the adoption of the gender lens was part of an internalised outlook, we have a spectacular lineup of women speakers discussing everything from fintech, healthtech and femtech, to leading iconic D2Cs and unicorn startups this year. Here’s a quick look at our guests this year:

CEO and Co-founder of ﻿JetSetGo﻿, Kanika Tekriwal, will talk to YourStory about her experience building India's first aircraft leasing company, the sustainable way.

While her parents desired her to get married after completing her education, Kanika had other plans for herself. Kanika was drawn to the world of aeroplanes as a child and dreamt of becoming a pilot. Later, when she joined the aviation industry at the age of 17, she gave wings to her dream - not by becoming a pilot herself but by making a debut in an industry close to her heart. While working in the sector in core operations management and business development, she sensed an opportunity in the overpriced and inaccessible charter plane market that eventually led her to launch her own venture JetSetGo in 2014.

Her experience in building an aviation company that, last month said it aims to make its flights carbon neutral by 2024, has taught her not only how to negotiate her way through an ecosystem that has traditionally worked against women entrepreneurs, but also why it’s important to shatter ceilings even if it comes at a personal cost.

Kanika was chosen as one of the 100 most inspirational women in the world by BBC and recognised by Forbes Asia as one of the ‘30 under 30’ leading entrepreneurs in Asia.

Sonam Choudhary’s panel on ‘Challenges in building edtech platforms for Gen C’, will draw on her own experience building ﻿GoSeeko﻿, an edtech platform that aims to make higher education accessible and convenient across Tier II-IV cities and towns of India.

Hailing from a family of doctors in Bihar, this Indian Institute of Management Ahmedabad-graduate had earlier founded a pro-adult immunisation platform GetMyVaccine.com, and worked as a Business Product Consultant at Houm Technology Singapore.

In an interview to HerStory, Sonam recalls two incidents that prompted her to start her first venture GetMyVaccine.com. While losing one of her close college friends to swine flu, a preventable disease, was one of the causes, she additionally wanted to address the knowledge and awareness among adult Indians when it comes to getting vaccinated, a topic which is perhaps again relevant for the present realities.

In a track built around ‘Tech and Digital Inclusion’, Roopa Kumar will spearhead discussions on emerging technological trends and innovations in the post-pandemic world, especially from a gendered lens.

An entrepreneur, strategic advisor and mentor, Roopa previously worked as Senior Partner at MTS Consulting and has more than a decade of experience in the industry. At TechSparks 2021, she will aim to chart out the digital inclusion roadmap, especially for women in technology, as well as delve into ways in which tech can solve the problems of a world that’s still reeling from the aftermath of a pandemic.

As CEO of the Indo-Canadian Business Chamber, Nadira has successfully created and delivered strategies to scale the India-Canada bilateral trade relations in the past years.

She started her career at the ITC Group of Hotels, where she handled its corporate affairs. She left ITC to start her own company, Lafance Overseas, in the sector of human resources and structural steel detailing followed by a stint that included managing corporate affairs for Mitchell Group (an Australian Based company) for India and Bangladesh.

At TechSparks, Nadira will throw more light on how Canada and India can build synergies to fuel global growth for the two nations’ startups.

A peek into key sectors and themes at TechSparks 2021, India's largest startup-tech conference

When Jaya Baloo is not speaking at influential conferences such as TEDx, RSA and TechSparks, she leads anti-virus company Avast as its chief information security officer.

At TechSparks, Jaya will talk about a topic pertinent in the internet age of today — ‘Rethinking the role of tech experts in the world of cybersecurity’, which is particularly poignant considering the last five years have seen several major cyberattacks and data leaks, including Equifax’s.

Before joining Avast, Jaya was with KPN, the largest telecommunications carrier in the Netherlands, where she held the position of CISO. An important thought leader in the cybersecurity space today, she has been formally recognised in the list of the ‘Top 100 CISOs’ globally and ranks among the top 100 security influencers worldwide.

In an edtech roundtable on ‘Discovering the next frontier in edtech’, Sudakshina Ghosh will aim to focus on emerging technologies and trends in the space, as well as what the future looks like.

Sudakshina has been with SAP India since 2006, and handled an array of portfolios in sales, including customer account management, customer relations, sales strategies and go-to-market strategies.

After completing her MBA in marketing and finance from XLRI Jamshedpur, Sudakshina joined Tata Consultancy Services as a software consultant. However, it is her “inter-departmental rotation” through a career spanning 15 years at SAP that Sudakshina credits for her career growth. She believes working across departments and a strong sense of brand engagement eventually prepared her for leadership roles. .

SAP Lab India recently made headlines for appointing Sindhu Gangadharan as its managing director — the first woman to head the German tech giant.

Varsha Tagare, Managing Director of Qualcomm Ventures, oversees a $150 million fund dedicated to investing in Indian startups and cross-border digital enterprises. A vehement advocate for diversity in the tech sector, Varsha plays an important role in the Indian VC ecosystem, especially when it comes to reshaping the future of entrepreneurship.

At TechSparks 2021, hear from her about the sort of innovation we need today, the way technology has impacted our lives in the last year, and what areas tech can make a bigger difference now, in the new normal.

Prior to joining Qualcomm Ventures, Varsha was an investment director at Intel Capital, responsible for global equity investments in mobile technology.

In the past, she has led and managed investments in Blue Canoe, JAMDAT(IPO), Jio, Lookout, MindTickle, Mobile365 (acquired by Sybase) and Zinier. She also holds two US patents in microprocessor design.

Co-founder and CEO of ﻿ZestMoney﻿, Lizzie Chapman is an influential personality in the digital lending space in India. A thought leader and a champion of diversity, Lizzie has regularly graced TechSparks’s stages to chart out the fintech landscape in India.

At TechSparks 2021, she will talk about how fintech startups can use regulations and compliance to scale and expand in the country, as well as shed some light on the opportunities and challenges that await the sector as threats from the pandemic recede.

A leading digital lending platform in India, ZestMoney is credited for introducing the concept of cardless EMIs aligned with the vision of making purchases more affordable in the country.

Lizzie moved to India in 2011, from the UK, to spearhead the India operations for digital lender Wonga.com. In 2013, she joined Development Bank of Singapore to help launch 'digibank’, a mobile-only virtual bank of India.

She started her career at Goldman Sachs in equity research and asset management, after which she joined The Wellcome Trust, one of the world’s largest endowments focused on financial services and Indian investments, as an investor.

Geetha Manjunath has pioneered a breakthrough artificial intelligence (AI) solution for detecting early stage breast cancer in a non-invasive radiation-free manner. CEO, CTO and founder of NIRAMAI Health Analytix, she will be talking about how healthcare can be merged with innovation to fuel rapid growth in the healthtech space.

Geetha holds a Doctor of Philosophy (PhD) from the Indian Institute of Science (IISc) and has studied management education from Kellogg School - Northwestern’s Chicago campus.

Before starting ﻿Niramai﻿, Geetha was a Lab Director for Data Analytics Research at Xerox India. In her career spanning a 25-year experience in the space of information technology (IT) innovation, she led multiple AI projects at Xerox Research and Hewlett Packard India.

At TechSparks 2021, Rachana will talk about the opportunities and challenges in the women’s healthcare sector, as well as how femtech startups can scale quickly.

At ﻿gynoveda﻿, which claims it is the world’s first femtech company that combines technology and Ayurveda to solve period problems, Rachana breaks barriers and taboos that exist, especially when it comes to women’s menstrual and reproductive health.

A self-described Ayurveda evangelist, Rachana is also the author of the book Happiness ki Khoj. She says her aim with Gynoveda is to empower women to be able to “self-diagnose, treat any health issues and lead an optimum life”.

Women leaders at the Indo-Dutch Panel

At the Indo-Dutch panel at TechSparks 2021, there’s a stellar line-up of women including Irish Schut — Advisor to startups and international talent, Netherlands Point of Entry — who will talk about why the Netherlands is Europe’s fastest growing startup ecosystem and Andreea Bota — Head for scouting startups, Yes!Delft — who will shed some light on the funding ecosystem and startup accelerator space in the country.

The aim of the Indo-Dutch track is to promote synergies between the Indian startup ecosystem and the Dutch ecosystem so they both can tap opportunities and resources, and become global powerhouses of innovation.

Catch these in-depth and invigorating conversations and much more only at TechSparks 2021 from October 25-30, 2021.