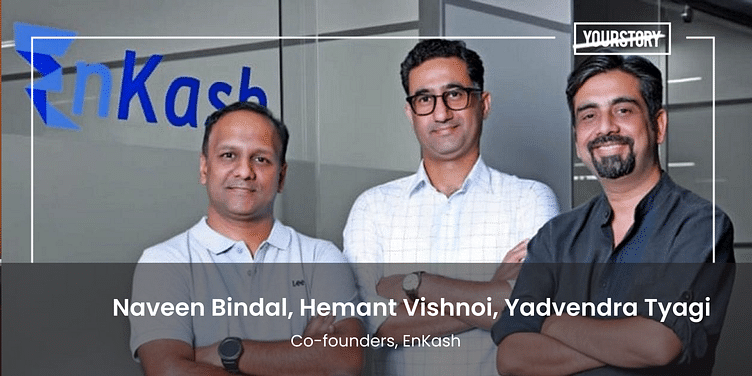 Founded in 2018 to simplify business spends, EnKash has shown strong growth in the last three years, thanks, in part, to COVID-19. With companies increasingly embarking upon their own digital transformation journeys, the startup expects to continue growing.

Businesses run on optimisation and depend on other businesses to help them become more efficient. So, when Yadvendra Tyagi, Hemant Vishnoi, and Naveen Bindal set out to solve the payments landscape for businesses, they based it around the ideology of making it easier, better, faster, and cost-effective for businesses to manage their finances.

Their fintech startup, ﻿Enkash﻿, brings together all the problems ventures and businesses face when it comes to managing their finances — bills, payments, loans, business credit and prepaid cards, purchase orders, and more — and uses a quaint, single, centralised platform to solve them.

Using EnKash’s singular platform, companies can issue their employees corporate credit or prepaid cards, set limits on them, keep track of invoices, predict cash flows, and even derive insights on their finances.

Yadvendra, Hemant, and Naveen founded EnKash in 2017 after working on the idea for almost a year when they were at Citrus Pay (later acquired by PayU). They noticed how even though there were a plethora of fintech options for consumers, there weren’t enough that solved the problems businesses faced, especially when it came to being able to manage corporate cards.

Over the last year, EnKash claims its revenue has grown more than 100 percent, year on year, with COVID-19 accelerating its growth, although the company did not wish to disclose its exact revenue numbers.

At the heart of the 10X user growth at EnKash — from 10,000 users in 2018, to 100,000+ now — was the rapid digitisation of SMEs and MSMEs that turned to online platforms to serve clients during the lockdowns last year.

EnKash said it grew 150 percent, month on month in the current financial year, and that revenue growth during this period is expected to be “more than 700 percent over the revenue generated in the last financial year”.

Its spending run rate is around $2.5 billion, and its revenue run rate, so far, has been around $30 million in the current financial year. EnKash says it has issued more than 200,000 cards in the market.

The startup’s push into the business spends space, where it has carved a niche for itself with its easy-to-use centralised platform, has also been an important driving factor for its growth since it was founded.

“Traditionally, corporate card spends were limited to travel and entertainment only. EnKash was the first company in India to move the entire payable spending to corporate cards,” Hemant tells YourStory.

“We progressively even solved for supplier payments for those vendors that were earlier unable to accept cards, after which we moved tax, utility, rental payments, etc. on cards, and now, we cover the entire spectrum of business spends via corporate cards,” he adds.

And not just that, with B2B e-procurement growing at an 80 percent CAGR, as well as expenditure on software, subscriptions, and digital marketing rising, a number of SMEs and MSMEs have been turning to light and affordable online platforms to help them manage and track their expenses.

EnKash says 70 to 80 percent of its customer acquisition, post-pandemic, is from organic demand, while close to 40 percent is from inbound demand or digital acquisition, without the startup having spent a single dollar on digital marketing.

Built for the ‘ineligible’: This fintech startup is providing digital credit cards to low-income individuals

“Our objectives were clear from day one that we need to have tightly controlled in-house corporate card programs to mitigate challenges around fragmented business spending. We have not only solved the pain points around how corporate cards are issued and managed but also brought in an intuitive spend management platform that takes care of spend controls as well as the expenses, payables and receivables,” says Hemant.

"People want to move to digitisation, especially post the pandemic, and a combination of our corporate cards and platform solves that without any cost to them," he adds.

With digitisation on the rise, EnKash hopes to continue showing growth in revenue. It said it expects loss to narrow and fall in the single-digit percentage range in the current financial year.

Hemant’s ultimate goal is to have one out of three corporate cards running with EnKash over the next five years, as well as cover both ends of the B2B and B2C offerings.

Initially bootstrapped with Rs 25 lakh, EnKash raised $3 million in its Series A from investors such as Mayfield India and Axilor Ventures. It is currently in the process of closing another round.

Its competitors include players such as Brex, ExpenseAnywhere, Centage, Divvy, Ramp, and Spendesk, among others.