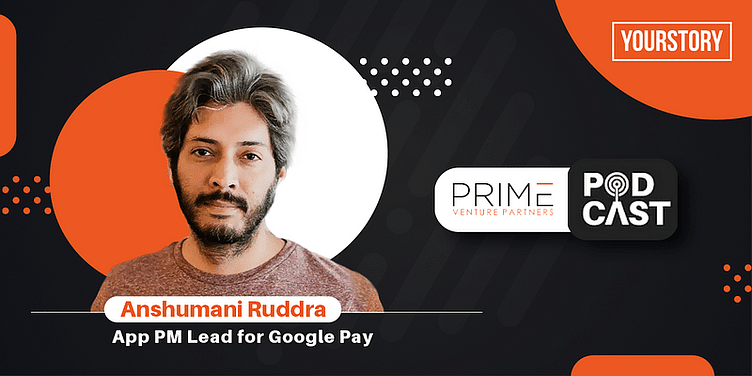 In a podcast with Amit Somani, Managing Partner, Prime Venture Partners, Google Group’s Anshumani Ruddra talks about how he shifted to Google, what he learned from his journey, and what it means to be a product manager.

Anshumani Ruddra, currently Group Product Manager at ﻿Google﻿, started out as a game designer at Zynga India in 2010.

“So, I was the first game designer at Zynga India. I was a part of the core team, which originally set around building out Zynga India, the first studio of Zynga outside the US. We did phenomenally well and grew incredibly fast. I spent a lot of time in the US working with PMs (product managers) and designers there. And I think the product design bug bit me then,” says Anshumani Ruddra in a podcast with Amit Somani, Managing Partner, Prime Venture Partners.

From Zynga to Google

He continued this journey by running his own games studio, Tiny Mogul Games, which eventually got acquired by Hike.

“It became a sister company to Hike. That’s when I reached a decision point thinking that, ‘Okay, I've spent enough time in games. Let me see if I can take the lessons from...’ And at this point, I'd never held the product manager title officially,” he adds.

Anshumani had been a game designer and then a general manager or a studio head. But his thesis is that a whole bunch of learnings from the world of game design and can be applied to what he calls the “Roti, Kapda, Makaan” products.

“These are regular, everyday use products which millions of people use. So, I realised that education and healthcare were diametrically opposite to entertainment. So I went to Practo to see if that would make sense,” Anshumani says.

He spent time at ﻿Practo﻿ running the central product – both on the consumer side as well as for doctors. Then Anshumani went to his first love – education.

And after that, he worked at Hotstar, which is now Disney + Hotstar. “I was there for a very long time, led the sports, social and gaming vertical at Hotstar and was responsible for streaming of IPL and world cup and a bunch of other things. So Hotstar is the home for cricket in India. So, I did a bunch of that.”

Now, it's been nine months since he has been working at Google. “Google is a generational company. Having spent so much time at startups, both early-stage, mid-stage and late-stage, Google Pay seemed like a startup within Google, which is how I ended up there,” he says.

Talking about the learnings throughout his journey, Anshumani added that, “I feel like a lot of product-building requires this cross-pollination. What it requires is breadth more than depth in a lot of areas. To become a product builder or a successful product manager, you have to be able to work with other people.”

“Similarly, you may work like a machine, but if you don't have the strategic depth or you don't have tactical depth, you will struggle. So I think that as PMs, having all these three abilities is great,” he elaborated.

Talking about user insight in the tech product world, Anshumani says that there is no shortcut, and the only way to do this is to go and talk to potential or existing users.

“Go figure out how usage happens. When you go figure out why only 20 percent women are your users, you‘ll realise that it’s because only 20 percent of them own their own phones, and mostly, they still use their brother's or their husband's phone during the day.”

How to become a product manager

Speaking on why people needed a PM, he adds, “PM is somebody who used to get things done and who would run around engineers and designers and get things done. Now, we are looking at PMs becoming founders. We are looking at founders recognising that they need good PMs pretty early in the life cycle of their product, even at a very early stage. PMs have an inordinate impact on the product and its growth.”

09:30 - Why you need both tactical and strategic depth

15:00 - How Indian users are ahead of Indian PMs and designers

24:00 - The golden age of product management