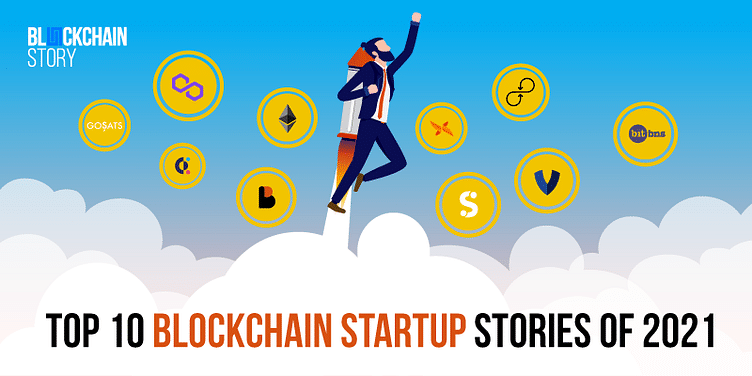 India saw a rapid rise in interest and innovation in blockchain in 2021 across builders, developers, and entrepreneurs. Here are 10 blockchain startups we covered leading the pack.

2021 has been a blockbuster year for the global blockchain and Web 3.0 ecosystem.

The market cap of crypto worldwide crossed $3 trillion for the first time, the value of assets locked in DeFi surged past $100 billion, and hundreds of NFTs sold for millions of dollars, and more.

Indian builders, developers, and entrepreneurs are now riding the blockchain, Web 3.0, and crypto wave, innovating for the future.

At YourStory, we have been bringing you stories of some of the most promising and innovative builders and projects in the space. Here are 10 startups we covered in 2021 that are leading innovation in this space.

In 2017, three software engineers decided to build a well-structured, easy-to-use platform for Ethereum scaling and infrastructure development — a solution that was forward-thinking and ahead of its time.

IIT Bombay alumni Neeraj Khandelwal and Sumit Gupta had started CoinDCX with the idea of bringing different decentralised marketplaces and cryptocurrencies onto a single platform. The duo focused on developing a product that allowed traders to swiftly trade cryptocurrency, with security and ease.

Now, as one of India’s leading crypto exchanges with over four million active users, CoinDCX is looking to carry forward the vision of making crypto accessible in India and accelerating its efforts towards bringing 50 million Indians into crypto.

With this, CoinSwitch Kuber became the second Indian crypto startup to enter the unicorn club after CoinDCX in August 2021.

The three friends were initially working at Amazon, Microsoft, and Zynga. But the allure of turning one of their hackathon experiments into a product set them on the path of entrepreneurship. Thus, CoinSwitch Kuber was launched.

Ledger and Trezor are two leading hardware wallet brands available on Etherbit. The startup has also started manufacturing merchandise (cryptocurrency-themed t-shirts, hoodies and mugs), as well as wallet accessories such as backup plates (that can be used to engrave one’s wallet password for safekeeping).

Although Harsh refuses to disclose Etherbit’s sales, he says there is traction from major cities as well as Tier II and III towns in India. He also claims some major names from India’s blockchain and crypto industry have purchased from the store.

Launched by Aniket Jindal, Ahmed Al-Balaghi, and Sachin Tomar in 2019, ﻿Biconomy﻿simplifies the development and UX of blockchain-based apps through gas-efficient meta-transactions. The startup has several project integrations under its belt and has relayed millions of blockchain transactions.

“Stripe simplified the game for payments. We want to do the same for transactions in blockchain, which include not only payments but also governance, smart contracts etc. The vision is to enable users to use DApps without even realising blockchain technology is being used in the backend,” Aniket says.

In 2021, siblings Mohammed Roshan and Roshni Aslam started ﻿GoSats﻿ amidst the crypto bull run and set out to build a simple Bitcoin on-ramp for the Indian masses shopping online. They then began integrating various online marketplaces and services on the GoSats app for users to access.

And after rolling out GoSats to the public in May 2021, Roshan and Roshni say they’ve landed over 17,000 users. With its early traction, GoSats has raised a total of $1.25 million from Fulgur Ventures, SBX Capital, Ajeet Khurana, Sathvik Vishwanath, STACKS, and Alphabit Fund.

﻿Covalent﻿ brings transparency and visibility to billions of data points on assets across blockchain networks.

The startup has worked with hundreds of Web 3.0 projects and indexed billions of rich blockchain transactions, including every transaction since genesis for several blockchains such as Ethereum, Binance Smart Chain, Polygon, Polkadot, Elrond, Near, and more.

“Although blockchain data is public, retrieving it in a reliable fashion is extremely difficult. Developers have to download terabytes of data and crunch the numbers just to answer simple user queries,” says Co-founder and CEO Ganesh Swami.

That's where Covalent comes in. The startup is solving this problem by allowing developers to integrate the startup’s unified API in blockchain products and allow users to easily view historical transactions and account balances, among others.

In 2018, Darshan Bathija and Sanju Kurian started ﻿Vauld﻿, which treats cryptocurrency as a separate asset class and brings core elements of banking to crypto users.

Besides storing their crypto, Vauld users can earn interest or borrow money based on their crypto holdings without having to liquidate it. They can also spend money through a credit card backed by their crypto assets, and also exchange their crypto for other tokens and fiat currencies.

Now, Vauld is licensing its various service verticals across countries. Although Indian users don’t form a significant portion of Vauld’s customers, the Indian market remains close to the founder’s hearts.

﻿Oropocket﻿ allows users to diversify their portfolios beyond traditional assets by investing in multiple digital assets such as digital gold and silver. It also provides customers with financial services on top of these investments, helping make the assets liquid.

The startup maintains reserves of gold and silver which are allocated to a user when they purchase it digitally. Ownership and future transactions are all recorded on the Ethereum, Tezos and Polygon blockchains.

It also has two other products — OpenDefi and UniFarm.

OpenDefi is a decentralised finance (DeFi) product which is a mix of real world and synthetic assets (tokenised derivatives), while UniFarm allows users to stake their crypto holdings, claiming earnings of up to 250 percent annual percentage yield (APY).

In 2017, Gaurav Dahake launched ﻿Bitbns﻿ in Bengaluru, but faced a challenging two years amidst the RBI ban on crypto. Believing that crypto cannot be stopped, he kept Bitbns running with a lean team.

Today, the exchange has 3.2 million users and a monthly trading volume of about $1.5 billion. Bitbns also has 300+ crypto tokens listed, which is more than any other Indian crypto exchange.

Due to the inherent volatility of crypto, Bitbns also launched one of the earliest Bitcoin SIPs, followed by an Ethereum SIP.

“Our goal was to build a platform to help users make money. If a platform achieved this, it would have the maximum stickiness. We figured out Bitcoin SIP returns were higher than other traditional forms of investment, and so we went ahead with it,” he says.