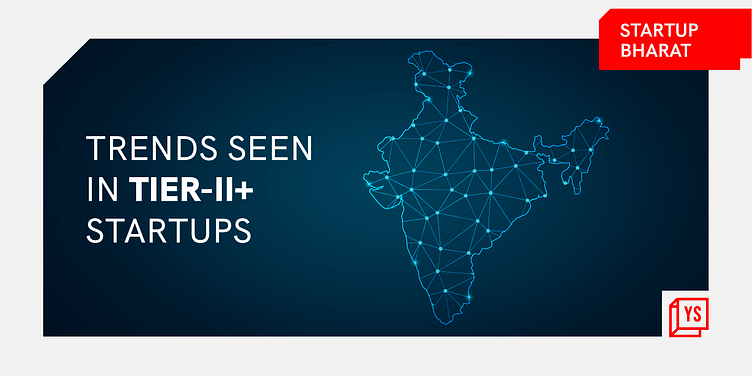 2021 was not just about startups entering unicorn clubs and making public forays, but also about innovative companies emerging from smaller towns.

The year 2021 was a remarkable one for Indian startups, with blockbuster IPOs (initial public offerings) like ﻿Zomato﻿, ﻿Nykaa﻿, and ﻿Paytm﻿, and an expanding unicorn club. While all of this grabbed media’s attention, another key trend that didn’t quite receive the spotlight that it should have was that of smaller towns becoming startup hubs.

The last few months have not only highlighted innovation coming from tier 2,3,4 towns of India but have also shown that states like  Rajasthan, Uttrakhand, Madhya Pradesh, Gujarat Kerala, Bihar, Jharkhand, and Odisha are becoming hotspots for entrepreneurship.

Some of the trends that stood out in 2021 are Bharat-based accelerators supporting startups from their home states. ﻿Marwari Catalysts﻿ (MCats), for example, which began as a Rajasthan-focussed angel investor group in 2019, has now emerged as a full-fledged accelerator for small-town startups in 2021. It formed a club of 100 co-founders from major cities like Surat, Ahmedabad, Nashik, Jaipur, Gurugram, Mumbai, Bengaluru, Pune, Hyderabad, Ranchi, Indore, and Mangalore with a vision of creating a community of ‘startup developers’ to help young entrepreneurs with the right mix of capital, know-how, and networks to build enduring businesses.

Speaking with YourStory, MCats Co-Founder Sushil Sharma says that there is a lot of activity going on in small towns in India around entrepreneurship, and accelerators are needed to push them into the mainstream.

Sushil says unicorns of today were also once struggling to grow.

“Every entrepreneur at the front of the line of life started at the back of the line. But with the right team, it's these set of co-founders that make the magic happen. The next wave of unicorns will come from small towns,” he adds.

Similarly, a new Bihar-based accelerator ﻿Karekeba Ventures﻿﻿﻿ (Kare-ke-ba: ‘We must do it’ in Bhojpuri) works on similar ethos to nurture, incubate, seed-fund, and accelerate early-stage startups in ‘Bharat’. The Patna-based accelerator, which started in late 2020, focusses on grass-root level startups that have scalable product and service ideas to create investment-ready and employment-generating enterprises.

Karekeba Ventures works as an enabler across three verticals — incubation, acceleration, and investment — to empower homegrown enterprises in smaller towns.

“We are trying to solve the twin problems of lack of entrepreneurial ecosystem, hand holding mechanism, and investment platforms in ‘Bharat’ for startups, and lack of impact investment opportunities on the part of the investors,” says 52-year-old Anubha, who moved from Delhi to Patna give back to her home state.

Over the years, startups from smaller towns have proven that they are no less than companies from metros. We have seen the growth of Gurugram-based ﻿CarDekho﻿, Chandigarh-based ﻿Jugnoo﻿, and Bhubaneswar-based ﻿﻿Milk Mantra﻿, among others

Investors have so far added companies from around 70 tier 2 cities to their portfolio.

Padmaja Ruparel, Co-founder of Indian Angel Network and Founding Partner, IAN Fund earlier says that tier 2 and 3 cities are fertile grounds for innovative solutions to emerge.  “The growing internet penetration has made it easier for building propositions and scaling ventures. With the pandemic and lockdown, remote working helped to access customers and talent from these cities, and create many more innovative startups - building from tier 2cities, for the tier 2 city problems/needs,” she adds.

According to YourStory Research, Jaipur is turning out to be the most preferred location among tier 2 cities for startup founders as well as investors. More than 40 funded startups have their headquarters in Jaipur currently. Other popular hubs where startups are headquartered are Chandigarh (14), Goa (12), Indore (20), Kochi (18), and Vadodara (11).

The rise of internet users in India as well as the COVID-19 pandemic has changed the dynamics for several sectors. The number of active Internet users in India is expected to increase by 45 percent in the next five years, and touch 900 million by 2025 from around 622 million in 2020, according to the IAMAI-Kantar ICUBE 2020 report.

This increase will be driven by higher adoption in rural India and tier 2 and 3 cities, which has clocked a 13 per cent growth to 299 million internet users over the past year, or 31 percent of India’s rural population.

Apart from entrepreneurs from smaller towns, startup ecosystem veterans such as ﻿Oyo﻿’s Founder and Chairman, Ritesh Agarwal have grabbed opportunities in tier 2 and 3 cities.

1/Small towns in India will write the next chapter of India’s startup story & I'm delighted to extend my support to this momentum, through an initial pledge of INR 1CR equity-free grant & mentorship to entrepreneurs across India-starting with 4 fantastic startups from @TheNaropa

In October this year, Ritesh pledged Rs 1 crore to support micro-entrepreneurs from small towns of India. He said that being from Rayagada in Odisha, he knows the unique privilege of being able to give back.

"These startups are poised to put their hometown on the map and  let the world experience their rich culture. I hope my contribution can support their journey," Ritesh said in a statement.

He also named the first four startups from Ladakh and the Himalayan region that will receive a part of this equity-free grant. These startups have been a part of the Naropa Fellowship programme. With the announcement of his support, he also said that small towns in India will write the next chapter of India’s startup story.

It is certain that small-town startups and entrepreneurs will chart the next stage of growth for India’s startup ecosystem across sectors, according to Gaurav Singhvi, Founder, ﻿We Founder Circle﻿.

“We see consumer (D2C) to dominate the small town ecosystem in 2021 but we are surprised to have noticed several enterprise application, agritech and SaaS companies emerging from these tier 2,3 markets,” he points out.

He says that the growth is due to the continued efforts of incubators, accelerators and early-stage investors that has helped startups with seed-stage capital and handholding. “We expect atleast 30 per cent of the overall startups coming from these towns” Gaurav adds.

“Startup revolution has gripped the nation and is not limited to just metros. The growth of such startups has burgeoned in the last few years coupled with the government’s initiatives and also the ability to work from anywhere on the back of strong Internet penetration and affordable data. We expect  this boom to continue for the next few years. We plan to double down our efforts in strengthening the startup ecosystem in smaller towns and expect to invest in at least 30 such startups next year,” he says.

In the last couple of years, startups coming from the hinterlands of India showed that they can solve pain points in several sectors from deep-tech to the last mile to agritech.

Ankur Mittal, Co-founder, Inflection Point Ventures says that IPV has invested in a few startups either based in tier 2 cities or those focused on customers/vendors or sales-staff operating out of these cities. Some of these startups are ﻿Buyofuel﻿, ﻿Edvizo﻿, ﻿Hesa﻿, ﻿iKure﻿ and ﻿Bolo Indya﻿.

“It has added to business economics as well. Plus these cities represent a large percentage of new demand or opportunities. In terms of future trends, we believe sectors such as healthtech, edtech, and esports will continue to show growth and Fintech will continue to be relevant. B2B SaaS has gained relevance and we can see more growth in this space in 2022,” he adds.