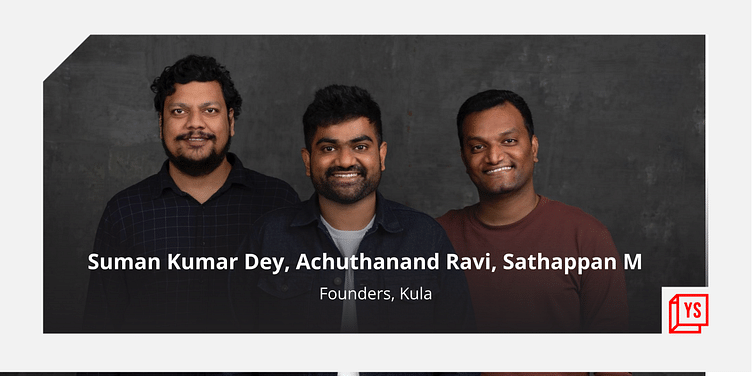 YourStory presents the latest funding activities in the Indian startup ecosystem and beyond. Here's the roundup for Thursday, January 20, 2022.

﻿Kula﻿, a SaaS venture building a recruiter tool for fast-growing companies to build talent pipelines, has raised $2.7 million in its maiden round of funding.

The investors include Venture Highway, Together Fund, and Global Founders Capital.

Kula's founders are Achuthanand Ravi who was previously part of Stripe's leadership recruitment team, Sathappan M, engineer number 3 at Freshworks, and later an engineering leader at Grab, and Suman Kumar Dey, an early member of the infra team at Freshworks and Grab, and Architect at Salesforce.

The Kula platform will help aggregate candidate sources, and automate the candidate outreach and engagement. Recruiters can then reach out to the best-fit talent through automated nudges via multiple channels and touchpoints, according to a Kula press release.

Madbow Ventures raises $2 million in Series A round

﻿Madbow﻿ Ventures, founded by Naveen Mahlawat in August 2016, has raised $2 million in its Series A round.

Madbow, a fashion and lifestyle brand, is present in footwear, western wear, and ethnic categories. "The funds raised will be used for the company's expansion, as we plan to launch fashion brands and labels in kids, ethnic, high fashion, cosmetics, and general merchandising, as well as bring all the fashion and lifestyle requirements under one roof," said Naveen, CEO of Madbow Ventures.

Settlrs raises $1 million from Canbank Venture Capital, and others

Incubated at NSRCEL in the Indian Institute of Management, Bangalore, Settlrs was founded by Gaurav Ranebennur and Nishanth Janadri.

So far, the platform has rented more than 35,000 assets, such as furniture, home appliances, fitness equipment, and IT infrastructure, across more than 50 businesses in 15 cities.

Settlrs plans to expand in other cities and build a fintech platform to help vendors deploy assets in the rental ecosystem, according to a Settlrs press release.

“Our solution offers businesses a chance to reduce their capital expenditure and choose flexibility of using new products,'' said Gaurav Ranebennur, Co-founder of Settlrs. The platform will also provide opportunities for investing in asset-backed products that offers good returns, according to a press release from the venture.

The current investment enables a flexible loan structure and unique repayment schedule with a moratorium, allowing the startup to accelerate expansion and meet rising demand before the next capital round via equity, stated a press release from Caspian Debt.

Last year Proklean debuted in the B2C space with a range of house cleaning products. It has also invested in automation and scaling up of its production facilities by three times, and its R&D capabilities, according to the press release.

﻿Zymrat﻿, a performance and athleisure brand founded by Ujjawal Asthana and Ankita A, has raised $500,000 in a seed round.

Zymrat makes products, such as training and running t-shirts, shorts, joggers and outerwear for men. It is reportedly witnessing five times higher demand for its products.

"A repeat rate of 40 percent has been our biggest product market validator that we are moving in the right direction. We are gearing up to launch 30 new SKUs across categories in the next few months," said Ujjawal in a press release from Zymrat.

The company had previously raised $250,000 in December 2020 from Dominor Investment as lead, LetsVenture Angel Fund, and other prominent angel investors.

Khelgully bags $416,000 in seed round led by Titan Capital

﻿Khelgully Gaming﻿, an eSports real money games platform, has raised Rs 3.1 crore (more than $416,000) in a seed round led by Titan Capital.

Founded by Prakul Bansal, Rajat Goyal, and Dheeraj Kumar in 2021, Khelgully organises online tournaments for popular games like Call of Duty, Freefire, Clash Royale, and Fantasy Cricket, and has received over 2 lakh registrations on the platform in the past four months.

Quizy raises $270,000 in seed round led by We Founder Circle

Quizy is run by Nostaga Technologies, which was founded in 2021 by Amit Kumar and Sachin Yadav. The company had previously raised a pre-seed round by 100X VC from its class 4 cohort.

"We make meaningful value of people’s device time by incentivising their efforts where they learn about trending topics and news in the form of quizzes because this is the age of content and information," said Amit Kumar, Co-founder of Quizy.

FeetWings raises $147,000 in maiden funding round

﻿FeetWings﻿, which is developing 'smart socks' that can monitor blood glucose levels in diabetics, has raised Rs 1.1 crore ($147,800) in its maiden funding round.

FeetWings, founded by Dr Siddhant Bhargawa, Animesh Kumar and Hrithik Jaiswal, has worked on a smart healthcare assistant that monitors a patient's vitals, such as foot temperature and blood glucose non-invasively through its IoT-based smart socks, according to a press release.

"We envision creating a diabetic ecosystem where a doctor can seamlessly monitor and help their patient through our socks, so that a much more personalised care can be provided to every patient," said Dr Siddhant, in a press release. "The money raised will help us in refining the product and to make it consumer ready."