Focusing on building one thing at a time is crucial, says Shiprocket’s Saahil Goel 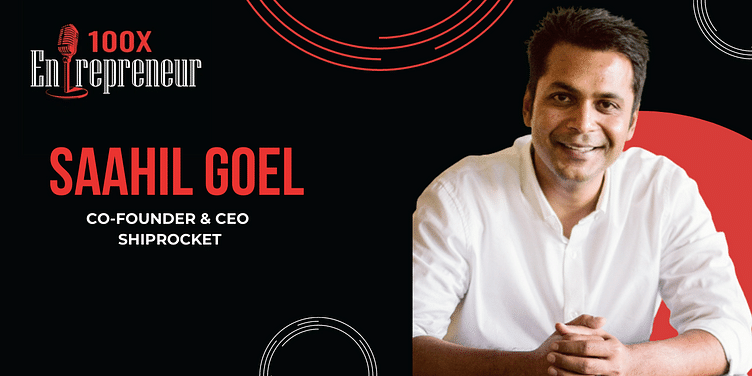 In this week’s 100X Entrepreneur Podcast, Saahil Goel, CEO and Co-founder of logistics startup Shiprocket, shares his 10-year journey of building the startup, and reveals how they try to stay relevant.

Backed by the likes of Zomato , Temasek Holdings﻿, Lightrock﻿. Moore Strategic Ventures, 9Unicorns, InfoEdge Ventures and March Capital, Shiprocket began with one aim: to create a seamless platform that connects retailers, carriers, and consumers across national and international locations.

Today, Shiprocket has a network of over 17 courier partners and enables delivery across 29,000 pin codes in India and 220 countries.

However, this fast-growing Delhi startup was not built overnight. It took nearly 10 years to navigate the various sets of problems in the ecommerce domain and create a niche.

Shiprocket, which started operations in 2017, began life as Kartrocket in 2012 to democratise commerce digitisation for the growing number of small businesses. The second version was a more holistic platform, Kraftly, which then transitioned to Shiprocket.

In a conversation with Siddhartha Ahluwalia, Founder and Host of 100x Entrepreneur﻿, Saahil Goel, CEO and Co-founder of Shiprocket, explains his company's journey, finding the market fit, and their current focus.

Going into the market

According to Saahil, staying focused on building the enterprise was crucial during the initial years.

“We started realising that, sometimes, as founders, we want to go after a really large market size. We should, but the problem with that is that the larger the market size, at the given time, the more people are going to be there.”

“If we built a B2C marketplace in 2015-16, it would have been a really hard journey to sustain that with so many big folks around. So we started understanding that we needed to find something that merchants really ask for, as opposed to us having to push it to them,” Saahil says.

This, he says, gave them clarity into realising what they had built was actually valuable. The idea was that if a series of things didn't work, they would try and benchmark the product-market fit metrics with other people across the world.

“We could see that we were far below what some of the great companies were doing. That was a data point that would tell us what was going on. We would rather do one thing, but do it really, really well. So that we built real value, as opposed to spreading ourselves too thin,” Saahil says.

Shiprocket turned net profitable in March of 2019. However, Saahil says that a lot of Shiprocket’s newer initiatives are not revenue generating as yet.

“But, it’s a pretty small number because the business model doesn’t necessarily require a lot of cash burn. It may require capital for a few things, but it’s not really a burn-intensive business,” he says.

“And then from there, we’re now sitting on 75,000 merchants. So it’s been growing between three and four folds. But when we crossed our first million shipments a month mark, it was not very far back, it was only two years ago, or two and a half years ago. Today, we are processing in excess of seven million shipments a month. So, it has grown pretty rapidly as a platform,” Saahil says.

He says Shiprocket has had to reinvent every few months, to hyperscale and stay relevant.

“You have to get better at being able to design 12 months ahead. We had never had to deal with that problem earlier. In the last six to 12 months, I’ve been focused on planning ahead in terms of what’s going to be needed, as we keep scaling the platform and the company overall.”

01:56 – Finding his co-founder and brainstorming around data-driven logistics

09:04 – Problem with starting in a large competitive market

12:02 – Focus metrics during the initial journey

45:01 – ‘Unless and until you have clarity about something, it won’t work’