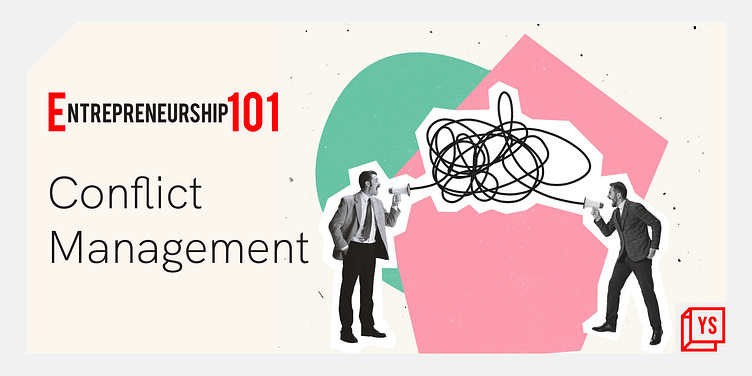 Entrepreneurship 101 is a series that focuses on the ‘human’ aspects of being an entrepreneur. Through this series, YourStory shares ideas, suggestions, references, and examples that will help you reflect and tread the entrepreneurial path smoothly.

Many believe that startups are all about the products and services, and operations and revenue models. However, the very soul of a startup lies in its people. When the going gets tough, it is the employees’ enthusiasm, creativity, energy, and innovation that keep the business running.

And the more people your startup has, the more varied their opinions will be. Unfortunately, when too many people have too many strong opinions, it can lead to conflict. While conflicts are considered undesirable, they often lead to breakthrough ideas.

“A good manager doesn’t try to eliminate conflict; he tries to keep it from wasting the energies of his people. If you’re the boss and your people fight you openly when they think that you are wrong– that’s healthy.”

With so many suggestions and inputs from people with different backgrounds and experiences, clashes are bound to happen. For this article on Entrepreneurship 101, a series that focuses on the human aspects of being an entrepreneur, YourStory discusses ‘conflict management’.

We spoke to startup founders to understand how they manage conflicts in their respective organisations. Here’s what they said.

“Many times, conflicts are due to non-aligned priorities or objectives of groups or individuals,” says Nilesh Gudhe, Founder of B2B SaaS startup ﻿Bynry﻿.

The first step towards approaching an issue arising from a difference in opinion should be listening to all the parties involved. More often than not, listening, assessing, and then personalising the solution with respect to everyone’s well-being solves the issue. If a conflict cannot be managed by just communicating transparently, one may then escalate the matter for a more solution-based approach.

“When there are one-on-one conflicts that happen between employees, we take into consideration how even single-party conflicts can affect the company’s ecosystem and move on to approaching it with the individual focus instead of having one-key-to-all problems,” says Shashank Trivedi, Co-founder and CTO of school management startup ﻿Campus 365﻿.

To this, Nilesh agrees and suggests that the end goal should always be to ensure that the decision made is aligned with the startup’s strategy.

Founders should be able to differentiate the actual issue from the individuals involved, thereby not making it personal. Usually, conflicts take place when one mixes these two things up.

Additionally, avoid the blame game. People make mistakes and entrepreneurs should be open to the idea of motivating their employees to learn from these mistakes and move on. To add to this, Shashank believes that founders must remain positive and use affirmative language with employees — to make them feel concerned. However, issues of integrity need to be addressed.

“While we have an open culture, even after giving repeated chances, if it doesn’t get rectified, we need to take remedial action. We do not allow any issue to be kept simmering, we solve it or take necessary steps and move on,” says Padmakumar Nair, CEO and Co-founder of Ennoventure Technologies.

Conflicts form great case studies for the future. Entrepreneurs should document present conflicts and allow past experiences to direct and help form the correct approach in the future.

For Nitish Rai, Founder and CEO of logistics startup ﻿FreightFox﻿, the best way to do this is by taking efforts to analyse the root causes of conflicts and avert such problems in the future. He says Freightfox monitors and measures the organisation’s overall mood, motivation, and energy through “One-on-one and skip-level meetings that help us stay on top of any situation we might foresee.”

Founders cannot be busy all day, solving petty issues and addressing conflicts in their team. Doing this becomes more challenging as an organisation starts adding more employees. Therefore, it is essential that at least during the initial days of a company, an entrepreneur focuses on scanning through the best human resources (HR) professionals available and hiring those whose thoughts align with the company’s ethos.

Campus 365’s policy is to contain all public disagreements to prevent the effects from bleeding into groups, leading to bigger arguments. Shashank says that the HR team intervenes in public disagreements and helps employees find a common ground to resolve conflict without escalation.

Employees form the backbone of all organisations. While hiring managers, it is crucial to look for candidates with leadership skills. These are the people your team will look up to for motivation, inspiration, and solutions in times of crisis. While technical experience and functional competencies are essential criteria behind hiring an employee, entrepreneurs should also look out for people managers.

For entrepreneurs, it is very important to keep no space or scope for partiality or favouritism on the team. The minute one tries to give extra levy to one employee over another, they are letting bias and negativity into the workplace.

Therefore, it is essential to avoid personal bias from seeping into your office. People involved in the conflict should be able to share their version of stories and entrepreneurs, as listeners, should be able to provide an unbiased opinion.

Noam Wasserman, the author of The Founder's Dilemmas, states that around 65 percent of startups fail due to conflict between founders. While it is almost inevitable, healthy tensions and discussions push core teams to realise the company’s mission. However, catastrophic behaviour may lead to the untimed death of a startup.

When building the primary product, or even rolling out new features, co-founders may have differences in opinion or misaligned visions. Despite the differences, the founding team or the core team must remember:

Startup founders start their entrepreneurial journey with one common mission in their minds. Individuals are bound to have contrasting opinions but in spite of that, they should always remember their common goal and remain committed to that idea– the big picture that brought them together.

“We have differing views about many things, but we listen and believe in each other. Even if we disagree, we ensure we work towards the common goal, skirting our differences,” says Nitish.

Communication is the key

You can arrive at a solution only when you have an open, unbiased, and practical discussion. Additionally, an entrepreneur must remain mindful of the language they use during these conversations. The language, even in the heat of the moment, must be positive and encouraging for future dialogues.

At FreightFox, the founders conduct no-work-talk meetings to understand and bond deeper, allowing team members to empathise with each other and make better decisions.

When there is more than one founder, or even with the core team, the roles and responsibilities of each person should be defined transparently. For this, before hiring an employee, or bringing in a co-founder, entrepreneurs should carefully craft the role and clearly state what one is expected to bring to the table.

YourStory asked startup founders if they have any specific mechanism in place to prevent or address conflicts within their employees. Here’s what they had to say:

Campus 365 is testing out a model where they will have mentors and peers acting like guides in situations of conflict.

Peers will be the first line of contact — they’ll be the first ones to be approached in case of any conflict. Essentially, peers are the experienced members of the group, the ones who have worked with the company for a while. Having a better understanding of the organisation will allow them to guide others on the necessary steps to be taken, with the company’s methodologies in mind.

Then comes the mentors. They are the seniors (like assistant managers) and will give the necessary guidance, whenever required. This system is aimed at creating a friendly hierarchy on conflict management. If this system isn't enough for an employee, they may approach HR and other seniors.

Entrepreneurship 101: How to deal with rejections?

The management is always accessible. I regularly go out for coffee with my employees and their managers to discuss issues.

We have proper top-down across team communication, the objectives are set correctly with no conflicting priorities. Still, if we foresee any approaching conflicts, we do handle things transparently. We communicate with the employees around this and set the expectations.

With my experience of working with a larger organisation, I have witnessed that when the team grows, various conflicts surface that are generally handled by HR or a group leader. So, these are the people who are usually involved. And again, similar processes are followed, where the facts are collected, the conflict is understood in a much better way and the decisions are made with the organisation's value in mind.

Cultural fit, inclusiveness, and team dynamics are fundamental in our hiring process. Besides that, we make sure enough discussion and communication are happening within the organisation. We have regular all-team meetings, where everyone can talk about any challenge that they come across.

Additionally, we have regular all-hands and encourage everyone to set up one-on-one meetings. Employees' physical and mental health tops our priority chart. After all, a happy and fit team moves faster and farther.

To read the previous articles on Entrepreneurship 101, click here.