Women have an intuitive relationship with money; they just need to reclaim it: Salt co-founders 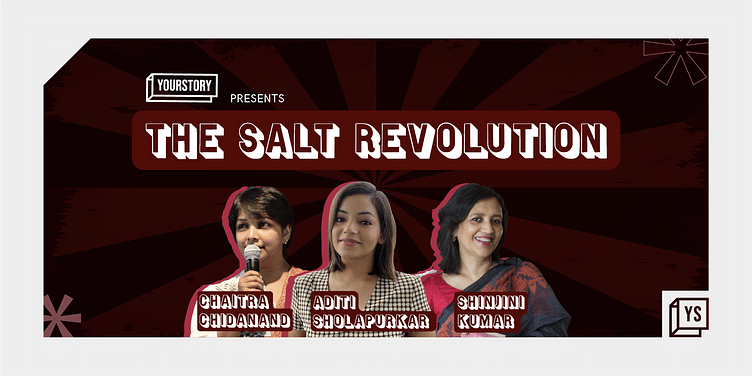 Financial planning and investment app Salt has been on a mission to get women to reclaim what they’ve always had - an inherent acumen for money. More women making more financial decisions - it’s as simple as that, but how does one get there?

Shinjini Kumar, Chaitra Chidanand, and Aditi Sholapurkar, who have all had successful and rewarding stints in financial institutions, came together in early 2021 with a mission to help women make better money and investment choices, and in the process, really listen to the customer and tap into their money psyche.

And their first step was to build a money personality quiz.

In an exclusive and fun conversation with YourStory’s Founder and CEO, Shradha Sharma, the trio talk about what spurred the decision to leave cushy jobs and embark on an adventure together, their plans for Salt and of course, the concept behind the moniker.

According to Shinjini, that women have an intuitive relationship with money is well-known.

Chaitra points out that in the earlier days, the ‘tijori ki chaabi’, or keys to the locker, was always with the woman of the household, but with time, assets have moved from physical forms of grain, gold or cash in the house to banks and more abstract forms.

“The movement of the assets out of the household has really led to the distance between women and money,” says Chaitra.

That is why, the three founders believe it’s more about reclaiming as opposed to “empowering” women, and adapting to the new world of how money decisions are made today.

The way women’s relationship with money is intuitive, essential, and also invisible, made complete sense, so the name ‘Salt’ just presented itself, says Shinjini.

“It was almost like we were discussing these concepts and salt represents all these three things,” informs Shinjini.

Elaborating on Salt’s flagship money personality test, the founders’ say the idea was always to listen.

“Before you can even reach the point of money actions, you need to tap into a person's money psyche, their money feelings, their money habits and then you can possibly influence actions,” Aditi says.

Chaitra recalls how those early conversations with many women across the spectrum to understand their financial constraints and needs were meant to shape their first product. Interestingly, these sessions turned out to be an eye opener of sorts when the women in turn, thanked them for their professional time and expertise.

“We discovered the reason they were thanking us was because this was the first time they were actually thinking and talking about money,” says Chaitra.

What are the learnings so far?

For Chaitra, who had earlier co-founded Buy Now Pay Later (BNPL) fintech startup ﻿Simpl﻿in 2014, one of the biggest insights as a second-time entrepreneur was that armchair innovation is not enough.

Before setting up Salt, the co-founders conducted several Proof of Concepts (POCs) with small groups of women, and have continued to do iterations thereafter. Even now, there are strict guidelines around what Salt employees can and cannot do while collecting feedback.

“Design thinking science is really what we are applying here, and we think that will help enable us to create a product that will sell itself in the end,” says Chaitra.

Aditi, who has worked with Bank of America, Citi, Paytm Payments Bank and Goldman Sachs adds, “We started in the reverse order, and our number one employee was a data scientist.” She is alluding to the fact that a lot of times entrepreneurs tend to build a product first, and then look at data as an afterthought.

How to make partnerships work?

When asked about the dynamics between the three women founders and making that partnership work, the easy retort and laughter that follows gives away the energy between the trio.

According to Chaitra, this beautiful partnership is a huge function of who they are as individuals and their value systems.

“Because you end up spending so much time together, the value system resonance is very critical,” says Chaitra.

She also underlines the need for developing the habit of having difficult and uncomfortable conversations with each other.

“If you don't do that on day zero or minus one, it never happens,” she says. “I have seen so many entrepreneurs defer that part to later, and it only gets worse, it creates a dynamic that's not sustainable, and then you're leaving it to chance.”

Despite knowing each other so well, the three co-founders consciously spent three full months of 2020 just talking to each other. “While we were exploring the problem space, we were also exploring the partnership space,” says Chaitra.

They also took a diligent approach to writing things down.

“We didn't leave it to just conversations that we are having because when you're forced to write things down, you’re forced to think a lot more deeply and clearly about it,” Chaitra adds.

While Shinjini appreciated those long conversations, she says she also had a lot to learn from Chaitra's earlier experiences. “Because she was the entrepreneur among us, and Aditi and I were from professional backgrounds where things get resolved in a very different way,” says Shinjini. “We do have a way to be able to say things to each other without messing it up for each other.”

Their relationship with money

With three women founders on board a financial platform, it is inevitable that we ask them about their own relationship with money. And the answers were revealing.

“The way I thought about money turned it into a toxic relationship, to a point where it was the last thing I wanted to think about. That’s why I had absolutely no relationship with my own money,” says Aditi.

Shinjini, who has had an 18-year-long stint with the Reserve Bank of India (RBI), believes there is no such thing as competence involved in managing your money; it's about understanding your life, your priorities, your systems, and just going ahead and making the right money decisions.

“For me time, money, and relations are all wealth, so I must always have all these three things in my mind before I take any decision. I always feel the best things in life are free, so you have to learn how to enjoy your life with that,” says Shinjini.

Given her engineering background, Chaitra says she was always comfortable with technical theory, but studying and nearly failing in accounting during her business studies at Stanford saw her develop a deep phobia for industrial finance. “That phobia was so deep that I did not make a single conscious investment till 2013.”

Chaitra's single conscious investment was $2,000 in Tesla, which she sold for a ‘fantastic return’ six years later in 2019.