Walk into a pitch meeting convinced your story is worth telling, says smallcase CEO and co-founder 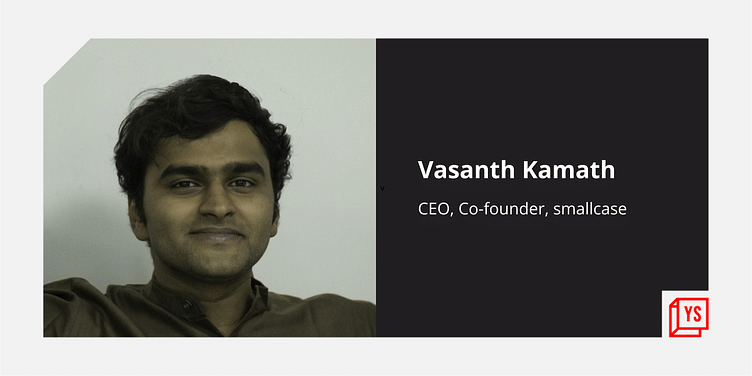 Vasanth Kamath knows a thing or two about telling a story of the future, and then selling investors on it. From walking into a pitch room with frayed nerves, to remembering what's important - here's a quick lesson in fundraising from this maverick entrepreneur.

﻿Smallcase﻿ CEO and Co-founder Vasanth Kamath recalls a time when walking into pitch meetings with investors was nothing short of daunting.

Founders often live in the future and tell a future story, he says, and it can be hard to sell someone the future when they haven't seen it with their own eyes.

But the one thing that always helped Vasanth hold his own during those initial pitch meetings was telling the right story and having a bucketful of conviction in it.

Pitching is, at the end of the day, selling a story to people who would believe in the plausibility of the story, he says - and as long as you're convinced the story you're telling is the right one, there's nothing stopping one from taking the world by a storm.

Chalk it up to the motions of pitching again and again in the initial days to investors, or even self-discovery as one builds out the business, pitching - and the fundraising activity, in general - does get easier over time, especially if one keeps their end-goal in sight.

"For smallcase, we always started from the point of saying that we want to build a better product for retail investors..and that has always been our pitch even in our last fundraise," Vasanth tells YourStory.

The difference between the first pitch and the second though is the execution and its proof - and that makes it easier to walk into pitch meetings, at least somewhat.

"When you're doing the first pitch, you're asking people to believe in an idea..and that YOU are the people that can execute this idea. It's much tougher for people to take that leap of faith, initially at least."

But telling the right story, having a goalpost in mind, working off of a basic plan and then not forgetting that focal point helps, he adds.

Smallcase, which Vasanth built as a first-time entrepreneur along with Anugrah Shrivastava, and Rohan Gupta, his co-founders, was founded ahead of its time, even though some might say it hit the market right at the inflexion point when digital finance was taking off in the wake of demonetisation. The team focussed on building the business and platform its first couple of years, and then, after smoothing all of its rough edges out, launched publicly in a big way.

But pitching smallcase - a platform that essentially allows users to invest in "themes" or model stock portfolios created by registered and certified investment professionals - to investors and brokers alike was hard in the early days because no one in the market believed a product like theirs was necessary.

For Vasanth, who has raised nearly $62 million from investors including the likes of Amazon, Sequoia, Blume Ventures, Faering Capital, Premji Invest, Kunal Shah, Tanmay Bhat, WEH Ventures, and others, walking into a pitch meeting is definitely an easier feat now - and it keeps getting easier as the company grows, he says, in way of offering some sort of assurance to budding entrepreneurs who've finished raising a round or two.