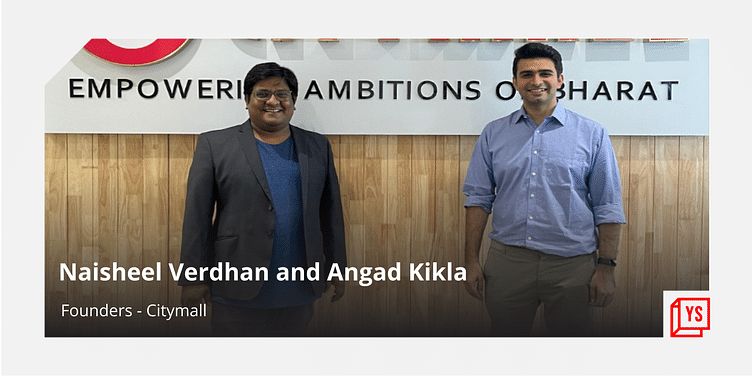 CityMall will use this funding round to expand its reach in Tier-II and beyond locations, and get more users onto its ecommerce platform.

﻿CityMall﻿, the Gurugram-based social commerce startup that aims to upgrade consumers residing in Tier-II and beyond locations onto online shopping, has raised $75 million in Series C round of funding led by Norwest Venture Partners.

This is the largest funding round raised by CityMall which was founded in 2019 by Angad Kikla and Naisheel Verdhan, and it has cumulatively raised $110 million till now. This Series C round of funding also saw participation from General Catalyst, Citius, Jungle Ventures, Arena Ventures, Elevation, Accel, and Waterbridge.

“This funding is a validation of our business model where we pioneered community group buying in the country,” said Angad in an interaction with YourStory.

This funding round has valued this startup upwards of $310 million.

CityMall will now look to go deeper into the India market to those consumers who reside outside of the large metros and are generally referred to as the Bharat market. This startup has built its business through a network of community leaders who serve both as marketing and logistics partners and are able to earn extra income.

Angad highlighted the key differences between the metro and non-metro ecommerce markets in India, where the fundamental one being the low penetration of online shopping. Non-metro ecommerce also observes low-ticket size of purchases, which averages around Rs 300-350 as the household incomes are also lower.

The co-founder of CityMall said the biggest challenge is to build the supply chain for such low-ticket size ecommerce purchase items, and it has partially solved through its community leader aggregator model.

CityMall will use this latest round of funding to build its own supply chain networks for the smaller towns in India and grow the community leader network. Besides, it will also invest into its product and technology teams.

Angad said, “These consumers are deep offline buyers who value price before choice or conveniences and this would require some handholding to move them into ecommerce shopping.”

Citymall is now looking to expand its presence from the present 25 towns to over 60 locations in the next 12-15 months, which will mean expansion from three states to around seven. This would see it growing the community leader network by 5x and user base by 10x.

According to this startup, it has grown over 30 percent month-on-month in the last 18 months, with 30,000 community leaders. The majority of the purchases through this are essential items which are non-discretionary in nature, and Angad noted that 70 percent of the product sold are the local brands.

Angad said, “To get Bharat users onto ecommerce as a habit forming exercise will be through products that have high frequency of purchase.”

On the funding into CityMall, Niren Shah, MD and Head of India, Norwest Venture Partners said, “We have been impressed by the strong product-market fit and hypergrowth that Citymall has demonstrated over the last few months. Citymall is a pioneer in the Community Group Buying (CGB) model in India and has been able to serve lower value orders through a network of Community Leaders (CLs) solving for efficient customer acquisition and lower supply chain costs.”