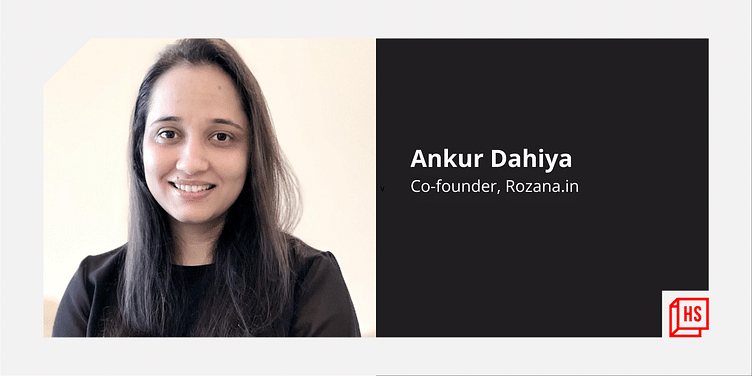 Ankur Dahiya is the co-founder of Rozana.in, a peer commerce platform that aims to connect rural population of the country to online rural commerce through a network of micro entrepreneurs.

Ankur Dahiya likens her early life to that of the storyline of Bollywood film, Dangal. She worked hard to become a taekwondo player, starting her journey from Rohtak, Haryana.

“I represented India at the U19 world tournament and won medals for the country,” she recalls. Unfortunately, her rise ended when her bout with different issues began.

“I suffered from some health problems. That, and being part of a conservative Haryanvi community who had issues with me playing sport with boys made sure my journey in the game was cut short,” she tells HerStory.

Ankur may have given up the sport due to family pressure, but it taught her an important thing – how to fight and succeed in life.

She completed her engineering degree and pursued a PhD in AI and Data Science from IIM Lucknow.

In 2017, she met Adwait Vikram Singh, who was then working with the CMs office. She had earlier met him in Uttar Pradesh while working with 1090 Powerline. The duo teamed up to start Routier, a B2B trucking app for corporate customers.

The company worked with Coke, Pepsi, Reliance, Somany Tiles, Mother Dairy, and many other renowned customers. During the pandemic, Routier was acquired by a US-based NASDAQ listed company.

After taking the exit from Routier, Ankur and Adwait started Rozana along with Mukesh Christopher and Prithvi Pal Singh.

﻿Rozana.in﻿ is a peer commerce platform that aims to connect the rural population of the country to online rural commerce through a network of micro entrepreneurs.

Creating a network of micro-entrepreneurs

Explaining the pain point, Ankur says, “When we saw the supply chain crippled further, we understood the possibility and need for not only setting up the supply chain, but also creating entrepreneurship in the villages itself. Many of us in the city were able to order online, but in the villages, people had phones, but no grocery or other essential product could reach them. Whichever areas did cater to a few villages close to urban centres; the products being offered were very different from what was being consumed in the villages.”

The founders chose to begin from Delhi/NCR and Lucknow. Since Rozana had a rural push, Lucknow was the natural choice as the central point of the most populous state in the country.

NCR included the adjoining rural areas of Gurugram, Jhajjar, Rohtak, Sonepat, and others.

“We assembled a team, which would work on identifying rural entrepreneurs who would be comfortable with technology. Through the Rozana portal, the entrepreneur would order and we started supplying to them. The entrepreneurs became our enablers, and we created a tech enabled ecosystem for them to order and supply FMCG products,” she says.

“The entrepreneur has four major roles in Rozana. First is to ‘onboard the customer’. Every peer (micro-entrepreneur) has a unique code. Once a peer gets a customer to onboard, they apply their unique peer code. Second is to promote ‘engagement’ - The peer partner forwards innovative schemes, offers, and other plans to the customers.

Third is to make ‘delivery’ in the village once a customer places an order. Rozana delivers the product to the house of the peer partner. The peer partner then delivers it to the customer. For doing this, the peer makes money as a channel partner of Rozana in the village. Fourth is to give or pass on local inputs, the entrepreneur gives us input for local produce.”

The founders realised that the biggest problem in rural and semi urban India is limited product offering.

Rozana offers a wider range of SKUs for villagers. There is limited supply of products in the villages, not because there is no demand, but because the local retailer does not have the working capital to open a large store. Hence, people have to travel to local towns to buy products.

From a sales exec to an entrepreneur, how Ayushi Mishra made it big in the event planning space

The Rozana app offers them a larger product offering, better pricing, and access to new companies looking to scale in rural India.

Currently, Rozana services essential categories like edible oil, spices, staples, personal care, cosmetics, and many others. It will soon be diversifying into many new categories like footwear, spectacles, apparel, etc.

The platform is being used for essentials currently, but Ankur believes there is opportunity for a multi-category portfolio, which will be sold via the network of Rozana.in micro-entrepreneurs.

“Rozana is a D2C company for 90 percent of Indians who have never used online commerce.

We are expanding village to village, town to town, and hamlet to hamlet. We work relentlessly to create and bring tens if not hundreds of millions of customers to online commerce through our peer commerce model. Currently, no D2C company understands the local needs of different parts of the country. The brands, products, and lifestyle changes drastically with state to state. Western UP and Eastern UP have very different consumption patterns,” Ankur says.

The effects are manifold. The platform is diversifying a village ecosystem and creating a different category of consumers of products who have never used online commerce before. For FMCG companies, it offers access to a consumer base, which was practically non-existent for them, and vice-versa for consumers.

It also aims to empower women entrepreneurs in the village through technology to not only onboard customers and supply, but change consumption patterns as well.

“Out of the approximately 600,000 gram panchayats in India, which is at the core of the rural market, the local demand is catered through the shopkeeper in the village, which has the capacity to store a few SKUs due to limited working capital and storing space thus giving only a limited options to the consumers. So, in effect, we see the local retailer as our competitor,” Ankur explains.

Last year, Rozana raised $1.5 million from a German fund IEG – Investment Bank. It’s on the verge of closing another round, which will be announced soon.

The founders’ plans include expanding Rozana into many more districts and areas, create more women entrepreneurs and in turn livelihoods through its social commerce platform.