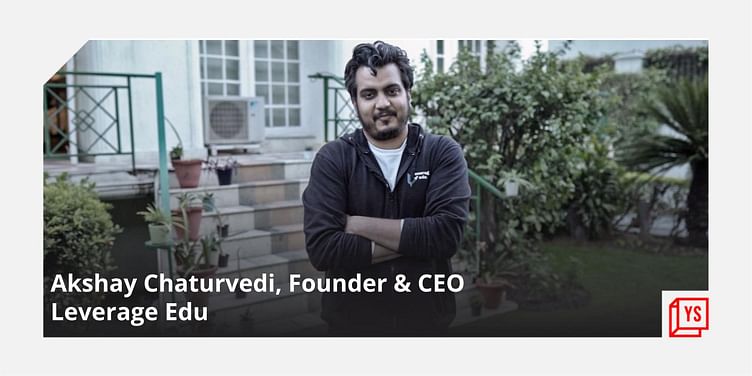 Started in April 2017 by Akshay Chaturvedi, LeverageEdu’s core business helps universities in the developed world, bring onboard students from the emerging world.

Global study abroad platform ﻿Leverage Edu﻿ announced that it has raised $22 million in its Series B round of financing.

The financing round values the company at ~$120 million, according to the press statement.

“We have grown over 12x in revenue between February‘21 and ‘22, and are at a $20 million annualised revenue crossed milestone now. The team has done this while cutting CAC (customer acquisition costs) by crazy two-thirds, thanks to over 20 percent of our business now coming from referrals, another 35 percent from a bunch of slick product channels like virtual fair platform UniConnect, IELTS-prep product Leverage Live, the uber-popular AI Course Finder, and a growing double-digit from our organic traffic which is now the largest in the world for the category at 30 million last year and an expected 100+ million this year.”

Started in April 2017 by Akshay Chaturvedi, LeverageEdu’s core business helps universities in the developed world, bring onboard students from the emerging world. They do that with a suite of products built for the University ecosystem. For students, LeverageEdu has built an outcome-focused technology-led counselling platform, that gives them access to a one-stop dashboard for their entire study abroad journey. It also launched the “Study Abroad with LeverageEdu'' app last month, which has over 50,000 downloads already.

Leverage had announced an office in the UK in September last year, and also announced an Australia office last week — both of which are B2B setups that build products for and serve universities. It sends students from India and Nigeria, as its core markets, and plans to launch other markets post this fundraise.

Akshay added, “The market is massive, but needs to be dealt with a lot more caution on all sides. Students have their careers at stake, and at the same time, universities are very particular about the quality of students they bring. It’s important to balance this out, and play full stack on both sides. We have hence built a powerful loved brand and community on the student side, and at the same time, are the only player to have won the trust of 400+ universities in such a short timeframe, the largest university-relationships pool among any company from this decade.”

Speaking on its investment, Kaizen Private Equity’s Gaurav Jain said, “We have been looking at various companies in the Overseas Student Mobility space and are happy to have partnered with LeverageEdu, a company with the right product positioning, traction and stage to work together with on the growth journey. LeverageEdu checks the boxes of our education framework of access (opportunities for students to study abroad), quality (complete student services and university matching) and relevance (multi-country and cultural awareness)”.

Aditi Kothari, Vice Chairperson of DSP Mutual Fund, said, “I invest in entrepreneurs: their integrity, positive and abundant energy and ability to have an open mind and adapt. I saw this in Akshay in addition to of course the vast opportunity in the area in which he is playing and is a sizeable player. I am excited to help as we build this out to market domination.”

Anirudh Damani, Managing Partner at Artha Ventures, said, “The end to end financing piece of LeverageEdu, which I believe is still in pilot, is a game-changer. While solving a massive problem for students and parents, the financial services are in itself a multi-billion dollar opportunity for LeverageEdu & the initial traction has been beyond our wildest expectations!”