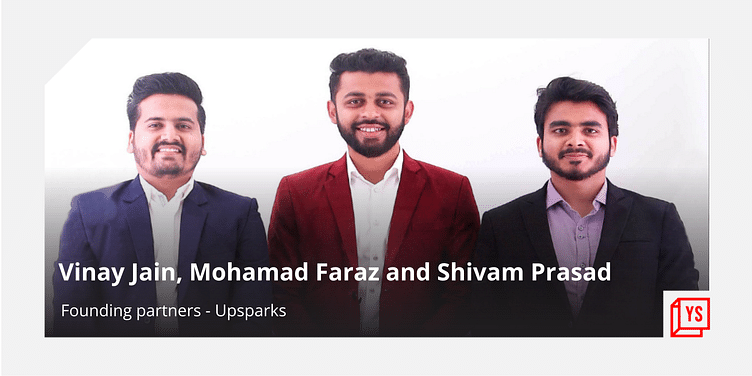 After running a very successful bootstrapped tech venture - Solutions Infini - for nearly a decade, friends turned fellow-entrepreneurs Mohamad Faraz, Vinay Jain and Shivam Prasad decided it was time to give back to the Indian startup ecosystem as venture capitalists. Their motto was simple - founders always come first.

They started micro venture capital firm ﻿Upsparks﻿, with a firm belief that they have much to offer startup founders, given their experience founding and then successfully exiting a tech venture at a time when the venture ecosystem was not as well-developed as it is today.

Solutions Infini was founded in 2009 and operated in the communications technology space. The startup, which the founders claim was profitable from the first year of operations, later merged with a European firm and was renamed as Kaleyra. It is now a NYSE-listed company.

“There was limited access to capital or mentorship during those days of starting up, but what kept us going was our innovation and frugality in operations,” says Faraz.

After exiting from Kaleyra in 2020, Faraz, Vinay and Shivam toyed with the idea of launching another startup, but decided to take the VC route as they felt that they had much to contribute.

As a Micro VC fund, Upsparks invests in the pre-seed stage of a startup. Considered the foundational period, the right intervention and funding during this period makes a huge difference to entrepreneurs.

“There was a lot of inbound interest from startup founders who sought our guidance on various challenges they were facing as a business,” says Faraz.

The early stage of a startup is all about taking those important decisions which sets the benchmark for the later years. These include hiring the right people in key positions, deciding execution abilities, working out go to market strategies, and engaging with user communities, among many other things.

Faraz remarks that first time founders generally get carried away when they receive their initial round of funding, and utilisation of capital in the right channels becomes a challenge.

“We advise founders to invest capital in milestones that are tied to their next fund raise,” says Vinay.

Been there, done that

Given their first-hand experience in running a startup, the three founders also act as a strong sounding board to new entrepreneurs.

“One advice we give our founders is to start building a team culture very early, and hire the right kind of talent which will align with the organisation,” says Faraz.

It also helps that three bring their own respective strengths to the table. In their previous firm, Faraz was leading strategy while Vinay managed technology, customer success and financial modelling. Shivam was largely into business development, growth and product initiatives.

“We go into the details with every founder in whichever areas he/she needs help with,” says Faraz.

He feels the one common mistake most founders make is not giving enough importance to the legal aspects of a business. “This is very necessary, as it sets the boundaries in terms of investor right, esops, etc,” says Faraz.

“Lot of founders look for stop gap arrangements by working with freelancers, whereas they actually need to engage with a good legal firm.”

The second lacunae is in having a strong data room, where privacy of information is given the highest priority, he adds.

Pre-seed investing is often said to be a whole different ball game compared to other venture capital milestones, as a startup’s future path is still largely unknown at this stage. Nevertheless, Faraz believes it is here that real relationships are built, as it is better to get in early with the caveat “risks are high, but the rewards are equally higher.”

The former entrepreneurs believe the key attribute is agility, as there is always limited bandwidth during the early period. It is important that startups use its resources in the most judicious manner at this stage, they say.

“The moat for any early-stage startup is the founder itself, and he/she needs to channelise their energy in the right areas,” says Faraz.

He adds that as a VC firm, Upsparks is very particular about expectation setting right from the beginning, and lets approaching entrepreneurs know early on if their idea is worth its salt.

The Micro VC fund has made around 54 investments till date, which also includes a few investments by the founders as angel investors prior to starting the firm. Key focus areas include SaaS, Fintech, Web3, B2B commerce and Deeptech.

Upsparks also has a more broad-based approach to investing where it investigates sectors like consumer internet or electric vehicles to learn more about these segments.

“We would like to invest in sectors where we can add value,” says Faraz. “When we get into a call with a startup, ideally, we would like to give an answer as to whether we are going to invest or not, as the thesis is always - founders first.”

Upsparks typically invests around $200,000 in early-stage startups, and does about four to five deals a month. Around 15-20 of their portfolio companies have gone on to raise their next round of funding, claims Faraz.

A key highlight of their portfolio has been its investment into Pixis, a California-based tech startup that provides codeless AI infrastructure. It recently raised $100 million led by Softbank Vision Fund 2.

Upsparks plans to remain invested in its startups for five to seven years, then look at exits based on market conditions as well as other incoming investors.

The firm is looking to touch 100 deals by the end of this year. The founders claim they have got requests from entrepreneurs to lead pre-seed rounds instead of being a co-investor.

In his parting shot, Faraz says, “If there is one thing we have learnt as founders, it is that even without any pedigree or business background, anything is possible if you can just dream big enough.”