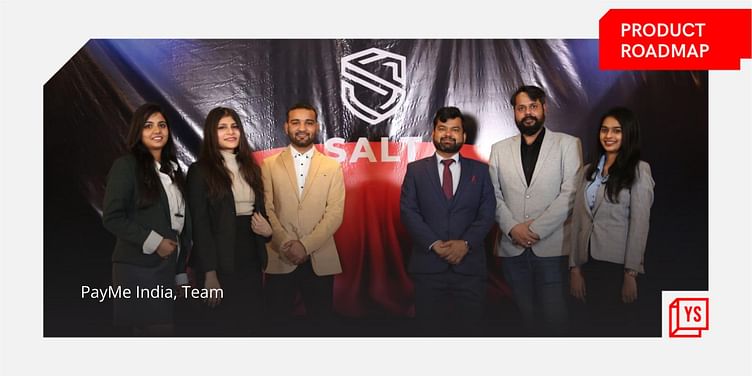 Delhi-NCR based fintech startup PayMe India is a full-stack digital lender in the personal loan space. It aims to eliminate the difficulty of getting financial assistance by leveraging modern technologies.

Hailing from a small town in Uttar Pradesh, Mahesh Shukla always believed that larger cities and towns would provide easy access to credit. However, to his dismay, the process was both cumbersome and expensive.

While availing of a loan became difficult for him, someone who had worked in the banking sector for some of the leading brands like the Bank of America, DB, and Barclays, Mahesh could only imagine the plight of common people.

“At the Corporate Banking Division at Barclays, I came across new fintech companies. These companies were trying to eliminate the need to physically go to the bank. But their efforts were confined only to payments, as they were unable to break into the lending space, even though they had all the tools to do a better job in lending than banks. Paytm had just exploded here in India. But it was also confined to payments at the time,” says Mahesh.

After delving deep into the space, he started ﻿PayMe India﻿ in 2016. The fintech startup is a full-stack digital lender in the personal loan space. It aims to eliminate the difficulty of getting financial assistance by leveraging modern technologies.

PayMe India began with small ticket size advance salary loans. After venturing into ‘pay-later’ and affordable line of credit for MSMEs, it has now evolved into a full-fledged personal loan company with its own NBFC licence.

PayMe India provides instant credit solutions to both self-employed and salaried employees from Rs 500 to Rs 2 lakh as per their requirements.

“Our lending model empowers loan seekers to borrow easy, fast, safe, and affordable personal loans. The documentation process involved is very minimal, and the entire process -- starting from application to disbursement doesn't take more than a day. After the loan approval, the cash is instantly transferred to the bank account of the user,” says Mahesh.

Starting with the loan segment, the company has evolved to introduce several other products like investing in digital gold, investing in a mutual fund, paying rent online with a credit card, generating CIBIL reports for free, and others.

In February this year, PayMe India launched a new product called “SALT Buy Now Pay Later”. With this, users will be able to make purchases anytime, anywhere, and pay for it later.

The first product was a basic application with all the needed specialisations for user convenience. The app was easy to utilise with simple UX/UI. The user could easily and quickly apply for a loan and check their loan status on the app.

However, Mahesh realised that developing a prototype is time-consuming, and they needed to have a minimum viable product (MVP). It took almost eight months to develop the first app, and his involvement as a product guy was too much since he was the one who imagined the product.

“However, soon after launching, we had to go for many iterations to make the user journey easy,” says Mahesh.

The first app worked well for the initial six months. However, the team received a lot of feedback and suggestions from customers, who were demanding and wanted quick documentation and onboarding. With changing infra and the availability of new features, we decided to rework our app's UX and UI.

“We gave our product a completely new look and made it more user-friendly. Earlier, the loan disbursal would take 24 hours, but now, with the help of new technology, the disbursal is facilitated in under 30 minutes,” says Mahesh.

After the number of users crossed 50,000 in a couple of months, the core team felt they needed a dedicated team for managing the app. Once the infrastructure started hitting budget restrictions, they realised the product could not scale vertically anymore. So, the team began to look at technologies that could help reduce infrastructure costs along with better availability.

They also focussed on understanding user behaviour by speaking to all their customers. The team tried to figure out how to make the app more user-friendly and convenient. They even offered a mandatory feedback column for all users and started rewarding them with cashback and other relevant benefits.

"This feedback from end-users helped us plan our new releases and functions,” says Mahesh.

When PayMe India finally launched its product, it was a comparatively new concept in the market, and it was a little difficult for Indian customers to understand how a loan app works. The user was aware of the loan aggregator; however, they had no experience of complete processing and approval over application instantly.

Initially, the customers felt there could be some catch. “We took this situation as a challenge, and we took some initial effort to convince and make our initial customers comfortable and understand the process. We also went to some reliable websites and asked them to list our product there, which worked like a miracle and brought our initial 5,000 customers. We also took a lot of security certifications to make our customers comfortable dealing with a legitimate app,” says Mahesh.

However, managing product development and scale is a challenge in itself. Despite that, PayMe now has a substantial regulatory part looked after. The team did this in a well-planned and phased manner to manage any last moment rush and reduce any inconvenience.

“With little syncing and prioritising, we have been continuously adding features in our app, which are appropriate for our customers. The main challenge was to keep uptime and response under control and to see that users were not getting impacted at any point in time. Another challenge was supporting the development and avoiding monkey patching at all costs."

"We had to ensure we kept bugs to a minimum, even if it resulted in extended timelines. We also moved from legacy monolith architecture to microservices architecture to cope with scale and availability,” adds Mahesh.

The ecosystem is changing rapidly, and so is the expectation from the customer's side. Automation is also driving growth and making it easy in the process. Mahesh explains the team has reduced most of the manual work with automation. Hyper-automation with the help of AI/ML, deep learning, and RPA are bringing lots of efficiency around decision making and work automation.

“We moved from manual disbursals to automated disbursals and reduced the time by about 90 percent. We also integrated eMandates/eNach/UPI to simplify repayments. From manual KYC, we took advantage of eKYC and shortened the customer journey further. CI/CD helped us streamline our release process at the infrastructure level. Crashlytics and performance benchmarks helped improve the app experience for users and identify issues early on. These key technologies and trends are becoming increasingly intertwined and integrated, giving massive impetus to fintech and financial industry innovation,” explains Mahesh.

PayMe India recently launched 'SALT,' a virtual credit card, offering credit over UPI. The new app will help the user base utilise the available credit limit for their day-to-day transactions and even small transactions imbibing the proper credit habit. The customers can track their monthly expenses and their category from the statements. They can also earn loyalty points that can be clubbed and redeemed for exciting items.

“We are nimble-footed and closely monitoring all technological development in the sector. We hope there is a new future waiting for us where in Defi, account aggregation, and digital assets will change a lot of things,” says Mahesh.