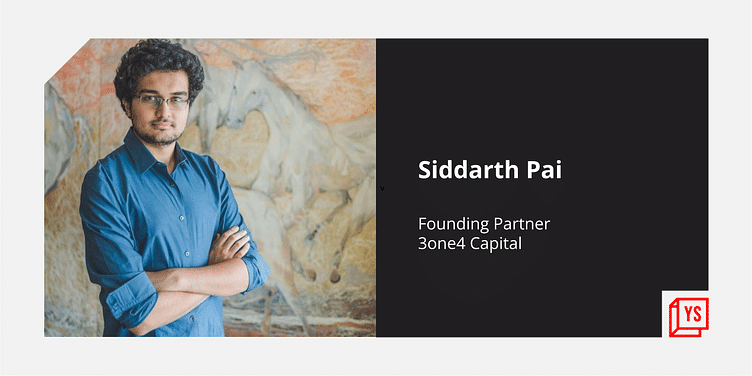 The global economic environment remains uncertain due to the Russia-Ukraine crisis, and Indian startups, similar to the time during the pandemic, will have to be conservative on capital spending to ride through this rough period.

The Ukraine-Russia crisis has put the global economy into a turmoil, leading the investor community to wait-and-watch before they start investing again.

In an interview with YourStory, Siddarth Pai, Founding Partner, ﻿3one4 Capital﻿, says, the current situation will have a bearing on Indian startups given the inflow of overseas capital, with the next three months being very crucial as to which direction the markets will take.

Despite this environment, he feels the country will see another 30-40 new unicorns emerging. He says,

“When the market bounces back there is going to be large amount of capital that will be chasing smaller number of deals, especially those startups that have proved to be resilient, and this will lead to a rise in valuation.”

YourStory (YS): How will the Russia-Ukraine crisis impact capital flow?

Siddarth Pai (SP): There are two important global cues that will affect this entire calendar year. One is how the Ukraine-Russia crisis will unfold -- not in terms of the war, but in terms of how the energy landscape is going to change globally.

A large amount of money that is flowing in the world right now is exiting tech and getting into commodities and energy, because scarcity in these two segments has affected every country across the globe. So, a large amount of the public capital is actually going to chase this where the supply is scarce. This is the first global trend.

The second one is, during the Covid pandemic, central banks across the world pumped in $25 trillion, while the global GDP shrank by $3 trillion, and there is a large amount of liquidity. Added to this, there is disruption in the supply of goods like semiconductor chips, leading to scarcity.

Central banks across the world have historically low interest rates and will now have to increase their rates, and when they do, all stocks will start getting repriced. Until the reset and reprice happens, investors do not want to take the risk of investing a large amount of money because they want a sense of stability to emerge and then take it forward.

So, the next three months is going to be very crucial - April to June is going to be a hard quarter for everyone for these reasons. Until a resolution comes in and clarity emerges, the markets will continue to remain frothy.

YS: What kind of impact will these developments have on the Indian startup ecosystem?

SP: The ability of startups to raise capital will be impacted very differently. Those startups that would take three years to raise zero to hundred million dollars, will now be able raise this capital in just 18 months, as every investor wants to invest in early-stage companies.

However, the journey from $100 million to $700 million is going to be difficult. Four years ago, it was called the Series A chasm, where seed rounds were easy, but then onwards it was tough. Now, it is Series B chasm. This is going to be extremely hard because the metrics that investors look at this stage is substantially different from what were used in the early stages.

Certain segments among the startups will be sunrise sectors like Web3, crypto, and new-age fintech infrastructure products will have investor interest, but for others, there are headwinds. For the investors, the conversation right now is that they are going to wait at least for a quarter before they start investing.

YS: Does this mean that startups need to be conservative on their capital?

SP: Very much. Just because a startup has raised two or three rounds of funding in quick succession does not mean that it will be the same going forward as there are changes in the investor profile, quantum of money, and most importantly, the metrics they look at.

Given the sea of change that is happening right now, the moment a startup is low on cash and trying to raise funds, investors sense a weakness where they start becoming cautious.

Today, we also have funds that are raising a large amount of capital and have a 10-12 year time period to fully deploy this money and do not mind taking one or two quarters off just to see how the market is changing. They have the luxury of time, which the startups do not have. So, startups will have to follow the practices they deployed during the peak of Covid pandemic like cutting down expenses, running a lean organisation, being targeted in their capital raise. Please remember frothiness is anathema of capital.

YS: Will this have bearing on the emergence of new startup unicorns?

SP: Despite the next quarter being fairly uncertain, the country is likely to see the emergence of another 35-40 unicorns this year. When the market actually comes back with companies that have weathered this storm, there is going to be a large amount of capital that will be chasing smaller number of deals, which will lead to a rise in valuation. This is because these are the startups that have survived the Covid and other uncertainties. This shows that these companies are resilient and can survive any kind of external shocks. The new sunrise sectors will see the largest number of unicorns being created.

YS: What is your view on the quality of founders today?

Number one, most of the founders are actually repeat founders who have helped grow businesses. They have seen the entire grind and their awareness now is much higher. So, when they go to raise capital, they do a targeted raise, given that capital is abundant right now, but getting the right kind of investor who will help build and support the business itself will actually become very important.

These kinds of founders are approaching the funds themselves, where they are looking at four to five targeted rounds to build a large business.

The intention of all the founders is no longer to sell their business but to go for an IPO, and this is the marked change. They are building for the long term.

YS: Will startups actively look at the IPO route?

SP: The public markets are still rewarding these new-age companies. The only thing that the market is interested in is a very clear value proposition. They want to know where exactly you stand, what is your core business, and how it is generating cash with the road to profitability. Outside of this, they would be tolerant of any another expeditions you would want to make in any other field. The moment your core business starts quivering, the public markets will start punishing very heavily. We have seen this in the case of Facebook.

So as long as you follow these two elements, the public markets will actually reward you.