My mantra was to ensure people don’t go through same kind of mess I did, says Shivakumar Ganesan of Exotel 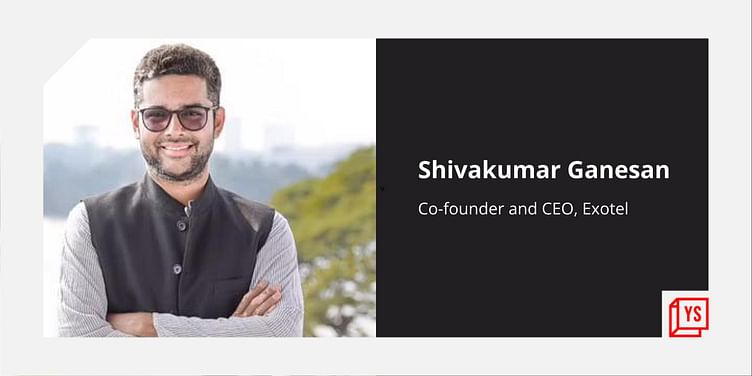 In this week’s 100X Entrepreneur Podcast, Shivakumar Ganesan, Co-founder and CEO of Exotel, a cloud customer engagement platform, takes us through his journey of starting the SaaS company.

Shivakumar Ganesan, popularly known as Shivku, is the Co-founder and CEO of ﻿Exotel﻿. He has been serving companies with customer communications through his company. Today, the Bengaluru-based SaaS company has over 6,000 business clients in India and South-East Asia, including Flipkart, Ola, Swiggy, and Zerodha.

No matter the size, scale, or industry within which the company exists, Exotel has a product-solution for all of them.

But Exotel wasn't Shivakumar’s first startup idea. In a conversation with Siddhartha Ahluwalia, Founder and Host of 100x Entrepreneur podcast﻿, Shivakumar delves into his journey of building the company, about his experience with VCs and angel investors, and more.

Shivakumar, who was working with Yahoo, quit his job in 2010 to recreate a C2C marketplace, a bazaar where people can buy and sell things amongst each other, something similar to the new-age classifieds business.

“In those days, smartphones were not there. It was still the iPod genre, and voice and SMS were the only ways to connect with people. I created a voice SMS internet interplay where individuals can buy and sell things amongst each other. So that was actually the seed of Exotel in 2012,” says Shivakumar.

Setting up the company

Coming from an engineering background, Shivakumar was not into the communication or telecom field.

“It was my endeavor in trying to scratch my own itch that ended up with the company. I’m actually the first customer, and that also explains the Exotel question, because I knew very well the problems faced by business owners and entrepreneurs trying to put together a communication system because I actually attempted to do that myself. I was quite unsuccessful in doing that,” he adds.

So, when he pivoted, it became his mantra to ensure people don’t go through the same kind of mess he went through when he tried to put together a communicating system.

Initially, his idea was to put together a communication system -- a phone number to which hundreds of people can call in, and the system would connect them to other folks, buyers, or sellers. These people can then have conversations to do business transactions.

“This was like a many to many remote bazaar. It is all happening on one phone number. There was search involved as well. People could send an SMS to a number, and then they can get back an SMS in response in which there’ll be a phone number, through which they can talk. So this was actually the original problem statement. There was already a company that was doing that in the US called Twilio,” says Shivakumar.

He wanted to try his hand in making something similar in India. He thus spoke to telecom companies, bought some hardware, installed some open source software, hooked up a bunch of cell phones through Bluetooth and hacked them to receive and send SMS from a database. He then had a laptop connected to a server with two or three cell phones, wrote multiple codes, and then somehow got something up running and working.

In a world of AI and chatbots, why bootstrapped Exotel believes conversations will always thrive

According to Shivakumar, since it was the beginning of tech startups, most of them did not have any intention of trying to figure out the communication piece because they had their own problems to solve.

Hence, Exotel was able to attract many customers. From zero customers, it went to acquire about 20-30 customers in a matter of a few months.

“Subsequently, it increased my self confidence and we found the product-market-fit. In those days, it wasn’t a thing to start up yet. Angel networks like Blume was perhaps one of the early institutional investors, and they were actually quite impressed with what we had done. Many of those guys were actually interested in investing,” Shivakumar says.

To know more, listen to the entire podcast here.

37:30 – Dealing with thoughts about quitting

49:38 – Current capabilities and scope for growth

52:15 – Proving naysayers wrong by building a $60 million ARR SaaS from India for India