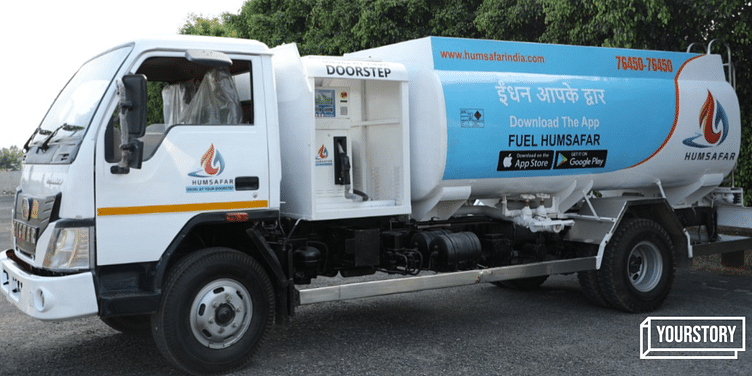 With doorstep delivery services for everything from groceries to clothes becoming the preferred choice for consumers over the last couple of years, ﻿Humsafar﻿, a fuel delivery startup has seen demand rise exponentially — so much so, that Mayank Agarwal, its co-founder, doesn’t really feel any substantial change in his day-to-day work schedule now versus the height of the pandemic when lockdowns were happening.

New Delhi-based Humsafar took shape after Mayank, who had spent much of his childhood at his father’s fuel retail outlets, wanted to start his own business, but with an added layer of innovation on top of a legacy business.

The inspiration for a startup that delivers fuel came when he noticed how auto rickshaws would come in with empty barrels and get diesel.

"It struck me that the process was extremely laborious, time-consuming and especially risk-prone," he tells YourStory in an interview.

Diesel is a very flammable liquid, just like petrol, and carrying it haphazardly, in containers not meant to transport it has proven to be fatal in the past. So Mayank came up with the idea of providing doorstep diesel delivery services using regulated equipment to safely transport the fuel to anyone who needed it.

Among the first things the startup did was procure Petroleum and Explosives Safety Organization (PESO)-compliant bowsers — basically, trucks that have a built-in mini petrol/diesel pump-like system to dispense the fuel. These trucks are able to safely transport diesel around and can carry thousands of litres of fuel.

Next, Humsafar developed a proprietary mobile app to make it easier for its customers to place orders for doorstep deliveries.

Mayank says the startup’s main customers include heavy diesel users and industries such as mining, infrastructure, hospitality, cineplexes, housing societies, and the agricultural sector. It also supplies fuel in jerry cans to residential complexes or individuals for use in generators.

Fuel demand amid the pandemic

Predictably, Humsafar saw an immense spike in demand for fuel delivery during the pandemic and over the lockdown periods, compared especially to the previous year’s quarters.

In 2021, there was a dip in sales of fuel due to the second wave of COVID-19 when movement restrictions were tight. Also, the startup says it was focussed on rebuilding and upgrading its app so there were some downtime losses arising from that.

The startup next wants to expand its footprint to smaller towns and cities in the country, it says.

Humsafar also manufactures its own bowser trucks for its own use, and it plans to double down on it using the capital infusion.

"Our long-term plans are to forge strategic partnerships with other stakeholders, and improve our service vertical," Mayank says.

Humsafar currently does not tack on any surcharges on the price of the diesel it delivers, and instead charges a small delivery fee — from Rs 50 to Rs 100. But it does plan to increase rates in the next two-to-three years once it garners enough users. However, that decision is still being contemplated and will depend on market factors, Mayank clarifies.

The startup has sold over 68 lakh litres of diesel until now. Its current daily sales volume is between 20,0000 to 30,000 kilolitres, per day.