Paytm expects to hit EBITDA breakeven in next six quarters; shares up ~5pc 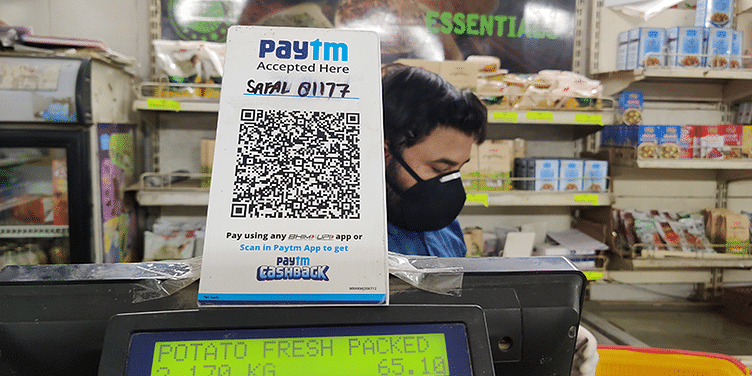 In a letter to shareholders, founder and CEO Vijay Shekhar Sharma said his stock grants will only vest once Paytm's market cap crosses IPO levels on a "sustained basis". The company's shares have fallen nearly 75 percent from their listing price.

﻿Paytm﻿ expects to hit operating EBITDA breakeven in the next six quarters, it said in a letter to shareholders on Wednesday, sending its shares up 4.92 percent after days of sustained losses.

The Noida-based fintech startup's CEO and Founder, Vijay Shekhar Sharma, in a bid to assuage worried shareholders who saw their investments in the company's November 2021 IPO deplete nearly 70 percent, said his stock grants will only vest when Paytm's market cap crosses the IPO level on a sustained basis.

Paytm listed at a market cap of Rs 1.38 lakh crore, marking the biggest bid for a public listing in India. Since then though the story has been quite different. Its current market cap, at 648.56 million shares outstanding, is Rs 41,378 crore.

The company, which has not yet turned a profit, has however been posting solid growth, especially in its lending business.

Paytm responds to BSE query, says has "no information" that may be leading to sharp declines in shares

Average monthly transacting users on Paytm's app rose 41 percent to 70.9 million in the quarter, compared with the year-ago corresponding period - an indication that the company's super app strategy is still ROI-positive.

The 41 percent jump in MTUs was a record growth in user engagement on the platform, Paytm said in its disclosure to the Bombay Stock Exchange (BSE).

"While we will publish our fiscal 2022 financial results in due course, we are encouraged by our business momentum, scale of monetisation and operating leverage," VSS said in his letter to shareholders.

Paytm's shares were last trading at Rs 644, down 70 percent from Rs 2,150, their listing price. VSS said in his letter that the company's shares were down significantly "against the backdrop of volatile market conditions for high growth stocks globally."

The fintech firm's shares have steadily declined since its listing on concerns around overvaluation, the company's path to profitability, and whether it can remain relevant in the digital payments space given the rising popularity of UPI.

Research firm Macquarie said the RBI directive significantly reduced the probability of Paytm getting a banking licence to lend, and there could be tougher times ahead.

It added that regulatory headwinds from the central bank's regulations on digital payments, BNPL and stricter KYC and compliance norms could further cloud Paytm's path towards profitability.

The brokerage slashed its target price on Paytm by 36 percent to Rs 450, and added that it remains sceptical about the company's "longer-term ability to generate free cash flow".