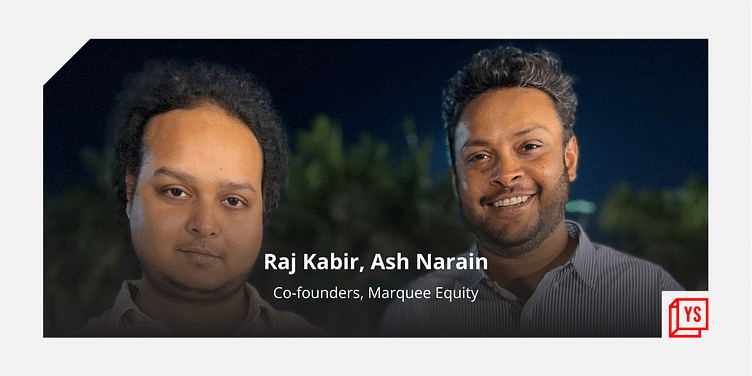 Founded in 2016, Marquee Equity’s Ash Narain and Raj Kabir are on a mission to make it easier for startups to raise funding — a daunting mission for most who go it alone. The startup has helped more than 900 enterprises raise funding to date.

"Fundraising is often harder than building a business," a startup founder I spoke to some time ago for another story told me. Funnily enough, this is par for the course for most founders, at least in the first few rounds.

From struggling to put together a balance sheet that accurately captures the goings-on in the startup, to creating revenue and profit projections, understanding the shareholders' agreement, and then finally negotiating a good funding deal, startup entrepreneurs are bound to make mistakes — which, in itself, are great learning experiences.

But, in a bid to save precious time that could be better spent building the company and innovating versus breaking one’s head over finances, founders have been increasingly outsourcing this to chartered accountants and lawyers who, sometimes, have little knowledge of the ecosystem.

Founded in 2016 by Ash Narain and Raj Kabir, Marquee Equity is essentially a one-stop platform for startups’ early funding needs.

It helps startups fundraise without having to spend too much time on things that are not directly related to their growth, such as putting together a balance sheet, getting finances in order in terms of revenue and sales estimates, creating a pitch deck for investors, reaching out to early-stage and angel investors, pitching to them, locking-in the final shareholders’ agreement, sorting out the legal and financial paperwork, and garnering interest in follow-on rounds, among other things.

Marquee Equity’s value proposition is that it makes services offered mostly by investment banks more cost-effective for startups, which cannot typically afford to spend so much in their early days.

Having been operational in the startup ecosystem in India for a number of years, the company also brings to the table its years of experience, connections, an overall understanding of the valuations being offered in a particular sector at any given point in time, and kinds of funding deals being cut — so they’re able to negotiate a good term sheet on the startups’ behalf.

"We operate almost like an employee of the startup, looking out for their best interests, and helping them refine their pitch decks when they meet investors. In a lot of ways, we handhold early-stage startups through their first few fundraises," Ash Narain, Co-founder and CEO of the company tells YourStory.

Marquee Equity has over 500 startups on its platform currently and has helped 2,500 clients. As many as 900+ funding deals have been closed by Marquee on behalf of its clients, and its total transaction value, to date, is around $3 billion.

Marquee Equity helps startups raise funding, evaluate mergers and acquisitions (M&A), and provides documentation assistance of all kinds. Sometimes, it even pitches and negotiates the terms of the funding deal on behalf of its startup client.

Ash tells YourStory that while most of the deal flow it sees on the platform is early stage, around 20 percent to 30 percent is a mix of late-stage and M&A.

Startups typically shell out $1,000 in set-up fees, alone, and then extraneous charges as per the service selected get levied on top of that $1K. When Marquee helps its startup client close a funding round, it charges a 1 percent to 3 percent “success fee” of the total money raised.

Ash says a client, on average, spends around seven months on the company’s platform, right from the documentation phase to pitching, following up, and then finally closing a deal.

Marquee has a cohort of 6,000+ angel investors and 25,000 investment firms on its platform — and it taps this extensive network when helping startups raise capital.

“Because we partner with startups at a very early documentation stage, investors on our platform often get a first, exclusive look at the startups going into the market to raise capital,” Ash says, adding its association with both ends of the fundraising spectrum — the startup and the investor — helps both come together and strike deals quickly and deftly, and close the round with a term sheet that makes all parties happy.

The startup says it has also launched a PR company that mostly caters to the startup ecosystem, called Startrooper Media, so it can provide public relations services at cost-effective rates.

Marquee Equity has not raised any external funding yet and has been bootstrapped to date. It said it will raise funds soon though as it expands globally.

Its competitors in the space include the likes of ﻿Gaja Capital﻿, ﻿Inflection Point Ventures﻿ (which also connects startups with angels), and a host of incubators and accelerators in India that help startups with fundraises quite extensively too.

Indian startups have raised over $10 billion in the first three months of 2022 and added at least 15 to the unicorn club. With more startups joining the fray every single day, Marquee Equity stands to serve a huge market.