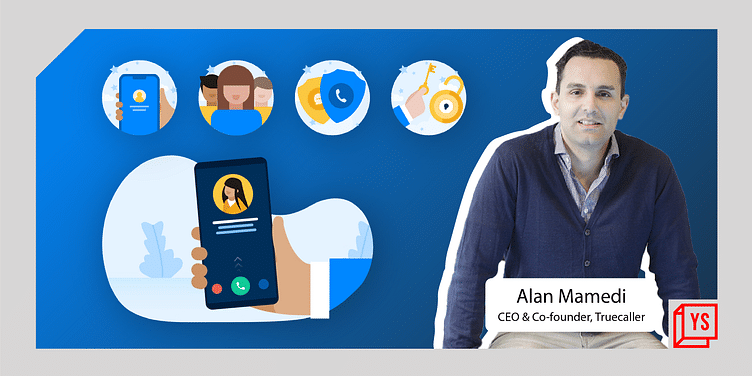 In a freewheeling conversation, YourStory’s Shradha Sharma catches up with Truecaller’s Alan Mamedi, who reveals his journey of building a multibillion-dollar business with a large user base in India, the lessons that journey taught him, and where he sees the Nasdaq Stockholm-listed company going.

Most people dream of a life replete with riches and luxury, but Alan Mamedi, born in a refugee camp in Sweden, grew up wanting to only be financially secure and stable enough to support his mother and his siblings. He didn’t want his siblings to go through the same toil and troubles he saw adults in the family suffer when they immigrated to Sweden.

And so, when he set out to build ﻿Truecaller﻿ with Nami Zarringhalam — someone who shared the same values as he did — it wasn’t hard to say NO to a $10 million offer a year after the duo launched the platform, even though friends and family fretted, much to Alan and Nami’s amusement, over how they could turn that kind of money down.

To Alan’s credit, that philosophy of not chasing excessive riches or money beyond what is necessary had held steadfast even when it comes to sharing with the Truecaller team the fruits of everyone’s labour, in the form of shareholding in the company.

Perhaps it was his humble beginnings when his mother and his siblings subsisted on whatever little they had — Alan told YourStory the only thing his mother brought with them when they migrated to Sweden were the clothes on her back and a little money — that led the founder to think of inclusive growth not as "culture-setting" in the organisation when he was building it, but as a function essential to the very fabric of Truecaller.

"What I’m most proud of is that we were always very generous with most of our employees…always gave them stocks. We’re a highly valued company today, and I don’t feel ashamed of being a highly-valued company," he tells YourStory in an interview, adding he had to fight a lot to be able to ensure everyone had a stake in the company they were helping build.

For reference, Truecaller’s employees, excluding Alan and Nami, own nearly 20 percent of the company, collectively.

"If you’re motivated by greed and money and fame, I think you’ll fail," he goes on to say.

That kind of thinking comes naturally to Alan, he admits, largely because he grew up in a very non-capitalistic household. Creativity, an innovative mindset, and passion for work need to be deeply embedded in the DNA of people who work at Truecaller, Alan says, and rewards are sure to follow.

After Alan and Nami rejected the $10 million buyout offer, which came a year into building Truecaller, the duo ran into disagreements with an early backer. They decided to buy the investor’s shareholding out, but with no cash in hand, had to resort to a bank loan.

Even then, having landed themselves in considerable debt, the two founders knew instinctively that what they were working on holding a lot of value — they were convinced they were building something useful and scalable, something that had a lot of future potential.

Truecaller was set up in 2009, at the height of the subprime loan crisis and the financial depression that followed.

Alan recalls he and Nami had just bought separate apartments for their families and had a big, interest rate-heavy mortgage already. In the midst of all that, they took on another loan to buy one of their investors out. But even though it all turned out okay in the end, Alan says he wouldn’t recommend others follow in his footsteps.

"I don’t think we were smart enough to figure out the possible outcome [of the risk we’d undertaken]. We just did it…we figured we have a computer science degree, there were jobs everywhere…if this failed, we’d just go work at McDonald’s or something. We were too optimistic," he chuckles.

But such a decision — or rather such hard decisions — come easily to founders with conviction in their idea and what they’re building, Alan says.

Blood, sweat, and tears: what it takes to build a bootstrapped startup

Those efforts obviously paid off. Truecaller, which counts India as its biggest market, marked a stellar debut when it listed on the Nasdaq Stockholm, commanding a valuation of $2.5 billion.

After ﻿WhatsApp﻿ and ﻿Facebook﻿, Truecaller claims to be the third-largest communication platform in India where nearly 77 percent of its 215 million-plus active users are located. Alan says the company is currently profitable, and remained profitable even during the pandemic.

In fact, the company made the decision to keep giving out annual bonuses and increments during the pandemic, essentially adopting “business as usual” as its modus operandi. It also hired across roles at a time its peers and other tech businesses were culling jobs and cutting or deferring salaries.

The founders’ decision to focus on profitability even more than they had already been came after a tragic change of circumstances and macros forced them to lay off a majority of their staff.

Back in 2015, investor sentiment had turned a little sour after private equity players and VCs started demanding strong bottom lines, especially from tech businesses. When funding in the market dried up, layoffs followed, across the board.

"That was the hardest thing I’d had to do and that sort of made us say we want to focus on profit so we can stand on our own two legs going forward," Alan recalls.

A conversation Alan and Nami had with Spotify founder and CEO Daniel Ek further cemented the duo’s resolve to bolster their bottom lines.

“Spotify’s CEO told me that in Europe or outside of the US, we tend to believe that the only way to build a successful company is when we sell to Google or a Facebook. And he wondered why we couldn’t stand on our own and operate as an independent company. That conversation convinced me that we needed to be focused on strengthening our business and becoming sustainable without external funding,” Alan says.

Truecaller finally hit profitability in 2019, a year before COVID-19.

The hardest ask from a founder sometimes is letting go of their day-to-day responsibilities in lieu of the bigger picture. It’s akin to the relationship parents have with their children, who grow up one day and seek more freedom — it’s hard to let go because they still feel like little toddlers who need support and guidance.

Entrepreneurship is a lot like parenthood in that sense — and so it was with Alan and Nami, who had built Truecaller’s backend from the ground up in the first few years of its founding.

The third employee at Truecaller after Nami and Alan was their chief technology officer, an out and out engineer.

“Our CTO was like ‘guys, I’m a backend engineer, can I please take over?’ and we said NO, no, we’ll continue the work on this…In hindsight, we should have let go years before we actually did. It is a tough decision to let go of your baby and let other engineers work on it," Alan admits.

As a founder, one wears multiple hats all the time, especially in the beginning. But when the company becomes big enough to start hiring people, it’s good to step back and let experts take over, Alan suggests.

"Getting to that point where you learn from other people is pretty cool and even addictive, actually."

When your last name is also your favourite fruit

Even though Truecaller is a Sweden-registered company, its largest office is actually in India where most of its engineers come from.

Building in and for India has been a rather pleasant and unique experience, Alan says, noting how the culture in the country is similar to the one in his household, which made it easier for him to relate with users and preferences here.

In India, users actually take the time to send long emails and post feedback for apps they use, compared with Western counterparts who don’t bother and move on to the next app if one doesn’t work for them. That feedback from Indian users really helped refine processes and focus areas at Truecaller, Alan remarks.

"We got addicted to working with our users in India because of their feedback and suggestions," he says.

There is also a personal quotient that Alan says has inspired him to strengthen Truecaller’s foothold as well as work alongside the people of India — and that is "being accepted as one of our own".

Being an immigrant in Sweden who did not have blonde hair or looked typically Swedish, Alan says has had to contend with not fitting in, but being “accepted” or “tolerated”. In contrast, India has accepted him so much, so quickly that Alan says he has often been mistaken as someone hailing from North India.

“In one of the Indian languages, Mamadi [Alan’s surname] means ‘mango’, and that is my favourite fruit, so that’s good,” laughs Alan, adding Hindi and Kurdish languages are very similar sounding. All these happy coincidences make it even more exciting and rewarding for Truecaller to build in India, the techpreneur adds.

As for what the future holds — Alan says he’s currently focused on setting up an Apple ecosystem team to develop new and refine existing products for the OS platforms (iOS and MacOS). Truecaller wants to continue strengthening its core products in India, while also expanding on the B2B side by partnering with delivery service companies such as Swiggy, for instance, to give people the option to rate their delivery agents, among other things.