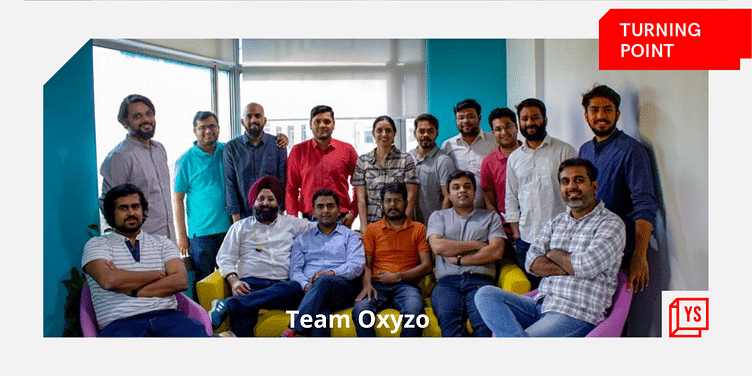 In this week’s Turning Point, we feature financial solutions platform Oxyzo, which had the distinction of being the first profitable fintech unicorn from India with a woman entrepreneur at the helm - Ruchi Kalra.

When financing platform ﻿Oxyzo﻿ entered the coveted unicorn club in March this year, it created waves for more reasons than one. It was one of the few startups run by a woman co-founder to turn unicorn.

It was also one of the few startups to enter the coveted billion-dollar valuation club at the Series A level.

﻿Ofbusiness﻿ was founded in January 2016 by Asish Mohapatra, Vasant Sridhar, Ruchi Kalra, Bhuvan Gupta, and Nitin Jain, who have a collective work experience across McKinsey and Co, Religare, Royal Bank of Scotland, ITC, and Snapdeal.

Prior to launching the startup,the founding team, in 2015, were at different stages in their careers and were looking to start something of their own. This interest allowed the team to ideate on a solution to build a business focusing on SMBs, which formed the backbone of the Indian economy.

“All of us had gained several years of corporate life and experiences, and were done with it. That is when we thought of doing something different. We wanted to be capital efficient and focus on profitability — and a combination of a great founding team and a deep market got us all excited,” Ruchi told YourStory in an earlier conversation.

OfBusiness entered the B2B procurement ecosystem, realising there was a gaping hole in the market for working capital lending solutions for SMEs to buy raw materials. Thus, Oxyzo was formed in 2017, currently led by Asish, Vasant, Ruchi and Prashant Roy Sharma.

“As we explored the B2B value chains for supply of raw materials, we understood that credit and commerce went hand in hand in these transactions. So, we could either be a commerce company solving for credit through lending partnerships / marketplace or be a standalone company and build a credit play to capture the profit pools in,” explains Prashant Roy Sharma, who leads the financial services initiatives in Oxyzo.

“We were well equipped on executive and risk skills, and hence chose the latter. From day 1, Oxyzo was a standalone company with its own set of customers and independent lending, which made sure that we were taking the right risk calls and building a self-sustaining profitable enterprise,” he adds.

Oxyzo started out as B2B unicorn OfBusiness Group’s financing platform. Its core was to provide cash flow matched working capital financing for SMEs in the traditional sectors of the economy such as manufacturing and subcontracting to buy raw material.

From solving working capital financing requirements, in 2021, the company evolved to provide a diversified product suite and cater to a broader customer base to include SMEs, mid-corporates, as well as the new age economy.

And as part of this recent growth phase, Oxyzo also launched its own supply chain platform and securities platform.

“Our deep understanding of the SME ecosystem and the associated risks, coupled with presence in raw material value chains, helped us with the product understanding, and enhanced features,” says Prashant.

According to him, this enabled the team to create features such as pay interest as per use, receipt within 90-120 tranches similar to banking products and end use lock-in by payment directly to the supplier. Additionally, the unicorn’s proprietary tech systems helped it to ensure proactive monitoring and operating efficiencies at scale, resulting in the business having an opex (operating expenses) of 2.5 percent.

Oxyzo competes with ﻿﻿Capital Float﻿﻿, ﻿﻿Aye Finance﻿﻿, ﻿FlexiLoans﻿﻿, ﻿﻿Namaste Credit﻿﻿, ﻿﻿NeoGrowth Credit﻿﻿, ﻿Vayana Network﻿﻿. It sets itself apart from its competitors in the way it approaches the value chain of borrowers, which helps it during loan recoveries.

“We’re very selective in saying that these are the anchors we need (when we evaluate your credit history)…we are not looking to underwrite people who do not have any credit history,” said Ruchi in an earlier conversation with YourStory.

Addressing demands from SMBs was at the top of the value chain for Oxyzo along with a tech-driven underwriting practices, and macroeconomic factors such as a growth spurt in India’s manufacturing sector helped plump up the company’s loan book over the past two years.

Further, Oxyzo’s recently launched fixed income and securities business line has achieved a cumulative market volume of $1.6 billion in the last six months. Oxyzo has been profitable since its inception, and is currently at a 5.5 percent pre-tax RoA (return on assets).

Oxyzo has grown to an AUM (asset under management) of $350 million, with a 100 percent Y-o-Y growth while maintaining its GNPA (gross non-performing assets) at 1.2 percent, even during the pandemic.

“We envision it to become a billion-dollar book at 30 percent RoE (Return on Equity) through addition of fee income streams in the next 12-15 months,” remarks Prashant.

Oxyzo financial services has more than 500 people across various business lines and departments across 15 hub locations. It has a tech-team of 95, led by Bhuvan.