How Vidyuttech, founded by Swiggy, Bounce execs, is enabling financing for commercial EVs 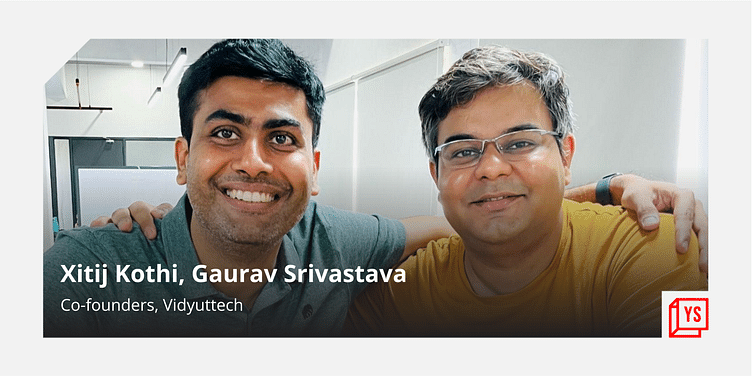 Set up in November 2021, Vidyutech is a Bengaluru-based startup that helps small commercial vehicle operators get easy access to loans for EVs.

On the days ﻿Ola Electric﻿ and ﻿Okinawa﻿ electric scooters caught fire in India, Tesla sold nearly 6,000 electric cars in the US. The two incidents are unrelated, but, at the same time, very telling of the EV (electric vehicle) market in India, which is still in its infancy.

India is still a few years away from seeing the kind of EV revolution that has played out in the US due to a host of factors such as a lack of charging infrastructure, gaps in manufacturing capabilities, inadequate financing options, etc.

Gaurav Srivastava—an IIT Kharagpur alum who worked with ﻿Bounce﻿ as one of its key leaders in the EV vertical—saw the gaps in India’s EV sector and decided to address the issues of the lack of financing options and the resale enigma in the sector.

He teamed up with Xitij Kothi, an IIT Bombay alumnus who has worked with startups such as ﻿Rivigo﻿ and ﻿Swiggy﻿, and founded ﻿Vidyut Tech﻿ in 2021.

Headquartered in Bengaluru, Vidyuttech is a digital platform that offers flexible financing solutions and assured resales of small commercial EVs.

The dilemma for commercial EVs

Ola, Okinawa, Ather Energy, and the likes have played a huge role in catalysing the adoption of private electric scooters in the country — but there’s an even bigger opportunity to be captured in the commercial EV space.

“The customer journey for commercial electric vehicles in India is quite broken...there’s a severe lack of knowledge around the purchase, maintenance, and resale of EVs,” Xitij tells YourStory.

Xitij says two main things have kept commercial vehicles operators and aggregators away from the EV space so far:

This is what prompted Xitij and Gaurav to look for solutions in the form of Vidyuttech. The startup, which has 20 employees, currently only operates in the commercial vehicle segment, and has tied up with OEMs (original equipment manufacturers) to enable second-hand EV sales, as well as purchases.

It also offers interest-free financing for battery replacements, as well as loans for the purchase of the vehicles, via partnerships with NBFCs (non-banking financial companies).

For its loan product, Vidyutech levies an 18 to 22 percent interest. The high price tag is because commercial EVs are an unexplored, untapped market, and the startup says that there’s a fair amount of risk involved in giving out these loans, especially because India is still in the early stages of EV adoption.

Commercial vehicle operators willing to take advantage of its finance product also get access to its resale platform, where Xitij says customers can get up to 40 percent of the original price they paid for the vehicle.

Vidyuttech is currently working on fine-tuning its secondary EV market, and hopes to establish it as a leading platform for the resale of electric vehicles in the future.

It has three main channels of distribution:

Its customers include individual drivers, small and medium last-mile delivery fleet owners, and mainly businesses for whom logistics is a cost centre, such as gas cylinder delivery agents, etc.

The startup did not comment on the value of transactions processed so far on the platform, or the total loans it has disbursed, but said it had "sanctioned loans for hundreds of vehicles in the first two months of being live."

It also refused to disclose its funding status.

Vidyutech’s competitors in the EV financing space include non-bank lenders such as Shriram City Union Finance, Wheels EMI, and Cholamandalam Investment & Finance Co, as well as players such as ﻿RevFin﻿.

The EV financing market is expected to grow to a Rs 40,000 crore opportunity by 2025, government think-tank NITI Aayog and the Rocky Mountain Institute (RMI) India said in a report, titled 'Banking on Electric Vehicles in India'.

The market could expand to Rs 3.7 lakh crore by 2030, the report said, adding that financial institutions, including banks and NBFCs, have an important role to play in accelerating the adoption of electric vehicles and supporting the decarbonisation of road transport in the country.