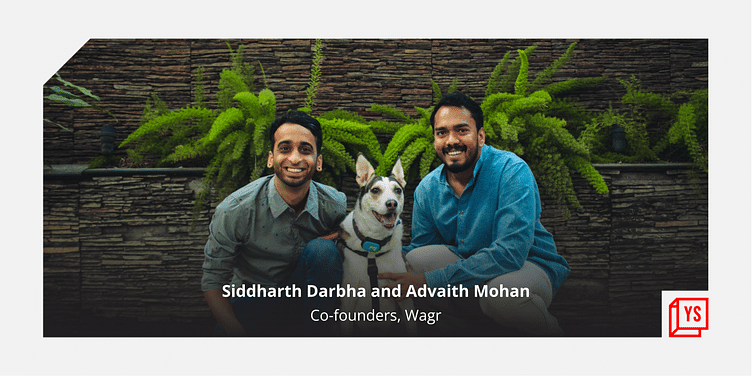 Petcare startups that are digitising and providing online services such as vet consults and shopping have made their presence felt. Bangalore-based Wagr began by launching a GPS and fitness tracker, and now offers a bouquet of pet-related services.

As a pet parent active on social media, WhatsApp and Telegram groups, and someone who keeps her ear to the ground for any developments in this space, two things have happened over the pandemic when it comes to pets:

The bad: A lot of people who adopted pets during the pandemic are now abandoning them or giving them up for adoption like they’re playthings.

The good: The proliferation of online pet portals during COVID-19 lockdowns has finally heralded a much-needed digital revolution in the petcare and ancillary services sector.

I’ve been a dog mom since the age of 12 or 13, and up until maybe five years ago, every single thing related to my dogs’ care had been done offline — vet consults, shopping for treats, collars, leashes, bedding, shampoo etc.

The digital revolution in the space began with ﻿Heads Up For Tails﻿ (HUFT), one of the earliest movers in the space, and it essentially primed pet parents to get comfortable with the online space when it comes to petcare, paving the way for more such companies, especially ones we’ve seen coming up over the last two years.

And a lot of these companies are now racing ahead of legacy players in the space because of their tech prowess.

Bengaluru-based ﻿Wagr﻿ is one such petcare startup, founded in 2016 by Siddharth Darbha and Advaith Mohan.

Wagr started out as a pet product company — a GPS and fitness tracker, built in India, to track pets, their activity levels, and, more importantly, to alert pet parents if their animals violated any geofences set up by them.

The idea was born after Wagr Co-founder Advaith’s dog ran away from home, never to be found again. The incident devastated Advaith who deeply loved the dog.

After Advaith narrated the incident to his friends, they did a quick preliminary search online and realised there weren’t good quality GPS pet trackers in India. Most that existed were made in China, and did not have too many features. Some didn’t even work properly — only gave the illusion that they did.

Siddharth and Advaith decided to team up and engineer a device, from scratch, that could not only track pets, but also help their parents gauge their activity levels over the day.

“The response was great. We had a lot of doctors wanting to associate with us too. Compared with a lot of the tracking devices currently sold in India, we feel ours is more premium and the service is definitely better,” Siddharth tells YourStory.

The startup is expecting its second batch of tracking devices to come in by the second half of 2022. The waitlist to book the device — the algorithm for which was created by Siddharth and Advaith — is open for pet parents to join.

Making inroads into the petcare industry

In 2021, having already built an ecosystem around the GPS tracker, the two founders felt that adding on more online pet services to their current portfolio was an organic next step — and they began working on a portal.

“We want to become the go-to platform for all pet-related things, whether it’s food, doctor consultations, community expertise, or just to connect with other pet parents,” Siddharth says.

The platform, which is still in its early stages but has seen traction increasing progressively, also has a knowledge section which lists homemade treat recipes, tips on pet grooming and how to handle different types of Indian pet breeds, among other topics, which the founders hope will help pet parents — experienced and new — be better butlers to their furries.

Wagr has over 50,000 users on the app, currently, and has completed 3,500+ consultations via the telemedicine offering. It has raised angel and seed funding from investors such as Nitin Sharma, Sanjay Nadkarni, Sreeram Reddy Vanga, and Sirisha Voruganti, among others. It hopes to raise another, bigger round soon.

In the pet services space, it competes with the likes of ﻿Monkoodog﻿, ﻿ThePetNest﻿, Heads Up for Tails, and ﻿Vetco﻿, among several others.

According to a Bonafide Research report, the Indian pet care industry is expected to reach Rs 5,474 crore by 2025, with a CAGR of more than 19 percent.

“The entry and expansion of many players into the petcare industry forecasts a positive view for the market in India,” another ReseachAndMarkets report said, adding “even though the online store segment holds the least market share, it is expected to be growing with the highest anticipated CAGR of 32.11 percent between 2021-2026.”

In a growing market that is still looking for more tech-led online solutions, Wagr has a lot of growth potential.