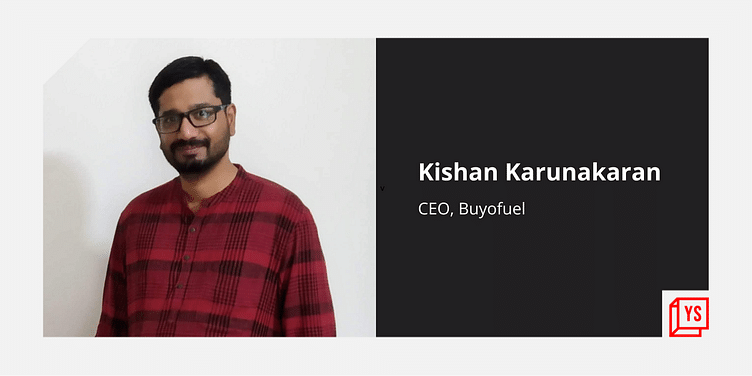 In 2019, the Indian government restricted importing of biofuels, saying it would require an import licence from the Directorate General of Foreign Trade (DGFT) — a  move aimed to localise biofuel manufacturers in India.

The country is also one of the largest to manufacture energy-generating waste.

With a proper direction in policy, it was an opportune moment to start a business focusing on biofuel. And, Coimbatore-based ﻿Buyofuel﻿ is one such gainer.

Founded in May 2020 by Kishan Karunakaran, Venkateswaran Selvan, Prasad P Nair, and Sumanth Kumar, Buyofuel is a one-stop platform for all energy generating waste and biofuels. It connects raw material aggregators, biofuel manufacturers, fuel consumers, and waste generators on a single platform.

“Biofuels never took the centre stage because there was a tremendous discovery issue and significant fragmentation of the supply base,” Kishan Karunakaran, Founder and CEO, Buyofuel, tells YourStory.

Both the waste generating sources and the biofuel manufacturers are significantly fragmented.

Biofuel manufacturers, small and medium, are extremely distributed and do not have access to fuel consumers looking for these fuels — which is a large opportunity. Similarly, they do not have easy access to waste generating sources.

Kishan says, “Despite being the third-largest consumer of energy and a net importer of energy, India could not live up to the expectations or replace significant amounts of fossil fuels.”

By 2026, India has a target to sell 20 percent blended petrol, and at present, the Ministry of Consumer Affairs, Food and Public Distribution claims the ethanol blending is at 9.77 percent.

Some of the types of biofuels are Ethanol, Biodiesel, Biogas, etc. For instance, Ethanol has many uses — used in varnishes, drugs, and preservatives and is blended with gasoline and petrol.

Coimbatore-based Buyofuel has a team of 38 members, with four on tech and 30 on operations, located across all of Buyofuel’s locations.

With over 12 years of experience as a biofuels entrepreneur, Kishan had set up a biodiesel commercial manufacturing unit TMN Biofuel in Tamil Nadu. Around the same time, he met Prasad (COO), who was working on turning used cooking oil into biodiesel as a substitution for diesel in Kerala.

To solve this issue, Buyofuel founders decided to build a platform that could help the discovery and buying of different biofuels from manufacturers easier to replace more fossil fuels. It also aims to achieve the entire transaction process — the inquiry, ordering, and delivery to take place on the platform.

The startup’s edge is that it allows its customers to connect easily and ensures they get the right quality and quantity of the product.

The Coimbatore startup made its first sale in August 2020 through the founders’ contacts, when the platform was on a closed service. It opened its doors to the public after a revamp in January 2021.

“We function like a curated marketplace for certain large buyers, who primarily deal with us because they do not want the hassles of doing vendor registrations for multiple vendors or deal with different types of small biotech manufacturers,” Kishan explains.

The high demand and supply in the market give space for such specialised marketplaces to thrive, Kishan says.

Buyofuel verifies each registration — be it supplier or buyer — and provides door-to-door delivery, which adds to its ease of doing business. He claims that about 90 percent of Buyofuel’s active users are its repeat customers.

Initially started in Tamil Nadu and Kerala, Buyofuel now has 1,000 users, of which 450 are waste generators, 200 are biofuel manufacturers, and 350 are consumers spread across Gujarat, Goa, Maharashtra, Karnataka, and Telangana.

Moreover, close to 80 percent are first-time digital users, whereas 20 percent are corporates, including UltraTech Cement, ITC, Saint-Gobain, Ramco Cements, and Welspun, to name a few.

It competes with marketplaces like ﻿IndiaMart﻿ and ﻿Justdial﻿ and specialised rival BiofuelCircle.

In November last year, Buyofuel raised around $200,000 (Rs 1.6 crore) from Infection Point Ventures and plans to raise another round in six months.

According to the Petroleum Planning and Analysis Cell, over 20.27 billion metric tonnes of petroleum products have been consumed between April 2021 and March 2022.

“This is a huge opportunity. Even if we can scratch the surface by replacing at least five to ten percent of that through our platform would be a very huge number,” explains Kishan.

On the energy crisis impacting the country, Kishan says, “The current energy crisis in India is caused by India's significant dependence on imports for coal and oil and the severe shortage in the supply of coal.”

According to him, by helping consumers source biofuels from Indian manufacturers, Buyofuel helps large fuel consumers dependent on imported coal to switch to renewable alternatives manufactured within India at the best prices in the market.