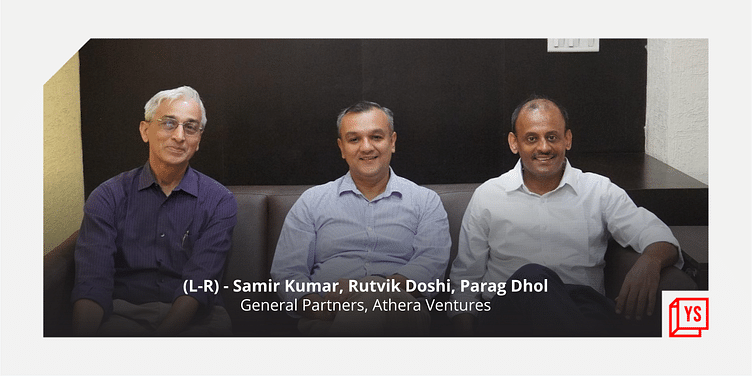 Athera Venture Partners, formerly Inventus India, recently launched a Rs 900 crore fourth fund. The VC firm started investing in startups much before others and has seen many peaks and valleys. Here’s what it thinks about the current downcycle.

Investing in startups may not be for the fainthearted during a funding slowdown, but seasoned investors like Athera Venture Partners see it differently.

The venture capital firm, formerly known as Inventus India, has been in the business since 2008 and invests in early-stage startups. It says some of its best investments were during the so-called tough periods.

Starting as a US-India cross border VC firm, tech-focused Athera began charting an independent path with the launch of its third fund in 2018 that focused only on Indian startups. Now, it has announced the launch of its fourth fund with a target size of Rs 900 crore, and has renamed the venture as well.

Athera—which has invested in ﻿PolicyBazaar﻿, ﻿redBus﻿, ﻿Pixxel﻿, ﻿Play Shifu﻿, and 31 others till now—has generated returns upwards of 20 percent.

In a conversation with YourStory, Parag Dhol, Rutvik Doshi, and Samir Kumar, General Partners at the VC firm, said that founders and investors shouldn’t be distracted by all the negative talk, and instead focus on their work.

Parag Dhol (PD): The ecosystem was excited until last December but now the mood has changed. It is the nature of financial markets that as the mood swings, the pendulum also moves. Our view is guys who keep the balance both in the good and bad times are the ones that will do well. Our best investments were made in 2009 and 2013 when the macro situation was not encouraging.

This is a 10-year business where things will go up and down, but we will continue to focus on making investments in sustainable companies. These one or two years in between, I believe, do not make a difference to the business. They are just noise.

YS: What advice would you give the founders of your portfolio companies?

PD: There are some discussions which are going on with our portfolio companies as they look at the next fund raise. If the focus is on sustainability and the company is moving in this direction, I continue to believe there is enough money available to support it.

However, there could be cases of lower valuation. Second is the case of those companies which do not have a secular growth trajectory path and will have to be supported by existing investors. The hardest question is about companies which are declining.

If this continues for some time, there are going to be quite a few difficult conversations which are inevitable. In our portfolio, the situation does not look scary.

YS: Will there be some separation among the startups now?

PD: It is like men will get separated from the boys. It is not necessarily a bad thing that in the destructive nature of capital there is a constructive path. Inefficient companies should go down and let us live with this reality.

Founders will also learn to live with that. The thing that gives me hope is looking at how entrepreneurs responded in the early days of the COVID-19 pandemic.

The speed at which they took decisions, and they did not behave like an ostrich burying its head in the sand hoping that everything blows away.

YS: How do you see large VC funds getting into early-stage investment?

PD: We expect to make four to six investments a year and there are enough quality entrepreneurs in terms of deal flow. When you have a billion dollar or $500 million fund, where one spends $2-3 million on each startup, then you end up with many companies where one may not even remember all the names. This is not sustainable and is a dangerous place of low probability.

We tell our companies that we are great believers in focus, which is an important ingredient of success where people know what their zone of competence is. We are the value guys.

YS: What was the strategic intent behind the rebranding?

Rutvik Doshi (RD): We made our first investment in 2008 and now we are investing from our third fund. With fund four, we are increasing our commitment to India.

This means two things. One where the fund size is going to be three times larger than the previous one. Two, with the rebranding and an India-centric name, it is signalling that we are completely dedicated to the country.

YS: What will be Athera’s relationship with Inventus Capital US?

Samir Kumar (SK): When we were restructuring in 2018 there were many moving parts which we felt should not be disturbed. Our third fund was completely raised by the India partners, and now we have a clear rebranding, which reinforces India centric identity.

We continue to hold links with Inventus US due to the past portfolio of investments from funds 1 and 2. This will be managed jointly till the exit.

RD: As a cross-border fund, there was an existing identity with the entrepreneurs and limited partners (LP) ecosystem. Now that four years have gone by with our third fund, it was important to signal that it is India centric with a much deeper focus and remove any confusion from past legacy.

YS: What will be the investment focus areas of fund 4?

RD: Athera has been a sector-agnostic tech-focused fund whose core DNA will not change. Fund 1 and 2 were predominantly B2C, B2B SaaS. In fund 3, the focus was the same, but we started taking early bets in emerging technology areas like spacetech startup Pixxel, blockchain firm Koinearth, and EVs in 2019.

In Fund 4, we plan to invest in about 18 startups with a significantly higher amount.

YS: Who are the LPs in the fourth fund?

RD: When we started fund 3, the domestic LPs were new. For the fourth fund, we have soft commitments from existing LPs who will come back and support us. It will be a good mix of domestic HNIs, family offices, and overseas investors.

The founders of our portfolio companies like Yashish Dahiya of Policybazaar, Phanindra Sama of redBus, Pavan Sondur and Prashanth Kumar of Unbxd, Ramesh Emani of Insta have given commitments. We expect the split between domestic and overseas LPs to be 50:50 and expect the first close of this fund in the next three to six months.

YS: What has been the performance of Athera’s past funds?

RD: The investment into redBus was a marquee exit for us around 2013-14, and reinforced the belief that companies in India can succeed. We made about 20X return from our initial investment.

From funds 1 and 2 we have significantly returned more capital with profitable exits from quite a few startups. We have given an internal rate of returns (IRR), which is upwards of 20-25 percent. It is early days for fund 3, but there are emerging winners like PlayShifu and Pixxel.

We do not see any reason why the third fund will not outperform. For example, when we see the third-year mark of companies that come under the fund 3 portfolio that have scaled to the $100 million valuation mark, it is far higher than those of fund 2.