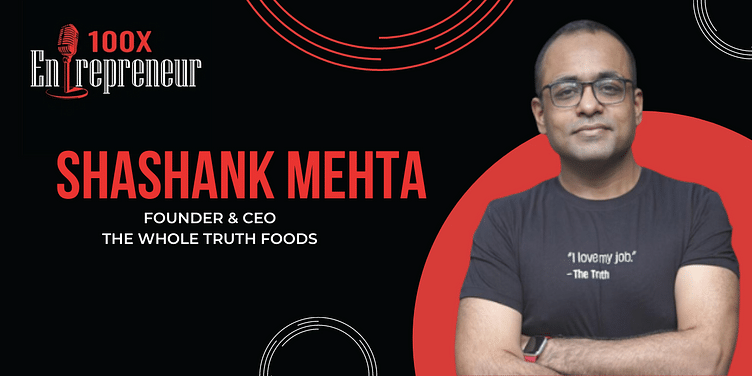 In this week’s 100X Entrepreneur Podcast, Shashank Mehta, Founder & CEO of The Whole Truth Foods shares the life events that nudged him toward entrepreneurship.

It is not easy to leave a well-paying job to start a venture and especially at a time when startups weren’t as popular as they are today.

Shashank Mehta is one such risk taker. In 2012 he quit his job as a marketing executive at Hindustan Unilever to start D2C (direct-to-consumer) food brand ﻿The Whole Truth﻿ Foods in 2019 to sell healthy alternatives to packaged food.

The idea for Shashank’s venture stemmed from his fitness journey. As a teenager, he weighed 110 kilograms, and by age 19, lost 40 kilograms. However, the weight came back.

“I started running, stopped eating and the weight loss happened. Then in three years all of it came back, then I lost it again. So I did this plus minus 30-40 kg cycle three times before I was 26. So I started working again, my weekends were free again, this time it was like I’ve come back to from 16 hours into and days a week time and now it’s like a weekday ends in 10 hours and the entire weekend is free,” Shashank tells Siddhartha Ahluwalia, Founder and Host of 100x Entrepreneur podcast.

He decided to write about the lessons he learn from his fitness journey, which led to the birth of his blog FITSHIT. For three years at Unilever, he wrote for FITSHIT every weekend.

Since Shashank was a marketer, he could see the loopholes that health food brands exploited. “They would write low fat, put a start mark, would write low added sugar but the sugar level is the same as normal etc. I used to expose these things in FITSHIT,” explains Shashank.

His blog soon took off and Shashank realised the opportunity in the healthy foods segment.

“I come from a marketing background and hence I am better equipped than the average to create a brand and this is an area of such deep passion for me that if I could positively change this part of the world it would make me feel very fulfilled. When all this came together, I had no reason to not do this, but then this will be a huge regret in life if I don’t do this,” he says.

Starting on his own

Shashank shares how he made the switch from marketer to a creator.

“There’s this theory that in every human there is either Brahma, Vishnu or Shiva, which means you’re either a creator or a manager or a destroyer, and all three are needed to run the world. We should recognise who you are. And I was very clear at that time that I am a creator. I enjoy creating and not managing. And by definition, a management job is managing not creation, creation has been done by someone,” says Shashank.

When he left the job to launch a startup, the founder says, he had no idea, money or resources to build his company.

Around this time, Jaydeep Barman, who is the co-founder of Faasos (now Rebel Foods), had just started up. This was the year 2012 and startups weren’t in trend.

“Jaydeep had raised his first series A cheque from Sequoia and he put out an email saying, looking for entrepreneurs in residence and that’s the first time I’d heard this word. And I was sold that this is what I want, that under someone else’s guidance and money, I would learn entrepreneurship,” says Shashank.

That was so lucrative to him that he told his boss, parents and everyone around about quitting HUL to join Faasos. This is where he learned the ropes of entrepreneurship before starting one on its own.

“To be honest, when I’d come back from Faasos, anyone I would speak to I would say, I’ll do anything in life but a startup, I mean it’s a tough task, I won’t be able to do it. I’m happy staying here. But then as life would have it, and this is the point where I always say, I feel that my life was leading up to The Whole Truth, but I couldn’t see it at that time,” says Shashank.

07:11 – His early career prior to starting his entrepreneurial journey

11:30 – Why HUL is considered a leadership factory?

23:40 – Scale of Faasos when he joined and left the company

28:22 – Learnings from setting up an Ayurveda-brand within HUL

34:09 – Consumer insight which HUL was trying to solve with its AYUSH proposition

41:54 – Raising around Rs 5 crore initial funding during his notice period

52:32 – Sales & revenue milestones during their journey

54:05 – Being a truth company rather than being a food company