5 deals in 300 days: Why M2P Fintech went on a startup shopping spree 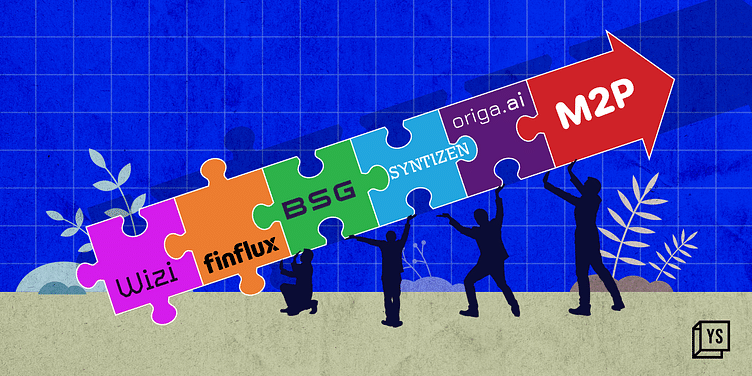 Embedded finance is not a new concept. But its ascension in India has happened only in the past couple of years with ‘everyone wanting to be a fintech’.

This brought along a slew of ‘middlemen’ in the space that joined the strings between banks and platforms to help the latter ‘embed’ financial products on their websites and apps, alongside their core product.

The largest player in the sector by valuation, ﻿M2P﻿ Fintech, indeed got its first mover’s advantage when it started as a payment stack provider in 2014, a period when the term ‘embedded finance’ was not so prevalent in the Indian fintech dictionary.

It began by tying up with banks and NBFCs to help them launch their own digital payment models for businesses looking to provide digital payment suites on their platforms. A simple example—﻿Zomato﻿ offering multiple payment options at checkout.

By 2017, the API infrastructure provider had managed to add every value to its payment stack, including debt, credit, prepaid, travelcard, QR codes, UPI, AadhaarPay and NETC toll payments, besides introducing a lending stack (BNPL) and core banking infrastructure suite for traditional banks.

Its client list includes some of the biggest names in fintech, private and public banks, and technology players.

Amongst the many startups that entered the space, M2P today has a valuation of more than $600 million, with over 30 banks and 600 fintech clients globally, Rs 40.58 crore revenue (FY21) spanned across 15 countries, and an over $100 million funding war chest from investors like Tiger Global, Beenext, DMI Group, Better Capital, Insight Partners and MUFG Innovation partners.

It has got itself a significantly large chunk of the growing embedded finance pie.

However, post-pandemic, the race for becoming an API infrastructure provider has gotten aggressive, and so has the company’s strategy to grow and uphold its share in the market.

Over all these years, M2P has been comfortably poised in the middle of banks and businesses/fintech. However, it hit a pause button, re-evaluated its growth strategy, and put the spotlight on traditional banks and ‘fulfilling their aspiration’ first.

Traditional banks have caught the FOLO (fear of being left out).

“The boardroom discussion of a bank now entails questions like, ‘If a fintech is doing something or disrupting a new space, is there value for us doing this by ourselves?’ Banks have an aspiration whether it is new banking or BNPL, or any of the products that fintechs are offering,” he says.

This has given rise to the idea of ‘digital banks’.

Digital banks are an extension of traditional banks themselves (for instance Kotak Mahindra Bank’s ‘Kotak 811 digital bank’) whereas neobanks are exclusively online and have no physical branch.

This new ‘aspiration’ of becoming a digital bank has generated a major lead for M2P, which is putting a stronger-than-ever focus on strengthening its core banking infrastructure stack for banks, enabling them to launch their digital banks at par with fintechs, alongside its already generated lead in payment and lending stack for every other stakeholder.

“We found that we are interestingly poised to take all our learnings from a product that some other fintechs are offering and meaningfully offer that to banks to launch their own products. And that is what we’ve kind of traversed over the last couple of years,” he adds.

This brings us to the acquisition play of M2P in the past 10 months. All the five strategic deals serve the said purpose, in addition to some new product capabilities like collections and engagement tools for banks, which not just add value for them but also diversify M2P’s revenue streams.

Let us understand first where banks are buying technology. This is divided into three parts—System of Execution, which includes a bank’s core banking system (CBS) or a Loan Management System (LMS); System of Exploration (the payment stack for businesses), and System of Engagement (products on top of core banking like rewards).

Since its inception, M2P's major offering for banks has been in exploration, i.e providing the payment stack. The majority of its revenue comes from the same, followed by its core banking infra and lending stack. The company declined to comment on the respective revenue share.

It is no secret that the back-end system or CBS has been long overdue for an upgrade, including the shift towards the cloud.

Going deeper into this offering, M2P acquired BSG ITSoft and Finflux. While BSG bolsters M2P’s core banking infra play, Finflux, which offers the LMF platform, is its next step to create a more compliant and stronger digital lending stack for banks (including BNPL), along with tapping into new areas like housing finance loans.

Out of 10 private banks, eight are already launching their own variant of a BNPL product on M2P’s platform.

Further, BSG primarily focused on cooperative banks, a larger segment for M2P to tap as a new set of customers are added to its list. Besides being an integrated CBS and payments stack, it will also help M2P expand capabilities in emerging use cases around blockchain and trade finance, and quicken their adoption in mainstream banking.

Interestingly, the firm has been keeping a pulse on RBI’s digital lending norms and the Account Aggregator (AA) opportunity.

Finflux, which already comes with a AA licence, adds to the feature for M2P, which is “working closely with the startup to figure out how it can leverage the AA licence from an embedded finance standpoint, especially lending”.

“In our existing business, we never used to deal with Housing Finance Corporations (HFC) as we did not have a bigger understanding. It is a very different asset class, but the LMS platform (part of core banking stack) that we offer today also caters to HFC now owing to Finflux. So if my LMS is getting used in HFC, can I leverage the account aggregator to underwrite more efficiently?” Madhu explains.

He continues, “And we can actually use that learning to go back to banks and say, can we build better products around home loan?”

The third acquisition of Wizi, a credit card-focused startup, falls under the exploration category of banks. The deal augments M2P’s BNPL stack for banks, who would be able to source new customers.

In fact, Wizi was actually a consumer-facing B2C platform which M2P managed to ‘convert’ into a B2B bank-facing business.

“Most of our BNPL stacks from a digital sourcing standpoint. Wizi is the platform that is getting used there. The strategy is sort of playing out well,” he says.

The acquisition of Origa, a loan recovery SaaS platform, and ﻿Syntizen﻿, which provides electronic customer on-boarding solutions, can be termed as “add-ons” offered by M2P to banks. The former offers better underwriting capabilities while the latter removes the hassle of customer onboarding for banks.

“There are pieces that come together and make the whole system efficient. These deals were done while we were executing other components and they were in harmony with each other,” Madhu says.

All five deals were a mix of cash and stock.

M2P had raised two new funding rounds since 2021 (the most prominent was Series C and C1 of total $91 million) led by Tiger Global and Insight Partners to fund the deals.

“A large part of deals got funded through fundraising that we did in the past 12-18 months. When Tiger came in, that's when we started the whole journey of going out and acquiring companies. We have been aggressively chasing opportunities and are now looking at opportunities outside of India to fast-track our market entry,” he says.

The bigger goal for M2P is to build a “plug-and-play” SaaS product for banks to go digital in a maximum of 90 days, as compared to a typical cycle of 12 months.

“Instead of going to 10 different tech providers for building multiple products, can we envelope everything into a single platform like a bank-in-a-box? There is much work to do on that front and we are identifying areas where we should build or look at acquisitions,” the founder says.

Other opportunities in the embedded finance space like embedded insurance and investment are under exploration, and being closely tracked by the M2P team.

The company has taken the “first partner, then acquisition” approach to evaluate if the segments offer any value to its existing business.

Currently, M2P fintech claims to be one of the largest API infrastructure providers in India. It is close to $100 million in revenue, of which 20% will come from the acquired companies.

About 15% of the revenue comes from international markets, inlcuding United Arab Emirates, Bahrain, Egypt, Qatar, Oman, Australia, New Zealand, Nepal, Sri Lanka, Singapore, Vietnam, Indonesia and Philippines, and the share will go up in the next two to three years, Madhu says.

The founders, who hold about 45% equity, claim to have a profitable India business and have no IPO plans as of now. Its revenue jumped from Rs 22.48 crore in FY20 to Rs 40.48 crore in FY21. The expenses, particularly around employee benefits and co-branding costs, ballooned in a similar suite.

While it clocked profits in the last two financial years, it hit significant losses to the tune to Rs 5.99 crore in FY21. "It was our first year of losses and was due to hyper growth. While our revenues have been growing steadily, we have been actively investing in our growth in India and abroad," the company said.

In addition, the firm invested about Rs 3.67 crore in its UAE subsidiary as well.

The financial statement for FY22 is yet to be filed.

Moving forward, M2P is betting high optimism on its plug-and-play model for digital banking. Its most recent deal is with IndusInd Bank, which will leverage M2P’s technology to deliver offerings across payments, lending and wealth management, to the bank’s customers.

“The programme (digital bank) will compete with the best of what fintechs have to offer,” Madhu says.

M2P may have hit the pause button on acquisitions to integrate its new businesses and teams, it is keeping its “antennas up” for valuable deals.

Given the large play of M2P fintech and its sheer scale, would it become tougher for smaller or new companies to compete? The company competes with the likes of Rupifi, Niro, Setu, Decentro, in the API infrastructure business. After M2P,  Tiger global-backed Rupifi and Setu (acquired by ﻿Pine Labs﻿) are the most well-funded startups.

Madhu brims with confidence as he signs off.

“My job is to ensure that we keep moving the goalposts. Even if there's a new player who comes in, it would be very hard for them to catch up to what execution we have got. It’s an already tough sector owing to banks and regulation. That way, if somebody is starting today, even with a lot of capital, it will be at least a couple of years before they catch up anywhere close to what we are doing currently.”

(The story was updated with the latest shareholding percentage of the founders and statement from the company on FY21 losses.)