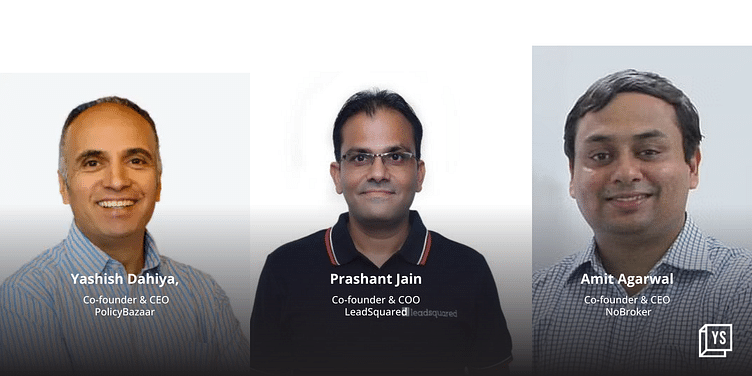 Three unicorn founders Yashish Dahiya, CEO and Co-Founder PolicyBazaar, Amit Agarwal, founder and CEO, NoBroker, and Prashant Singh, co-founder and COO, LeadSquared share their journeys, and what’s next for them.

At every stage in its journey, a startup faces numerous challenges–whether it is developing the product, building the team, finding the market fit, reaching out to customers, or adapting to the changing market.

A part of Unicorn Founder Series organised by the Startup Association of India, the webinar was hosted by Parag Dhol of Athera Venture Partners on August 5.

The founders not only talk about challenges they faced over the years, but also discuss how a frugal and a cautious approach is helping them deal with the economic downturn.

More often than not, it is entrepreneurs’ personal experiences of dealing with a problem that drives them to build a solution around it.

For example, the real estate renting and buying platform NoBroker, was born out of the pain that comes with house hunting.

“The idea came from our personal experiences,” Amit, who was previously a management consultant, said. “I had shifted to multiple cities, and my experience with brokers was pretty bad.”

When he and his co-founders started 2014, the home-renting user experience had improved as new websites had come up. But, customers still had to deal with brokers in the end, who weren’t always very reliable.

Bengaluru-based software as a service company LeadSquared had a similar start. Prashant, who had previously started and exited an IT services company called Proteans, said the team had felt the need for a sales and marketing product during the journey.

“We evaluated all the leading products of that time, did not really feel that anything was fitting the need,” Prashant said.

“During 2011-13, consumer-facing companies were taking shape. These companies were looking for a B2C (Business to Consumer) sales software, which was tailor-made for the B2C sales process,” he added.

Both these founders saw the problem and started working on the product before they raised capital.

However, Yashish of PolicyBazaar’s story is a bit different. Prior to launching PolicyBazaar in 2008, he was the CEO of First Europa, an insurance broker in Europe, which sold motor insurance.

However, the venture wasn’t very successful. When the founders decided to launch an insurance business in India, they were determined not to fail.

“Had we not got funded, I would not have started, because for me, the opportunity cost was too high,” said Yashish.

“We were building a B2C organisation in insurance. Insurance is a very difficult product to get customers, so I knew it required a lot of brand activity. If the capital wasn’t there, there was almost no point starting,” he added.

When building NoBroker, Amit and his co-founders were solving a problem no one around the world was solving. Not only was it supposed to find the tenants, but also the owner at the same time, in the same locality, at the mutually agreed upon price.

“Customer to customer is extremely difficult, it was a micro-locality marriage. It took us years to develop the network effect,” said Amit.

The team was frugal in its expenses in the initial years and started monetising early, considering the sentiment of investors and customers around real-estate. In 2015, when it started drawing customers, NoBrokers’ office premises were attacked by local brokers, who were unhappy with what it was building.

It helped convince the employees “that we are doing something important,” said Amit.

In the case of LeadSquared, Prashant notes the cautious approach and thorough research helped it grow.

“For the first two years, we did sales and market consulting. We understood the pain points of a customer,” Prashant said. The startup had to build an enterprise solution, but still keep it simple and go deeper into different verticals.

LeadSquared, founded in 2013, got its first institutional funding in 2019.

“Our initial days with VCs were tough,” he added. “We did not have the luxury of hiring a lot of senior people. Till a very significant moment of time, the founders were playing all kinds of roles.”

Having already led businesses before, Yashish and the team had created a structure on how it operated, and was audited by PwC, one of the big four accounting firms.

The challenge for PolicyBazaar was to change the architecture of the insurance industry with its model of distributors, agents and consumers. At the time, nobody imagined customers would come and buy insurance on their own.

PB Fintech Ltd, the parent firm of Policybazaar received Sebi's nod for an IPO last year and the company got listed in November.

“I don't enjoy running a public company,” Yashish said. “But it needs me, and so I'm around, and I'll do it,” he added.

Even with bearish macroeconomic sentiment in the market, his approach hasn’t changed. “We are not trying to push profits forward.  We're not trying to cut down on investments. We are trying to genuinely continue to build exactly what we were building,” Yashish said.

At the same time, LeadSquared is re-evaluating its cost-structure and trying to support its customers, some of whom have been impacted by the downturn. It is also increasing its investments in sales.

“These are times when you actually can acquire larger market share,” Prashant said. The startup is looking at acquisitions in the short term.

In the long run, the co-founders plan to get the startup listed in India.

For NoBroker, the aim is to “take no broker to the situation, where we become a household name,” Amit said. After it raised $210 million last year, the startup is cautious in its spending.