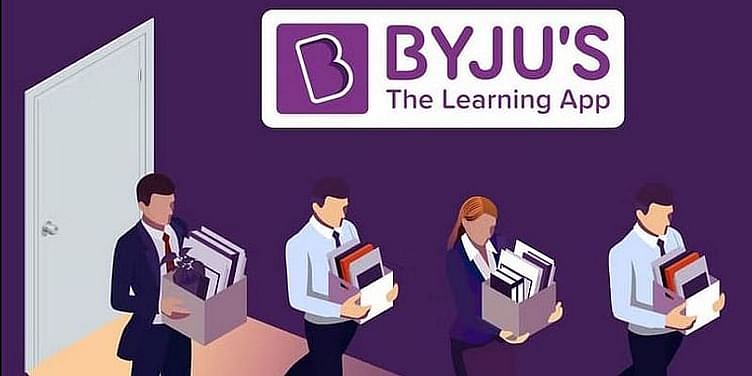 This comes after the company was in news about the massive layoffs in Thiruvananthapuram.

Edtech giant ﻿BYJU'S﻿ has allegedly told its Bengaluru employees to voluntarily resign or face termination. This comes after the company courted controversy in Thiruvananthapuram, Kerala for allegedly closing its offices and resorting to mass layoffs.

A BusinessLine report stated that the edtech firm’s management has held one-on-one conversations with hundreds of employees in the past 7-10 days. The talks happened with employees across verticals such as sales operations, media, recruitment, and customer retention.

Karnataka State IT/ITeS Employee Union (KITU) also stated that it has received up to 12 complaints from employees about forced resignations, the report noted. KITU said that “massive retrenchments are happening in BYJU’S in which hundreds of employees made to forcefully resign from the company. KITU strongly condemns this illegal action by the management of BYJU’S.”

However, a BYJU’S spokesperson denied the development, responding to BusinessLine queries.

“It is absolutely false that BYJU’s is forcing employees in Bengaluru office to resign. BYJU’S is a responsible organisation and follows all laws of the land. BYJU’S employs nearly 50,000 people across India. Around 5%, or 2,500, of these positions, are being rationalised as part of BYJU’S current strategic plan to grow profitably and sustainably,” the spokesperson said.

The spokesperson told BusinessLine that each of the employees affected by the restructuring is being informed individually. The edtech firm further stated that all employees will be offered an assured path to return to BYJU’S if they cannot find a job in the next 12 months in new roles that are more relevant and productive for both the company and the employees. However, an impacted employee denied being offered such an option, the report noted.

Last week, a group of employees from BYJU’S met with V Sivankutty, Kerala’s Minister for General Education and Labour, to complain about the startup forcing 170 employees in Thiruvananthapuram to resign.

Later, a BYJU’S spokesperson said the “reports around BYJU’s operations in Kerala are far from reality.” He further added, “BYJU’S will add three more offices in the state in this financial year, taking the total number to 14 and increasing the number of employees in Kerala from 3,000 to nearly 3,600.”