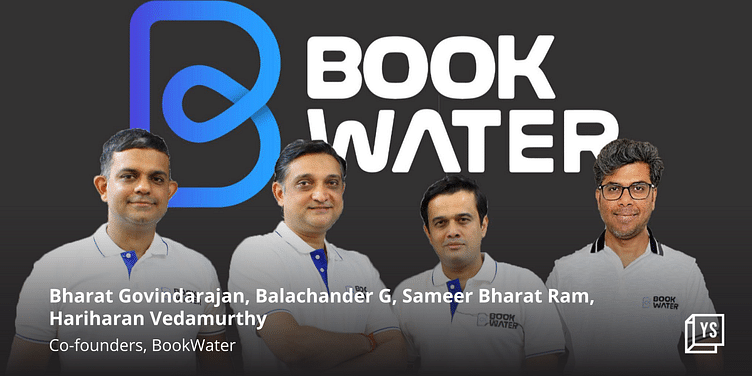 BookWater is an IoT-powered and quality-based water delivery platform. Its patent-pending technology lets you scan the QR code on a water can and discover its quality.

The consumption of bottled water in India is growing significantly. According to the National Statistical Office’s report of 2019, an estimated 12.2% of urban households rely on bottled water for their drinking water needs - up significantly from 2.7% in 2009.

But the question is: is this water safe?

Corporates and households are the biggest buyers in this $5.55 billion bottled water market in India where brands like Bisleri, Kinley, Bailey etc have seized a recognisable share. However, the market is flooded with unorganised players and that’s where the problem lies.

Speaking to YourStory, Sameer Bharat Ram says that some of the canisters that drinking water is stored in are not even food grade. These plastic containers are recycled so often that they are “no longer safe” to store drinking water – the elixir of life.

It was to solve this problem that Sameer and his co-founders Bharat Govindaraghavan, Balachander G, and Hariharan Vedamurthy started Chennai-based BookWater, one of the world’s first IoT-powered and quality-based water delivery platforms. The startup’s patent-pending technology allows you to scan the QR on a water can and get all relevant details about the quality of water it holds.

BookWater was launched in 2021 but started operations in July 2022.

The world of connected water cans

While PET cans are considered safe to use for food packaging, they are often abused by using them over and over, Sameer says. Many also degrade as they are left out in the sun for long – this can cause serious harm to human health in the immediate and the long term, he adds.

Enter BookWater, which with its QR code lets consumers not only track the quality of water but also the number of times their water can has been recycled and when it will be upcycled. Sensors fitted in water stations help determine the quality of water that is being filled into the cans.

“Water filling stations have a compliance to adhere to water quality standards but sadly, not everyone follows that,” Sameer says.

Recalling an episode, he says he was visiting a water filling station where he found that the RO system was not functioning. However, litres of water had been dispatched to the market by the time this was noticed.

“We are solving this serious problem with BookWater. Sensors installed in the station won't allow any water to be filled into the cans if there is any kind of contamination,” he says.

Every water can is tracked throughout its value chain, from the place where the water is purified and the distribution phase to the use phase and return of the cans to the purification and filling station.

“This has been achieved through a patent-pending process where every canister has a unique identifier that allows tracking,” Sameer explains.

The business is currently operating largely in the B2B format where corporates like Ascott Group of Hotels, Hindustan University, and Junior Kuppanna chain of restaurants are using the services.

Sameer says the startup is delivering close to about 1,000 cans a day as of now and plans to launch B2C through a distribution channel soon.

Taking on the big brands

BookWater aims to revolutionise the way water is consumed in India by offering quality at competitive prices. Water is priced at Rs 55 for a 20-litre can, affordable to the middle-income group, which is the highest consumer of these water cans.

“Local water cans are priced at around Rs 45 while brands sell their cans at around Rs 80 or Rs 85. We have priced the same capacity water cans at Rs 55 – making it accessible to everyone. Now who doesn’t want good quality water, that too when they completely know what is going into their glass?” Sameer asks.

BookWater has partnered with four filling stations in Chennai, which have “a dedicated line to fill water in cans”.  The founder says he didn’t face any challenge in onboarding filling stations as they get more revenue generation opportunities.

The business operates in a subscription model - the company delivers water cans to the customers.

BookWater raised an undisclosed seed round from Ranganath NK, MD of Grundfos India, and Sameer himself in 2021 and is in talks to raise a Series A round.

What’s next for BookWater? Enter the Bengaluru market, Sameer says.