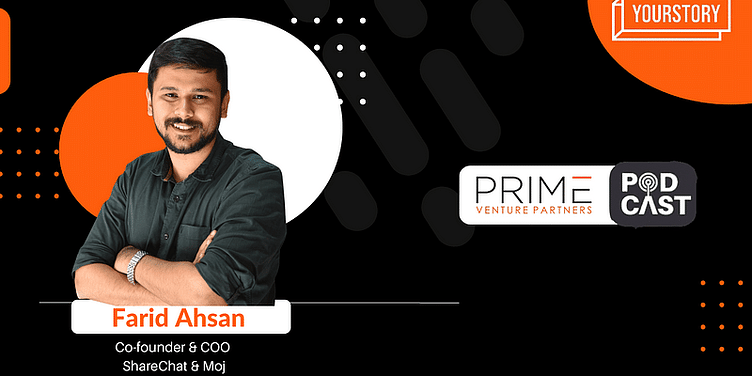 In this latest episode of Prime Venture Partners Podcast, Farid Ahsan, Co-founder, ShareChat, talks about the inspiration behind starting the company, the journey, and the lessons learnt so far.

﻿ShareChat﻿ was started in 2014 by three IIT Kanpur students--Farid, Bhanu, and Ankush. Before their graduation, they set out on leveraging their coding, design, and user understanding abilities to build an experience for people on the internet.

Back in 2013, there was a lot of buzz around anonymous messaging apps like the Secret, Whisper, etc. in the US. Farid and others thought of a product which was a different kind of a WhatsApp group chat, wherein people would make content and share it anonymously within a group of people they knew. But the launch didn’t receive good feedback.

Moving on, the idea of building a content platform came from the logic that someday India would come online and all the Indians would want to use the internet in their own language. This creating an opportunity for someone to build a platform, which would act as a launchpad for first-time internet users.

But still, ShareChat wasn’t born yet. The co-founders launched a debate platform and were trying growth hacks on Facebook and WhatsApp groups when they stumbled across some interesting insights. First was the demand for WhatsApp groups--it was reliable on 2G and Edge, and as most of the people were coming from tier two and three cities, a WhatsApp group wasn't hard on the vocabulary. The second was, because of the popular media being a lot more around the anglicised versions of Indian native languages, people didn't really want English in their keyboards. The final observation was that first-time users couldn't understand the nuances of the internet other than doing a simple YouTube or Play Store search.

"So, combining all these observations together, we thought maybe let’s build a product where we have a continuous speed of content in Indian languages, which works the feed, which should work on very low-end smartphones. It should also work on patchy internet connections. So, the backend has to be a lot more like WhatsApp and a lot less like Facebook. And also, just put the people who belong to one language together," Farid adds.

Initially, many founders are doing a lot for distribution, reach, and engagement, but not so much for monetisation. And when the talk with investors happen, it is important to be true to them and yourselves. Farid explains, “First of all, you have to build a reason for why your top of the funnel will keep expanding and why people will keep coming back to your platforms. And secondly, you have to build those experience traps with which people get addicted to your product or get stuck on your product.”

But to build these traps, experiences, and the top of the funnel takes time. And even if you are able to attract the first bunch of users, there’s a certain critical mass before which your product will not be monetisable. Hence, being honest to the math and the destination is important, advises Farid.

The ups and downs of a founder's journey

Farid recalls his experience and lessons learned starting with an analogy--while baking a cake, you don’t congratulate the chef when he gathers the ingredients. So, capital is something like gathering ingredients. You should focus on the act of baking and not worry about how many ingredients you have. You gotta make do with whatever you have. When times are great, you’ll be able to gather a lot of ingredients. And when times are bad, obviously the markets will be like this.

He advises that founders should understand that people won’t stop investing because they don’t feel like it. People are in the job of investing and when you can’t deploy the required capital, founders should think if they don’t necessarily need a lot of capital they were taking up earlier. If you are a good chef, you’ll bake your cake well, irrespective of the number of eggs you get.

12:45 - How First-Time Internet Users Use Internet