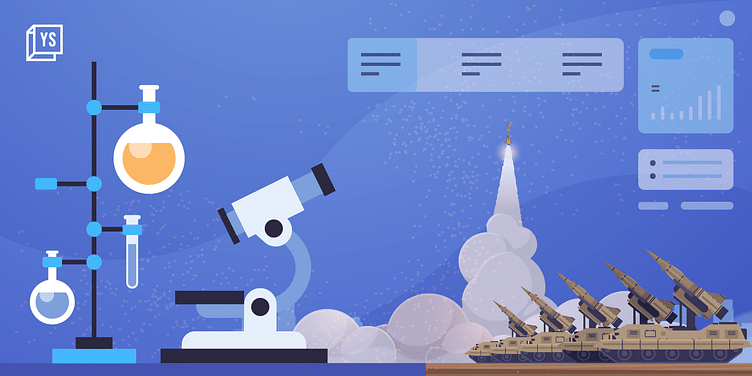 When Ganesh Babu left for lunch on a cool October day last year, he did not know that the chemicals he left behind in a beaker could potentially take India closer to its growing space ambitions.

Ganesh had been working to create a special set of materials for some time, giving up in frustration at one point–only to pick up the challenge again. And as he returned to his lab at the IIT-Madras after a satisfying meal of rice, sambar and some sauteed vegetables last October, he wasn’t expecting much.

“I thought I would have to wash the beakers yet again… after another failed experiment,” says Ganesh, Founder and CEO of CeraTattva InnoTech Private Limited. He was pleasantly surprised to find that this particular combination of chemicals had worked. Ganesh still washed the beaker though–this time to redo the experiment and validate his findings.

But what are these special materials and what is their link to India’s space ambitions? Ganesh had a breakthrough in creating unique “preceramic precursors”—certain highly adaptable materials that can, in turn, produce products that withstand extreme conditions.

India has been known for efficient and cost-effective space launches but it doesn’t currently have the means to create reusable rockets that come back to earth after doing their job in the sky. This ability will make its launches even cheaper. Just last month, ISRO Chairman S Somanath said at a press conference in Bengaluru that India wants to create reusable rockets for the world.

One big challenge in creating rockets that can re-enter our atmosphere is that they need to withstand much higher temperatures than the ones that go on a one-way ticket.

This is where the preceramic precursors that Ganesh created come in. These unique chemical formulations, made using polymer-derived technology, are liquid, which gives them three distinct advantages over ones made using conventional powder technology (solid).

One, the production costs are much lower. For instance, you would need temperatures of 1,800-2,000 degree centigrade to make silicon carbide ceramic using powder technology. However, to make the same using the polymer technology, you don’t have to go beyond 1,300-degree centigrade, according to Ganesh.

Two, it’s extremely difficult to make complex shapes, such as those used in rockets, using powder technology. And three, products made from the powder technology do not retain their homogeneity as well as those made from the liquid formulations. Simply put, homogeneity means the quality of the product created is consistent throughout. These attributes give the preceramic precursors several uses not just in space launches but also in other strategic sectors like defence and nuclear energy.

But there’s more. With Ganesh’s breakthrough, he says ﻿Ceratattva﻿ is now the first startup/private company in India with the capability to make preceramic precursors that are both non-silicon and non-oxide-based.

The “non-silicon and non-oxide part” is crucial because that’s what gives the preceramic precursors created by Ganesh the potential to withstand extreme conditions. “Non-oxide- and non-silicon-based precursors generally are very expensive,” says Ravi Kumar, Co-founder, Chief Consultant and Advisor of CeraTattva. “Nobody generally works on those simply because of the required infrastructure and costs involved… unless they have a well-funded project.”

Though the team is yet to test its unique formulations on an industrial scale, it is pretty confident that these will work when assessed.

“We do not have the capability to test beyond 1,600-degree centigrade, which is why we are banking on organisations such as ISRO and DRDO to validate our formulations,” says Ganesh, who points out that NASA and other space agencies abroad have validated products made from similar preceramic precursors after rigorous testing.

“Since we are able to develop that material through polymer-derived technology, then it’s a given this would also be able to withstand the reported higher temperatures,” says Ganesh.

Professor Vikram Jayaram, Dean, Materials Engineering at the Indian Institute of Science (IISC), says that polymer-derived ceramics have shown a lot of promise. The challenge for a startup, he says, would be to find an economical way for using the preceramic precursors. But he is quick to point out that if the material is good and the application strategic, then cost will be a secondary factor.

The breakthrough in creating the preceramic precursors may have been sudden but it was only possible after a long, hard journey that began over two decades ago.

Prof. Ravi from CeraTattva got to know about precursor-derived ceramics in 2001 when he went to do his PhD in Germany. “The lab I worked at were pioneers in this field and were doing some great work,” he says.

While doing his PhD and postdoctoral programme, he realised that this field required the coming together of experts in chemistry, thermodynamics and materials science and engineering.

“Most of the people who came to the Department of Metallurgy were not chemists and this field is all about materials and chemistry, to begin with where the engineering part comes only later,” says Ravi. This pushed him to collaborate with the Vikram Sarabhai Space Centre (VSSC) on some precursor-derived ceramics projects initially.

“My confidence to start a company grew only after Ganesh joined the department,” says Ravi. “He came with a Materials-Chemistry background and had worked at VSSC and in a company in a similar field.”

Ganesh joined his team in 2018 after working in a company in the polymer industry. Prior to this stint, he did his PhD at VSSC in polymer-derived ceramics. He was seeking to further his knowledge in this field and signed up for IIT-M’s post-doctoral fellowship to join Ravi’s team.

While CeraTattva—co-founded by Ganesh, Ravi, Raghunath Sharma and Abha Bharti— is on the verge of producing preceramic precursors on a large scale, it has also successfully produced a machine to produce fibres using centrifugal technology.

This machine was developed during the pandemic and required a lot of “jugaad”—simple workarounds—due to the non-availability of labs and machinery. “We had a water pump at home. I removed it and took the motor out. In addition, I took some vessels from the kitchen, and ended up destroying them to make a crude set-up to make fibres,” says Ganesh, recalling the “scoldings” from his mother for the chaos and destruction of household articles.

Due to the non-availability of chemicals, Ganesh used melted sugar to spin fibres—similar to how cotton candy is made. He sent a video of the process to Ravi to demonstrate that it was possible to make micron- and nano-sized fibres used in aerospace and biomedical industries, among others, with the technology detailed in a research paper he had sent.

“Professor Ravi got me special permission to enter the lab (at IIT Madras) during the lockdown to try the process with chemicals and the crude set-up I had made,” says Ganesh. It worked just fine, which led Ravi to shell out around Rs 1 lakh to convert the crude set-up to a small prototype.

Once they tested and validated it, the trio (Ganesh, Ravi and Raghunath) decided to patent this equipment called ‘Ultraspinner’ in October 2021.

“The throughput in Ultraspinner is 1,000 times that of the existing technology. In an hour of operation, Ultraspinner produces 240 grams of fibres and consumes only 9.2 watt-hours of power per every 1 gram of fibre,” says Raghunath.

In addition, the Ultraspinner does not require any high voltages to operate. “The Ultraspinner is as safe and as easy to use as plugging in any electrical appliances in your kitchen such as a blender or refrigerator,” explains Abha.

Applications of the innovation

Among all the applications of CeraTattva’s innovations, the team is most excited about the chances of their unique formulations and fibre-making capabilities being used in India’s reusable launch vehicles sometime in the future.

“Re-entry is a crucial and extremely difficult phase of an orbital or interplanetary journey for the vehicle components that are affected by extremely high thermal fluxes brought on by resistance against the atmosphere,” says Raghunath. Thermal flux is the rate of heat energy that passes through a surface.

Raghunath explains that the ultra-high temperature ceramics, for example, can further push the high-temperature usage to 2000-3100 degree centigrade given their robust mechanical strength, chemical inertness and configurational stability.

ISRO has expressed interest in purchasing some non-oxide- and non-silicon-based preceramic precursors from the startup. Ravi says this opens up a huge opportunity for CeraTattva as there’s no other commercial vendor in the country that can supply these unique formulations.

“Outside of the country, no vendor will supply it to India even if they’re manufacturing because of the strategic nature of these materials,” explains Ravi. “We believe the materials we provide will help India become strategically self-reliant.”

IISC’s Prof Vikram says ISRO considering such innovations is a huge step. “Whether ISRO is successful or not (in terms of getting the end products right) is not directly important at this point. The point is they seem to be willing to invest in a process necessary to explore the usefulness of these materials,” he says.

CeraTattva, which has received a seed amount of Rs 10 lakh from IIT-M Incubation Cell, is looking to raise more funds to set up a facility for large-scale manufacturing of its preceramic precursors.

The Chennai-based startup says it is in talks with a few investors who have shown interest in its innovations.

Ravi says their startup’s unique formulations and the potential technology to make long ceramic filaments/fibres will help accelerate the country’s strategic programmes including the development of hypersonic missiles.

“If India wants to be self-reliant, this should be one of the first things they should focus on,” says Ravi.“Startups generally don’t get into materials development programmes. We need to succeed so that it encourages other similar startups to come up in India.”