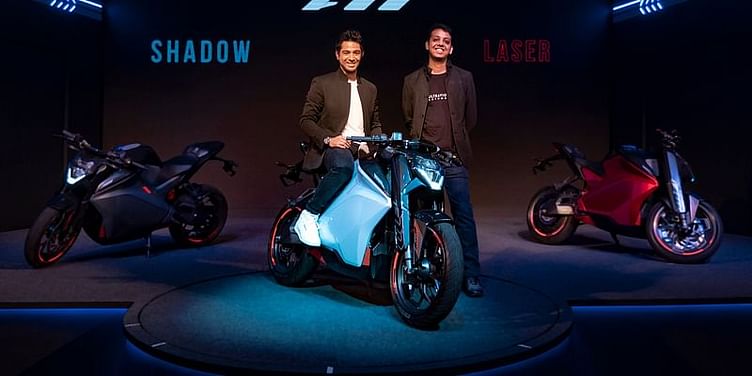 Ultraviolette electric superbike F77 will be officially launched on November 24, 2022.

Bengaluru-based ﻿Ultraviolette Automotive Pvt Ltd﻿ announced that its highly-awaited F77 electric superbike will have a massive battery range of 307 km on a single charge.

On the occasion of National Battery Day, co-founders Narayan Subramaniam and Niraj Rajmohan spoke in a press meet about peaking their battery capacity after devoting almost five years to remodelling and retesting.

“For the past couple of months, we were having a monthly campaign called Beyond Asphalt where we targeted to push the bike to its limits and see its breaking point. The real-time data that we retrieved is what has gone into making the final iteration of the battery,” said Ultraviolette co-founder Niraj.

Amid the ongoing noise of EVs catching fire across the country, Co-founder and CEO Narayan revealed that the bike is being modelled to have a durability of seven to 10 years.

The team also revealed the final naked version of the F77 and its new aluminium-covered battery pack which will have a passive air cooling system over the usual liquid cooling systems used in EVs.

Ultraviolette: Not the next 'Avengers' movie, but a sporty bike and battery tech startup

In the aftermath of the pandemic, the bikes were tested in different conditions—from city asphalt to rocky hills and torture tracks.

“We want stability and consistency for these bikes, which is why we are not going for mass production and will have about 10,000 of these bikes for the initial year of launch,” Narayan added.

The team is simultaneously working on creating an ‘experience zone’ in Indiranagar, Bengaluru for bike enthusiasts to look, feel and experience the bike, and what went into making them.

Ultraviolette will open the online pre-booking for the F77 on October 23, 2022 at Rs 10,000. However, customers will have to wait until November 24, 2022 for the official launch of the bikes. The specifications of the bike, market roadmap, and dealership plans will also be revealed on the launch day.

Founded in 2015, Ultraviolette’s superbikes will be competing with bigger fishes like Energica EGO+/RS, Harley Davidson LiveWire, and Lightning LS-218. However, the founders revealed that their main competition is the IC engine vehicle industry.