Why Bengaluru-based Tracxn decided to go public at $10M ARR 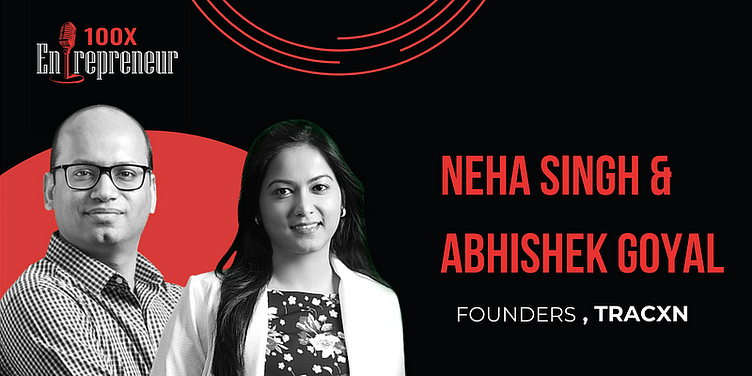 In this week’s 100X Entrepreneur Podcast, Tracxn co-founders—Abhishek Goyal and Neha Singh share their views on why they chose to file for IPO at an early stage, considering its annual recurring revenue (ARR) of $10 million and more.

Every entrepreneur dreams to take their company public. So did Abhishek Goyal and Neha Singh, who recently listed their startup ﻿Tracxn﻿, founded in 2012, on Indian bourses.

Last year, 125 Indian companies raised over $18 billion through initial public offerings (IPO) in public markets, of which over $7.3 billion was raised by 11 Indian tech startups, including ﻿Nazara Technologies﻿, ﻿MapmyIndia﻿, etc.

Tracxn is one of the world’s top five market intelligence platforms for private companies, used by over 800 customers in more than 50 countries.

Today, Tracxn has more than Rs 67 crore in annual revenue, valued in the public markets at around Rs 800 crore-900 crore. It also turned profitable this quarter.

In this week's 100X Entrepreneur Podcast, Abhishek and Neha share their views on why they chose to file for IPO at an early stage, considering its annual recurring revenue (ARR) of $10 million and more.

Preparing for an IPO

According to Neha, Tracxn started working on its IPO listing towards the end of 2020. In August last year, the company submitted its Draft Red Herring Prospectus (DRHP) and received the Securities and Exchange Board of India’s (SEBI) approval at the end of 2021.

“I think it's been a fairly exciting journey, and we’re excited about continuing this journey as a listed company for decades to come now,” says Co-founder and CEO Neha.

Since inception, the co-founders had planned to list the company on Indian bourses, despite Tracxn clocking nearly 70% of its revenue from international markets.

“Probably, when we started, we took that decision of having our headquarters in India and build the whole team and everything from here, like Make in India, although Tracxn has a global customer base. The end of 2020 is when we started working on the listing process seriously because the Indian markets looked sort of conducive,” states Neha.

Abhishek says entrepreneurs need to be mindful of everything from the early stages of the company before going public.

He says, “You have to ensure that you are not cutting any corners on any compliances because otherwise, before the listing process, you will end up spending a lot more time.”

“We were mindful of doing everything right from very early on because, retrospectively, it takes a lot longer to prepare if you are not being mindful. Because of that, I think it took us a lot less to prepare for our actual listing process eventually,” he adds.

Tracxn has set a new trend for Indian startups by going for an IPO at just $10 million ARR, while the market expects companies to have an ARR between $100 million-$200 million.

Abhishek says, in the case of Tracxn, the co-founders jumped on the first opportunity they found to go for an IPO. Nonetheless, he adds that they are still learning when startups or private ecosystems should transition to public markets.

According to him, the sweet spot to enter the market is between $2 million-$500 million valuation, and entrepreneurs can accordingly plan for it.

He adds, “Over time, as we go forward, we will sort of find more sweet spots as to what is the way to enter. But what I’m really excited about is that we’re entering at a stage, where there’s a lot of growth to happen for the next two to three decades.”

“One of my aspirations is that like in my parent’s generation, people said they bought a Reliance stock and it helped them marry their children or send their kids to school. So eventually, one day, 20 years down the road, if I meet shareholders like that, that will be a dream come true. And that will be the true purpose of going public at this stage,” Abhishek concludes.

To know more, listen to the podcast here :

05:06: Splitting the roles within the team to be prepared from Day 1

05:41: Documents to submit to SEBI or any other regulator for the DRHP

11:33: Mentors who advised on going public

18:34: A rollercoaster set of emotions they went through

22:24: Moments of giving up during the whole process

24:16: How to prepare mentally before entering the IPO process?

31:26: What does it require for tech companies to go public?

35:03: Playbook where companies can go public and build in long-term