Fostering a culture of inclusivity and equity, Cisco President Daisy Chittilapilly is all about creating partnerships to maximise impact 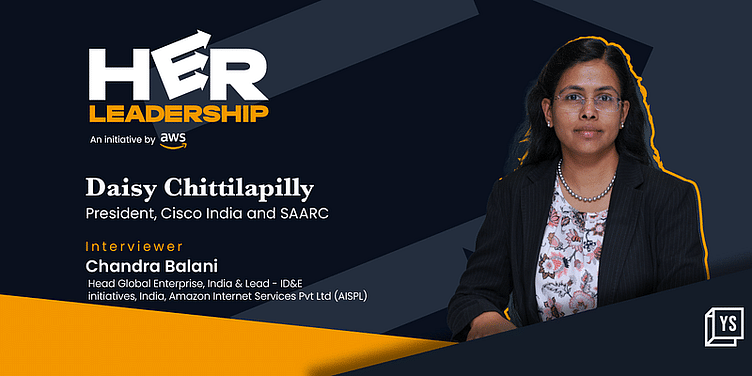 In the final episode of the second season of ‘HER Leadership’, Daisy Chittilapilly, President, Cisco India and SAARC, shares excerpts from her journey, replete with plenty of mentorship, support, success and growth.

Calling herself a product of many generous mentors and sponsors, Daisy Chittilapilly, President, Cisco India and SAARC, notes that the only way you can pay them back is to pay it forward. Reflecting on her two-decade-long stint in the technology industry, she candidly shares excerpts from her life and learnings with YourStory.

Daisy was speaking with Chandra Balani, Head Global Enterprise India & Lead - ID&E initiatives, India, AISPL, in the final episode of the second season of the ‘HER Leadership’ interview series powered by AWS and YourStory. The ongoing series captures the struggles and success stories of India’s most prominent enterprise business leaders and hopes to become a platform that inspires more women to join and grow in the workforce.

How a fluke became a two-decade-long illustrious relationship

Despite graduating from engineering school, Daisy never planned for a career in IT; the opportunity came her way by chance in the form of an offer letter from Wipro. Getting into Wipro made her realise the excitement of what a sunrise industry was then. “I really started to appreciate the opportunity that I had, because, in the mid-90s, we [were] still waking up to the power of technology and what it [could] do for industries, segments, [and] governance in India,” she says.

In the 90s, at the height of the shift to software development, she turned a deaf ear to the well-meant advice she received, telling her to settle for a predictable and comfortable career, and continued to build circles of influence, something she has done for over two decades now.

Currently leading the Cisco operation for India and SAARC, Daisy identifies that her job as a leader falls into two buckets. One is to continue to push forward Cisco’s strong culture of respect, honesty, dignity, and empathy, leading the front on building a culture of inclusivity and equity, and acknowledging the impact this has on their business.

“The second and a major part of my job is all-round creating partnerships,” she says, adding that the internal focus is to make Cisco a great place to work and the external focus is on building ecosystems to maximise their impact in this region.

Daisy believes it is important to examine the reasons behind the massive adoption of hybrid cloud and hybrid work today, adding that “irrespective of what industry you've been in, hybrid work is the design blueprint for managing talent.” This hybrid work, she says, is forcing businesses to rethink their conduct and business models, as we are seeing a growth in flexible workloads and application builds, many of which cannot be served from in-house data centres.

“So this is the space in which both AWS and Cisco have to come together to make lives easier for our customers because this is a degree of change that most customers, irrespective of which sector or segment they’re in, haven't seen before,” she adds.

Acknowledging that while some representative numbers look good for women in leadership, a lot is left to be desired. To improve this, Daisy talks about the multiplier effect initiative they practise at Cisco, where people take a pledge to proximate themselves to someone unlike them and connect with them. This allows people to educate themselves, become empowered to advocate for others, and change the mix of business insights.

“There is power in sharing experiences,” says Daisy, adding that it is one of the ways to share knowledge and provide support to someone. She says she has come to embrace the power of leadership, mentorship, and sponsorship to advocate for people who probably don't feel they can raise their voices.

This is particularly useful when she mentors individuals and startups in the tech space. Thanks to her ‘learner gene’, Daisy says she is always learning, from meetings, from the mind-boggling innovation startups are doing today, and from new ideas around her.

The power of mentorship

Daisy admits that she hadn’t been very intentional about building her career and brand. The only strength she had then was a high-risk appetite. “Saying ‘yes’ to every opportunity has helped broaden me out and pick up skill sets that, maybe, staying in the same place and doing the same thing may not have led to,” she adds.

“But, intentionality was not part of my vocabulary,” says Daisy, adding that it took a mentor to sit her down and advise her to be intentional about her career that got her to shift her perspective on her work.

She notes that she has been fortunate to have mentors and peers who have encouraged her and rooted for her over the years, who have consistently sat her down to ask her what she wanted to achieve, and who have formed what she calls her “personal cheering squad”.

For Daisy, having a strong circle is very important to grow and to guide one another in their careers. “There are a bunch of people I’ve carried forward relationships [with]... I think it’s great to have that in your corner,” she says.

From tackling roadblocks to rising through the ranks

“My worldview is not to look at anything as an obstacle,” says Daisy.

She further adds that sometimes, people are in unavoidable circumstances, but they can choose whether they want to be a part of that circumstance or not. Not wanting to diminish the helplessness of people who find themselves in situations they cannot get out of, however, she adds that “in the corporate world, we are in a world of our choosing”.

She acknowledges that so much of this is about people giving away the power they have. Her advice? “It is your power; don’t squander it by giving it away.

Daisy reiterates that she is extremely calm under pressure, which has been one of her biggest strengths. She also adds that she is a people person.

Talking about her weaknesses, she says that she tends to interrupt people, so she is constantly working on her listening skills. Additionally, she is conscious of her high change agility, which may not land well with others.

She ends by recalling the best advice she has ever received which was to not take the highs too high and the lows too low. Over the years, she has also learnt to stick to the basics and focus on building a sustainable business.