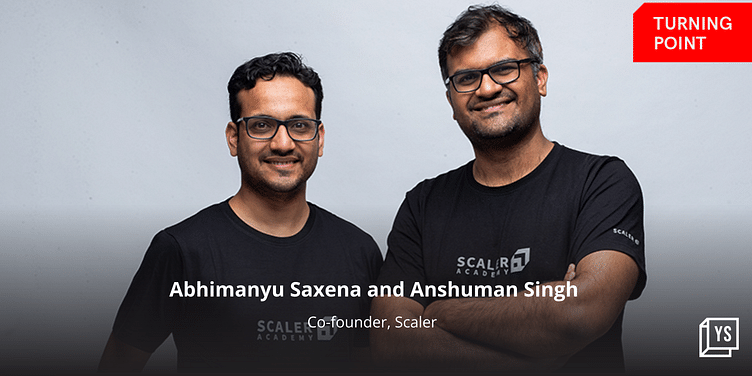 The Turning Point is a series of short articles that focuses on the moment when an entrepreneur hit upon a winning idea. This week, we look at the skilling platform Scaler.

India’s tech sector is in the midst of exponential growth. However, this has also led to a talent crunch, especially in large organisations which are on a constant lookout for developers. This gap between tech demand and supply is expected to increase to over 3.5X by 2026, according to a NASSCOM report.

Abhimanyu Saxena and Anshuman Singh, who worked with the tech teams of Fab.com and Facebook, respectively, saw an opportunity to bridge the gap. In 2019, the founder duo launched ﻿Scaler﻿ as an edtech startup focused on upskilling college students and tech professionals in the country.

Co-founder Abhimanyu tells YourStory, “Building a high-performance tech team is one of the most critical things for any tech startup. We realised that there is a massive scarcity of tech talent that exists.”

“We felt like this is a very important problem statement to be solved as on one hand, industry growth is being strangled because they do not have enough tech talent available in the country, and on the other, unemployment is a massive problem for all the people who are graduating with engineering degrees,” he adds.

From InterviewBit to Scaler

Before Scaler, the founders started InterviewBit in 2014. Developed on a similar concept as Coursera and edX, InterviewBit served as a free learning platform but with a focus on getting employed. It had a six-month long programme to prepare graduates and tech professionals for interviews at tech companies.

The founders share that while the company organically onboarded three to four million users on the platform, the course completion rate was very low. Introspecting on the issue made them realise the need for community-based learning and mentorship

They looked at learning methods employed by top universities such as MIT which focus on mentorship, community, and peer-to-peer learning which had the potential to be replicated in India. Abhimanyu says that Scaler is built on that very concept.

Started with only one programme for software engineers, the upskilling platform currently also offers courses for data science and machine learning as well.

Scaler claims to be adding 2,500 learners monthly, and since April 2019, it has onboarded and helped 25,000 learners cumulatively. The company also shared that the course completion rate stands at 90%, and the placement rate is 94%, claiming an average salary hike of 2.3X post its programmes.

The total capital raised by Scaler stands at about $76.5 million, of which the company says they spent about 20% towards acquisitions while 70% is still in the bank.

As part of its future plans, Abhimanyu shares that the company will be doubling down on the Indian and US markets, and will be focused on expanding its reach.

Apart from this, the company is also planning to launch a product focused on honing skills during college to match the market demands as soon a student graduates.