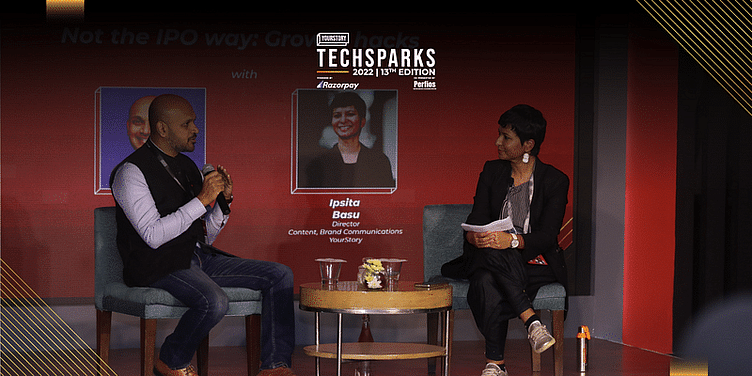 Among the many themes and tracks discussed in TechSparks 2022, understanding how to accelerate the growth of companies was a major highlight. Here’s a peek into how you can craft the right growth strategy without an IPO.

Over the past few years, several companies that have gone public have earned huge influxes of cash, contributing to the growing stock market in India that is generating billions of dollars in IPO. This has enticed owners and partners of many privately-owned companies to pursue an IPO (initial public offering) in hopes of similar returns.

However, these turbulent times of tanking stock prices have proven that going IPO is much riskier than one may have anticipated. This is causing owners to rethink how they can raise capital and generate money without filing for an IPO.

To chalk out a plan for growth without treading down the IPO way, Ipsita Basu, Director - Content, Brand Communications, YourStory engaged in a fireside chat with Skanda Jayaraman, CEO, Qapita-Marketplace at TechSparks 2022.

Talking about the trickling down of IPO filings this year, Skanda opined that there is a likelihood of a slowdown in how money markets value and reward companies for the next 6-15 months. “It is clear that the outlook for the next few quarters is going to be a lot tougher than what it was in 2021,” he said. Alluding to a few companies’ decision to go public in the past year, he noted the steep correction in the form of low stock prices in those companies.

“There is a message that the market is giving, that whilst there is enough domestic equity, it’s not for everybody,” he said, adding that the more pertinent question to ask is whether IPO is the only route to grow or if there are other routes that can be explored.

Pros and cons of having an IPO

Skanda believes that while a good IPO and a successful listing is every founder’s dream — given its many benefits, such as access to global pools of capital — the intrinsic motivation for many companies choosing to go IPO is to provide liquidity to existing stakeholders.

“The trouble is, an IPO is never the endpoint; it’s always the starting point,” he said, adding that companies are answerable to an analyst every quarter. Most businesses are not quarter-on-quarter, as they may have life cycles longer than a year, but they must still report results every quarter. Going IPO may not be the right route for them as several such companies that have gone IPO prematurely have seen their stock prices suffer.

Why is it important for private companies to offer liquidity solutions? “As a founder, there is an obligation for you to give an exit,” said Skanda, adding that one is obligated to find liquidity to the people who backed them when they were much smaller or in different stages based on their capital requirements.

Talking about the generational shift of perception of employment as a whole, Skanda highlighted that liquidity seems like an obligation even to employees because they now want to work in companies where they have skin in the game.

Creating wealth in a few clicks with Qapita

Skanda emphasised that Qapita aims to build a digitised workflow to enable quick and efficient transactions through a single window system in the hopes of doing away with the long winding paperwork processes that private company shares usually involve.

Besides, Qapita also provides a single platform for HNIs, family offices, and other investors to access opportunities to invest in the private marketplace. The platform is designed to provide upfront information about tax implications and earnings to employees looking to sell shares through a liquidity program, said Skanda, adding that it is “reducing information asymmetry and bringing a lot of transparency into that system”.

He noted that there is a trend wherein companies now stay private much longer than in the past because there are many other options available today. “Private markets are not as illiquid as they were, let’s say, 10-15 years back,” he said, adding that many people are investing in startups today, making it a mindset. Skanda emphasised that companies should question why they must go public if they have access to pools of capital until they are comfortable with the quarter-on-quarter business.

With this background, Qapita comes in to plug in the inefficiencies and reduce the information asymmetry to help companies stay private much longer, he said.

“I think the public market investors are backing companies which are at a very different stage of evolution,” said Skanda, adding that they come in at a later stage of growth, where they can assess value and adjust prices based on a clear pattern of earnings that serves as a track record. Private market investors, however, come in for the long term, which makes it a high-risk category.

He doesn’t think there is a structural problem in both the public or private sectors in terms of money flow for the next 3-5 years in India. The problem is people thinking of a funding winter based on how 2021 went which, he said, wouldn’t happen for the foreseeable future. “But if you had to index it back to 2019, then you’re not in a bad situation at all,” said Skanda, adding that everyone needs to recalibrate their expectations on what valuation is.