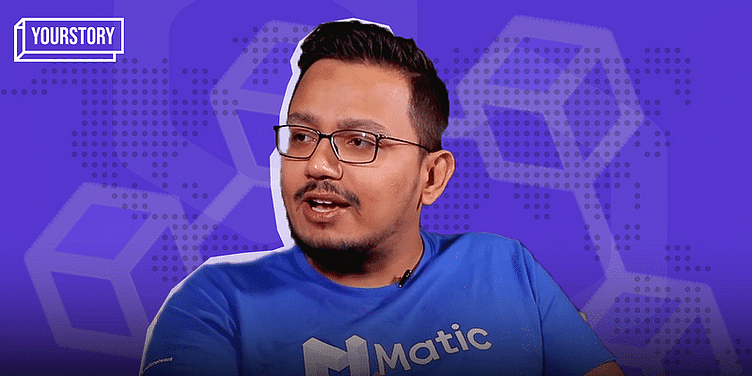 Polygon co-founder Sandeep Nailwal never planned to become an entrepreneur. Today, he is a founder of a multi-billion dollar company and is setting his sights on making it one of the biggest companies in Web3.

In Delhi, the settlements on the eastern banks of the river Yamuna are referred to, often dismissively, as ‘Jamna-Paar’ (Yamuna-paar).

The affluent, have usually settled along its western banks, while “Jaamna Paar” was often perceived as a ghetto and its people were looked down upon. Sandeep Nailwal—co-founder of multi-billion-dollar Web3 firm ﻿Polygon﻿—has long called Jamna-Paar home.

“I was born to a poor, peasant farmer family in Ramnagar, Nainital, and we migrated to Delhi. Living in that ghetto-like environment, it was customary for members from poor families like ours to work menial jobs. In fact, my grandfather worked as a house help,” Sandeep says.

In his neighbourhood, it was fairly common for children to not finish school and drop out by the time they reach 10th grade. Some of the men also fell prey to alcoholism and gambling.

The drive to succeed came when Sandeep saw his own father fall victim to these vices. Having also witnessed incidences of domestic violence in his own home - he was determined to continue studying beyond tenth grade.

“I always said I will be a big man. I didn’t want to play small, and hated losing, but I had no clue how to succeed. Everyone made fun of me,” he says. This undoubtedly set the stage for Sandeep’s personal success and his success with Polygon.

“The determination to win, build a better life and become a big man came from a place of pain and suffering. I had several examples in my own family and community of the kind of man I did not want to be. Many people in the community also stopped treating me with dignity when they learned of my father’s problems,” Sandeep explains.

Led by Sandeep and his co-founders, Polygon has grown into a global, industry-leading platform for over 40,000 decentralised applications. Its native token MATIC has a market cap of over $7 billion, at the time of writing.

Sandeep looked to Mark Zuckerberg and his success with Facebook to inspire his own journey as an internet entrepreneur. Today, he juggles many hats as an active guide, mentor and angel investor, having touched the lives of several founders and builders in Web3.

At one point in Sandeep’s life, entrepreneurship was not on the cards. He had failed to crack IIT and had the option to join the merchant navy business and earn a good income. Having relied on bank loans to complete his computer science engineering and MBA courses, he began working a job to pay them off and also to buy a house.

“It was cliche that I thought I needed to buy a house, because it was customary for a man to own a home so he could get married. My now-wife told me it was okay to forget about owning a home, and said it was fine if we lived in a rented home. She urged me to pursue my entrepreneurial dreams,” he says.

Unable to shake the entrepreneurial bug, he quit his job, took two weeks off, and began Scope Weaver - a blockchain services startup - in early 2016.

Meanwhile, a data scientist at Housing.com, Jaynti “JD” Kanani, who would soon become his co-founder, had identified a weakness in the Ethereum blockchain.

Ethereum’s creators never imagined it would achieve large-scale adoption to the extent it did. As a result, they had not programmed any large scale capabilities to handle several hundred thousand transactions per second.

It was when the NFT project CryptoKitties overloaded and congested the network did JD realise there was a need to build an Ethereum scaling solution.

“At the time, there was a mania for Initial Coin Offerings (ICOs). Blockchain projects were posting their whitepapers online, raising money without a product to show for, and then fizzling out,” Sandeep recalls.

When JD met Sandeep, there was synergy, and they decided to work together on this project. Together with another co-founder (Anurag Arjun) Matic Network was launched in 2017.

With a registered address in Mumbai, and working out of a house in Indiranagar, Bengaluru, the trio set out on their journey. While JD worked on the programming and engineering side of things, Sandeep and Anurag took care of the rest.

Matic had the easy option of riding the wave and raising a cool $15-$20 million, but the co-founders rejected the idea. Taking the easy route and building something temporary was against Sandeep’s philosophy of becoming a big man.

“Matic was solving a long-term problem, and so we had to choose slower ways of growing. For me, it was all about making sure we had limitless possibilities. If we raised a lot of money from external investors during the initial years, it may have limited our potential and our own vision,” he says.

At that point, Matic didn’t have its product ready, so it chose to raise only a limited amount of funding - $5 million from Binance - in an initial exchange offering that saw the founders sell a portion of the MATIC tokens they held.

“I had the responsibility to make sure Matic continued running. I used to shiver when making the difficult decision to not raise a larger sum of funds,” Sandeep recalls.

Historic day for crypto as The Merge completes, Ethereum transitions to PoS

Challenges as an Indian founder

Then, the worst hit. While progress on the Matic product was going well enough, the 2018 bear market meant funding dried up fast. At the same time, Sandeep found that startups in Silicon Valley were able to raise funds.

“People who studied in Stanford and other top colleges were still able to raise funds. There was a perception that Indians couldn’t build software infrastructure companies. Folks in the industry referred to Indian founders like us as ‘pajeets’ - a derogatory and ethnic slur,” Sandeep explains.

Matic approached investors, but with no luck. Sandeep recalls a few investors being disrespectful towards the Indian startup, and having already made up their minds on not investing in Matic even before the pitch was made.

The light at the end of the tunnel came through Mihailo Bjelic, an engineer from Serbia, who believed in Matic’s vision and joined as a co-founder. Eventually, burning through the midnight oil, keeping their head to the ground helped luck turn in their favour.

In 2021, the co-founders decided to take a broader approach to solving Matic’s problem statement. Rather than just building one PoS chain, they would use the same idea to build an internet of scalable blockchains around Ethereum.

The same year, they caught the attention of US-based tech billionaire Mark Cuban and raised an undisclosed amount from him.

Along these lines, Matic eventually rebranded to Polygon, and it has not looked back since.

The year 2021 was marked with a number of milestones – it released its SDK, which allows developers to deploy Ethereum-compatible chains at speed using in-built EVM and a set of pluggable modules.

It also raised $450 million in its first-ever major VC financing round, led by Sequoia Capital India at a market cap of $14.4 billion.

The current impact of Polygon

In mid-2021, Polygon had around 400 decentralised applications running on its platform. Today, it has over 40,000.

It has also partnered with the likes of Meta (Instagram), Starbucks, Reddit, Flipkart and others to introduce Web3 products to the masses.

Being at the helm of this industry-leading project, it's safe to say Sandeep is a “big man”. But he still doesn’t feel like one.

“Even at the peak, I feel we are small. It continues to drive me. I still have the day zero attitude, and so does the team. We have to make it to the top and become a top three project, alongside Bitcoin and Ethereum,” he says.

“I don’t feel the success at all. I don’t look behind. And now, we have all the expectations from the Indian community. It's a responsibility. There’s no way we can fail from here.”

While Sandeep has come a long way since Jamna-Paar, his upbringing continues to impact him, sometimes negatively. To him, success has come at a cost.

“Till recently, I was on medication for stress-related issues. Only after medication would I feel like myself. When receptors for happiness are not being used much, each day becomes an existential threat,” he says.

“Now, I am slowly finding ways to feel happiness. Recently, my baby was born, and has been a tremendous source of joy. I am also interested in exploring meditation. My inner journey has come from a place of suffering, and all the negativity has given rise to learning.”

Having faced these challenges himself, he has become vocal about mental health and stress-related issues, and has also been giving back to various communities.

During the peak of the COVID-19 pandemic, Sandeep started Crypto Relief - a community-run fund that raised over $475 million to help Indians in need of healthcare services. It has disbursed over $58 million in grants so far, and published a transparency audit/report on the same.

He has supported several economically-backward communities. He sees himself (and his family) in these people, he says.

“We have been donating some money to help folks in those areas. If someone doesn’t have enough funds to organise a wedding, we help out. My parents even go as chief guests. Things have changed a lot for them,” Sandeep notes with pride.

For now, Sandeep continues to think forward. His mission is building Polygon into a top three project. Although, he notes that his mother says he should take things easy and enjoy life first.