TechSparks 2022: Highlights from the session on understanding changing brand perceptions 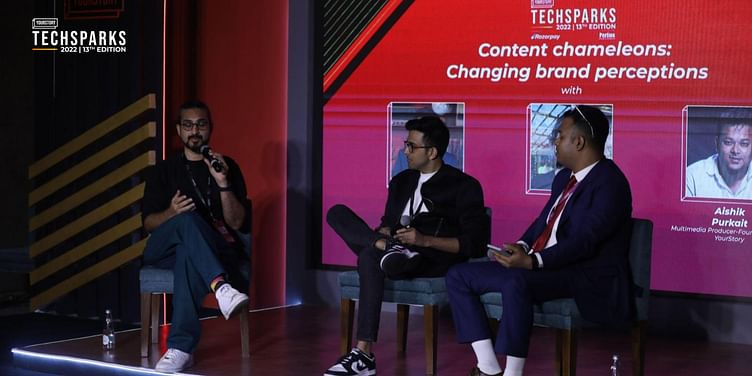 On Day 1 of TechSparks 2022, Advait Gupt and Ayush Wadhwa discuss the trends, formulas, and existing opportunities in the digital media space, in a panel discussion on 'Content chameleons: Changing brand perceptions'.

Today, content is king. Brand perceptions are subject to change, positively and negatively, and realising the same, brands—small and large—are catching up. Amid this, new-age unconventional media networks are gaining momentum.

Kulfi Collective and Owled Media are among the brands that are increasingly gaining consumer attention. Why? Because of their non-traditional approach towards AdTech as a whole.

To understand everything surrounding cracking the code of standing out in this fluid creative market, TechSparks 2022 saw a panel discussion on ‘Content chameleons: Changing brand perceptions’.

Ayush points out how surviving in this period—wherein the consumer spectrum of sharing a common liking towards particular content varies substantially—itself is a task to master.

Reflecting on the mistakes he made earlier in his career, Ayush states, "The [creative] landscape is very competitive, so you need to have a different/ clearer vision to start in something which is already very crowded."

Advait further highlights the complexity of the digital landscape saying, "Web3 is adding to the [digital landscape] complexity, in some shape or form, but it is also creating more opportunities. We are at a stage where experiences are going to become far more important than the content itself, and that is a trend we are very excited about."

Standing out in the market

Advait has simple advice on making this happen. "Find your niche and stick to it. It is not about going wide, it is about going deep," he says.

He also stresses the importance of tapping into India's contemporary technology and talent for success. "India has a huge competitive advantage when it comes to talent. So, talent in one, and technology is the other." he adds.

Reflecting on the technology aspect, Ayush touches on the idea of shortening the process of making content. He says," Overall, it is about thinking how can something be done, which was earlier done by hundred people but can now be achieved by 10-20 individuals and still be human-driven."

Further, Ayush's go-to formula is similar to Advait's. He highlights the benefit of agencies offering specialised services that make a mark.

He says, "I believe that after a point, startups would want specialised services. So, to find that niche and offer specialized services would help."

The next important thing according to him is agility—and we can not agree less. Living in a world of tech evolutions means keeping pace with the latest technologies and developments to stay afloat.

Shaping the next decade

Ayush's desire for Owled Media's roadmap for the next decade includes making it one of the few agencies that can create a global impact. Ultimately, the goal is to build a stronger network, and bring more entrepreneurs into the company's ecosystem.

Advait highlights how the content community commerce has a huge opportunity in the coming years.

Adding to the same, Ayush highlights how, at present, creators are a team in themselves, doing production, direction, and everything in between, single-handedly.

Adding to what's in store for the future, Ayush says, "The opportunities in Augmented Reality at the moment are massive, however, the competition is minimal. The opportunities further, are not just on the services-end, but also on the education and brand-end."

As the session concludes, Advait, adding to Ayush's perspective, hints at the growing opportunities in the whole mixed reality ecosystem, be it in virtual reality, or augmented reality, or a combination of the two.