Developers have a decision to make: Red Hat's Mithun Dhar on open-source software 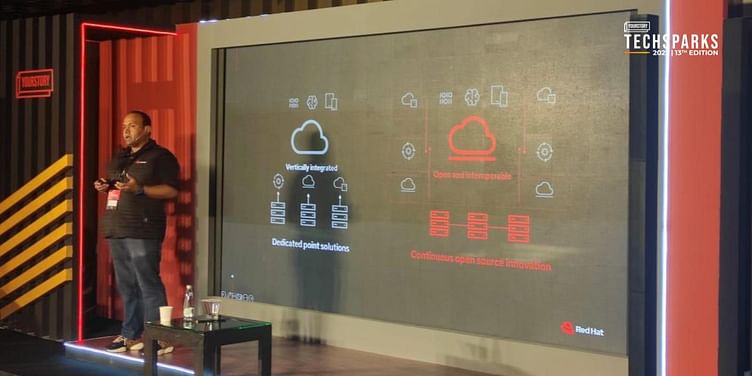 Experts across the world are deliberating on the future of open-source software in a rapidly changing digital world. According to marketsandmarkets, the global open source services market size is expected to grow at a CAGR of 18.2%, reaching $50 billion by 2026 from $21.7 billion in 2021.

In line with the overarching theme at TechSparks 2022—'Building on India's tech agenda'—Mithun T Dhar, VP and GM, Developer Tools and Programs Business Unit, Red Hat, delivered a keynote on 'What lies ahead for open-source?'.

He began by highlighting that the most difficult part of building companies or products is often acquiring software. The solution to that challenge lies in open source, he said.

Mithun recalled that the past few years have been challenging for those in the field, especially post-COVID-19, as there was a surge of startups following a digital-first approach amid better opportunities.

He said, "Whether a startup, a well-established brick and mortar company, a hundred-year-old company, or a brand new company, every company is realising that if they do not embrace a digital-first strategy, they are doomed. The scale of innovation that happens and customers' expectations are both at a mismatch currently, and when you become a digital company is when it matches."

Further, scaling is an important aspect for those in the sector because the digital revolution is happening at a global level.

Mithun added, "Developers have an important decision to make - whether you go with a vertically integrated full-stack or you go with a more open, interoperable and innovative stack that is contributed by yourself and others."

"This is a very critical question to answer because what you decide upon will be the foundation for what you have built because of how you innovate and reach out to your customers. Therein lies the complexity because most of the customers that we have spoken with are often unaware of the existence of an open source technology, of its use in 'real' industries or about whether or not it is regulated. And we always have the data and the facts to support those questions," he added.

Today, open source is omnipresent. "That [the omnipresence] is where the power, stability and reliability of open source come into the picture. In fact, there are more than a million open source projects out there, contributed by millions of developers across the spectrum," Mithun reflected.

Now is the best time to build a company: Shailendra Singh

Can one company alone be better than a bunch of developers contributing to open source?

Mithun stated the numbers. "There are over one million upstream projects on open source. If you go to GitHub, there are over 200 million repositories that are worked by 83 million developers panning four million unique businesses—small, large, medium—any size. The developers from those companies are contributing, collaborating, and innovating on the use cases that you and your teams are working on."

"Think about the scale and pace innovation happening. Various people coming together, contributing and making the software so much better The hallmark of any thriving community is the velocity of change. The workflows, the automation, if you are leveraging open source, you do not need to build it all over again. You already have it," he added.

Mithun's advice to developers? "Build your skills, try to contribute to the open source projects upstream as well as you are consuming and leveraging that."

"The world's fastest developer ecosystem is in this country. Apart from leveraging open source and consuming it, contribute back. Leaders who are leading IT departments, within your respective companies, put an open source strategy, build an open source office and tackle an open source-first approach because together we can make it better," he concluded.